SAY IT LOUD! AN ANNUAL SYMPOSIUM ON LIBERATION, JUSTICE AND EQUITY IN THE MUSIC INDUSTRY 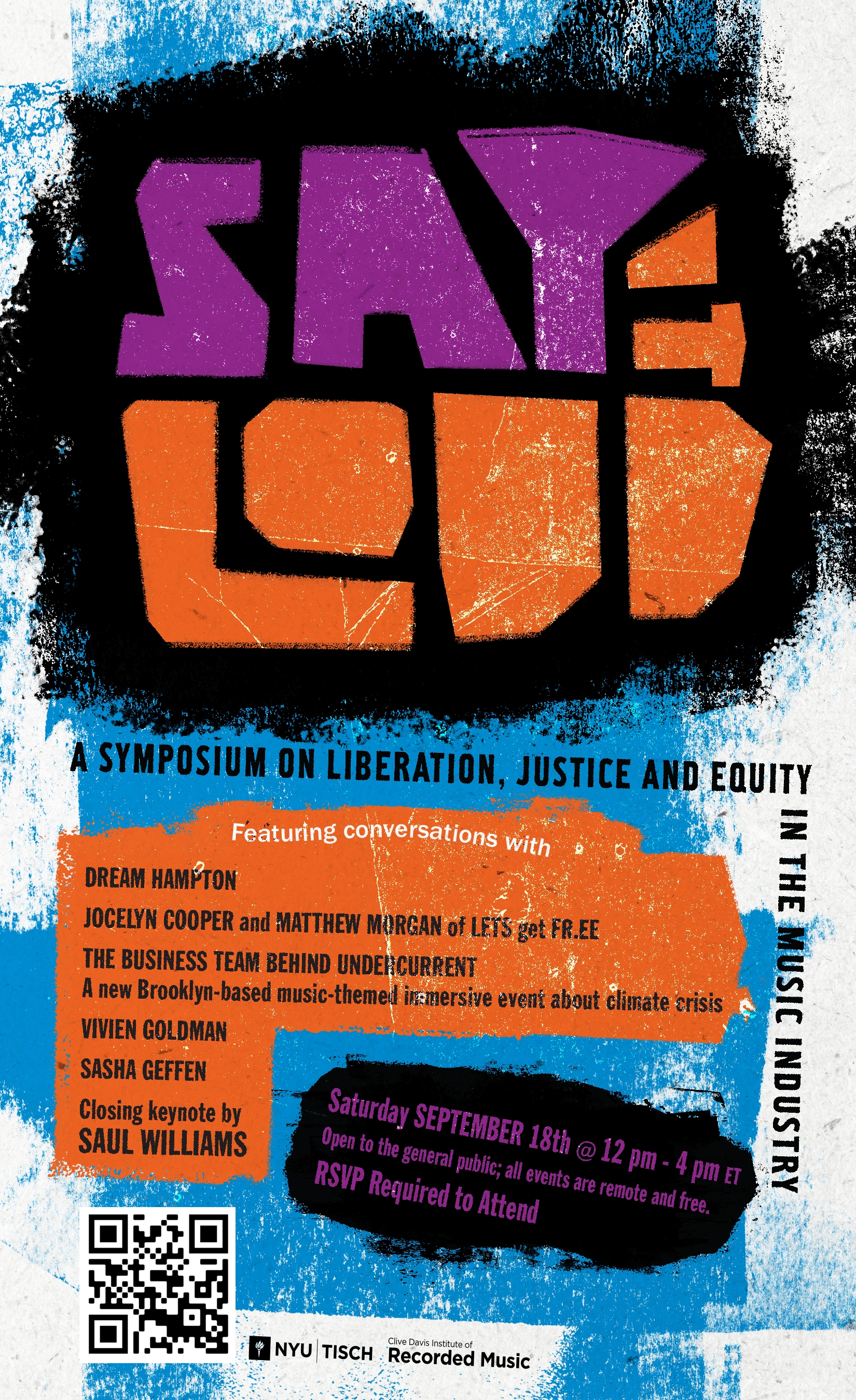 SAY IT LOUD! A Symposium on Liberation, Justice and Equity in the Music Industry

Saturday September 18th from 12:00 pm on: a day of online programming that is open to the general public; all events are remote and free.

How to Get Tickets: An RSVP is required. Here is the RSVP Link

DESCRIPTION: The Clive Davis Institute of Recorded Music at New York University is hosting a symposium, curated by students and by faculty, to bring awareness to issues of social justice and liberation as we sustain our commitment to reimagining an inclusive, diverse, and equitable music industry.

This year’s inaugural symposium will focus on the theme of accountability, and will point to ways of ending toxic systems of domination and abuse in the music business, and beyond. Through panels, performances and activities, the symposium will consider how we go about creating transformative change in a world where marginalization and exclusion are still too often the norm. In its focus on the power of musicians and the music industry to make a lasting difference, Say It Loud will address today’s most pressing social issues, including climate change, anti-black discrimination, transphobia and homophobia; and toxic masculinity.

ONLINE, FREE AND OPEN TO THE GENERAL PUBLIC

10:30 am - 12:00 pm - ONLINE FILM SCREENING: WHITE RIOT (special tickets required to attend this screening) Directed by Rubika Shah, WHITE RIOT is a 2019 documentary film that takes a closer look at the British organization Rock Against Racism—one of the rare anti-racist music organizations, in which white musicians and musicians of all colors organized and mobilized against racism and fascism. The New York Times describes the film as “a compelling depiction of political organizing in the 1970s.”

12:00 - 12:05 pm - INTRODUCTION AND WELCOME TO SAY IT LOUD with JASON KING, Chair of the Clive Davis Institute of Recorded Music

12:05 pm - 1:00 pm - HOW THE MUSIC INDUSTRY CAN RESPOND TO THE CLIMATE CRISIS An Online Panel Discussion with members of the business team of UNDERCURRENT and the Sonic Branding Agency LISTEN: STEVE MILTON (Founder), ALEX CZETWERTYNSKI (Creative Director), BROOKE LEAL (Marketing Director), and MICHAEL DELLE DONNE (Partnerships Director). Undercurrent is a new Brooklyn-based immersive event curated by sonic branding agency Listen/ADA, brings together over 40 musicians, artists, creatives—including Grimes, The 1975, Miguel and Jorja Smith—as well as and nonprofit partners to present their reactions to the Climate Crisis with more than ten original audiovisual art installations.

1:00 - 1:30 pm - ON WHITE ALLYSHIP AND ANTI-RACISM IN THE MUSIC INDUSTRY An Online Talkback Conversation about the Film White Riot featuring writer/scholar VIVIEN GOLDMAN. Vivien Goldman is a London-born writer, broadcaster, adjunct professor and post-punk musician who teaches courses on punk at the Clive Davis Institute.

1:30 pm - 2:00 pm - ON BREAKING AND TRANSCENDING THE BINARY IN POPULAR MUSIC An Online Conversation with SASHA GEFFEN, author of the 2020 book Glitter Up the Dark: How Pop Music Broke the Binary. From the Beatles to Prince to Perfume Genius, Glitter Up the Dark takes a historical look at the voices that transcended gender and the ways music has subverted the gender binary.

2:00 pm – 3:00 pm - HOW THE MUSIC INDUSTRY CAN HELP END VIOLENCE AGAINST WOMEN AND GIRLS a conversation with writer, Surviving R. Kelly filmmaker and activist DREAM HAMPTON. dream Hampton is an award-winning filmmaker and writer from Detroit. Her most recent works include the Frameline feature documentary Treasure (2015), the HBO feature documentary Treasure (2015), the HBO feature documentary, It’s a Hard Truth Ain’t It (2019), the BET docu-series Finding Justice (2019) and Lifetime’s Emmy nominated Surviving R. Kelly (2019, which broke ratings records and earned a Peabody Award. Hampton was named one of the 2019 TIME 100’s most influential people in the world.

3:30 pm - 4:00 pm - CLOSING ONLINE KEYNOTE: SAUL WILLIAMS, ARTIST & ACTIVIST Saul Williams has been breaking ground since his debut album, Amethyst Rock Star, was released in 2001 and executive produced by Rick Rubin. After gaining global fame for his poetry and writings at the turn of the century, Williams has performed in over 30 countries and read in over 300 universities, with invitations that have spanned from the White House, the Sydney Opera House, Lincoln Center, The Louvre, The Getty Center, Queen Elizabeth Hall, to countless, villages, townships, community centers, and prisons across the world.

*all times and speakers scheduled to change