MUSIC, SCIENCE AND THE FUTURE: A CONVERSATION ON INNOVATION, TECHNOLOGY AND MUSICAL CREATIVITY 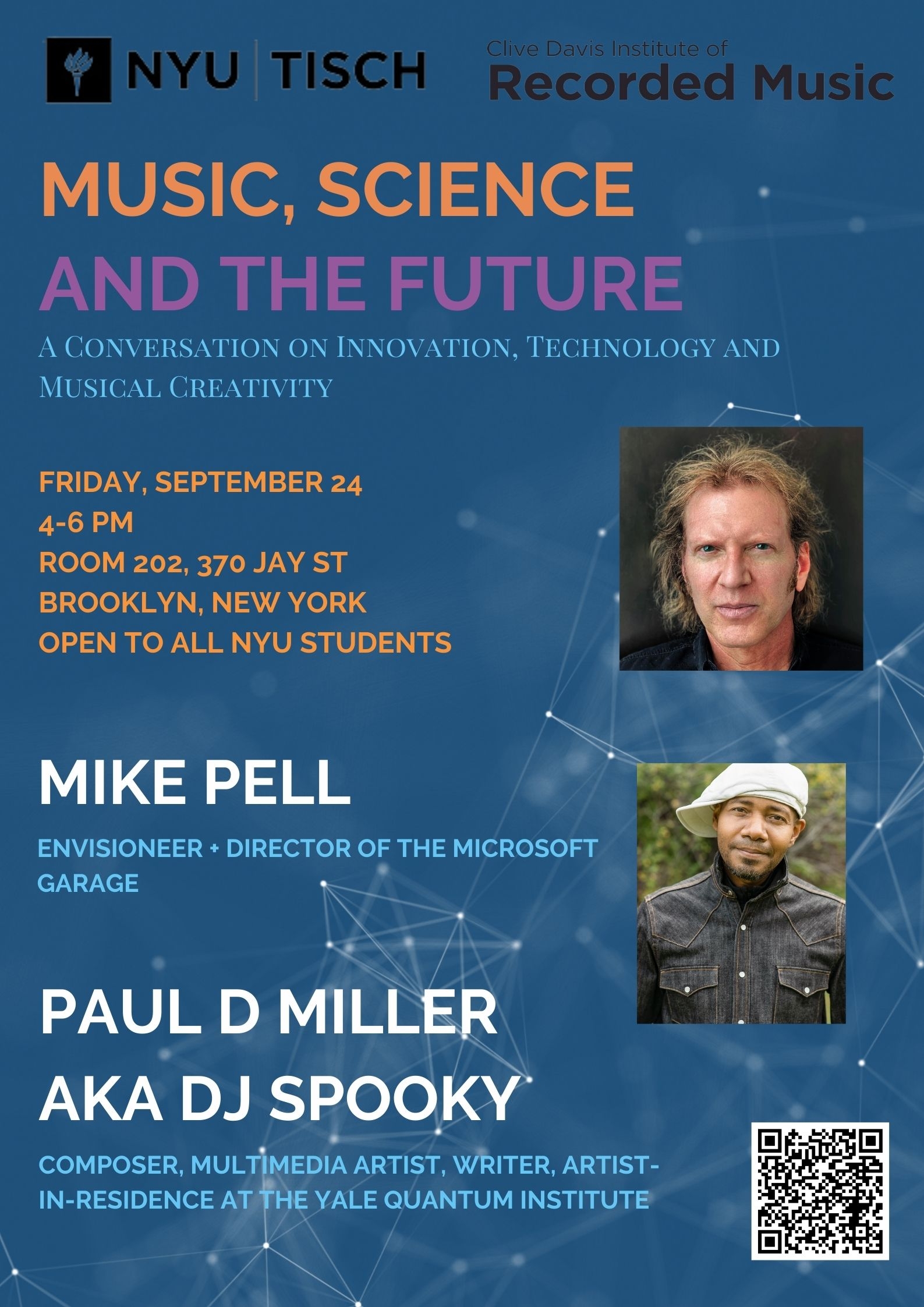 MUSIC, SCIENCE AND THE FUTURE: A CONVERSATION ON INNOVATION, TECHNOLOGY AND MUSICAL CREATIVITY

MUSIC, SCIENCE AND THE FUTURE:
A Conversation on Innovation, Technology and Musical Creativity

In this moderated conversation and Q&A, Mike Pell of the Microsoft Garage and Paul Miller, aka DJ Spooky, present their latest, cutting-edge research into how technologies like brain mapping, mixed reality, VR, AR, and data visualization, are shaping the future and changing the ways musicians and music industry wield their creativity and approach their careers.

Mike Pell
Mike Pell—a longtime designer and coder of software who is one of the key people responsible for introduction of MenuFonts on the original Macintosh in 1984, as well as Adobe Acrobat in 1990, is currently the Design Lead for NYC's The Garage. The Garage is Microsoft's official outlet for experimental projects and part of a worldwide program for curiosity-fueled explorations and innovation. The Garage has just opened a new multi-floor building on Houston Street and Lafayette in Manhattan. Mike's role is to turn people's best ideas into reality every day, working at every altitude of Design, and across all aspects of Engineering. Mike is the author of Author of: “Envisioning Holograms” (2017) which has been has been called a must-read for next generation storytellers and digital explorers; and “The Age of Smart Information” (2019), which has been praised as a clear vison of the future of communications.

DJ Spooky
Paul D. Miller, aka DJ Spooky, is a composer, multimedia artist, and writer whose work immerses audiences in a blend of genres, global culture, and environmental and social issues. Miller has collaborated with an array of recording artists, including Metallica, Chuck D, Steve Reich, and Yoko Ono. His 2018 album, DJ Spooky Presents: Phantom Dancehall, debuted at #3 on Billboard Reggae.

His large-scale, multimedia performance pieces include “Rebirth of a Nation,” Terra Nova: Sinfonia Antarctica, commissioned by the Brooklyn Academy of Music, and Seoul Counterpoint, written during his 2014 residency at Seoul Institute of the Arts. His multimedia project Sonic Web premiered at San Francisco’s Internet Archive in 2019. He was the inaugural artist-in-residency at the Metropolitan Museum of Art’s The Met Reframed, 2012-2013.

In 2014, he was named National Geographic Emerging Explorer. He produced Pioneers of African American Cinema, a collection of the earliest films made by African American directors, released in 2015. Miller’s artwork has appeared in the Whitney Biennial, The Venice Biennial for Architecture, the Miami/Art Basel fair, and many other museums and galleries.