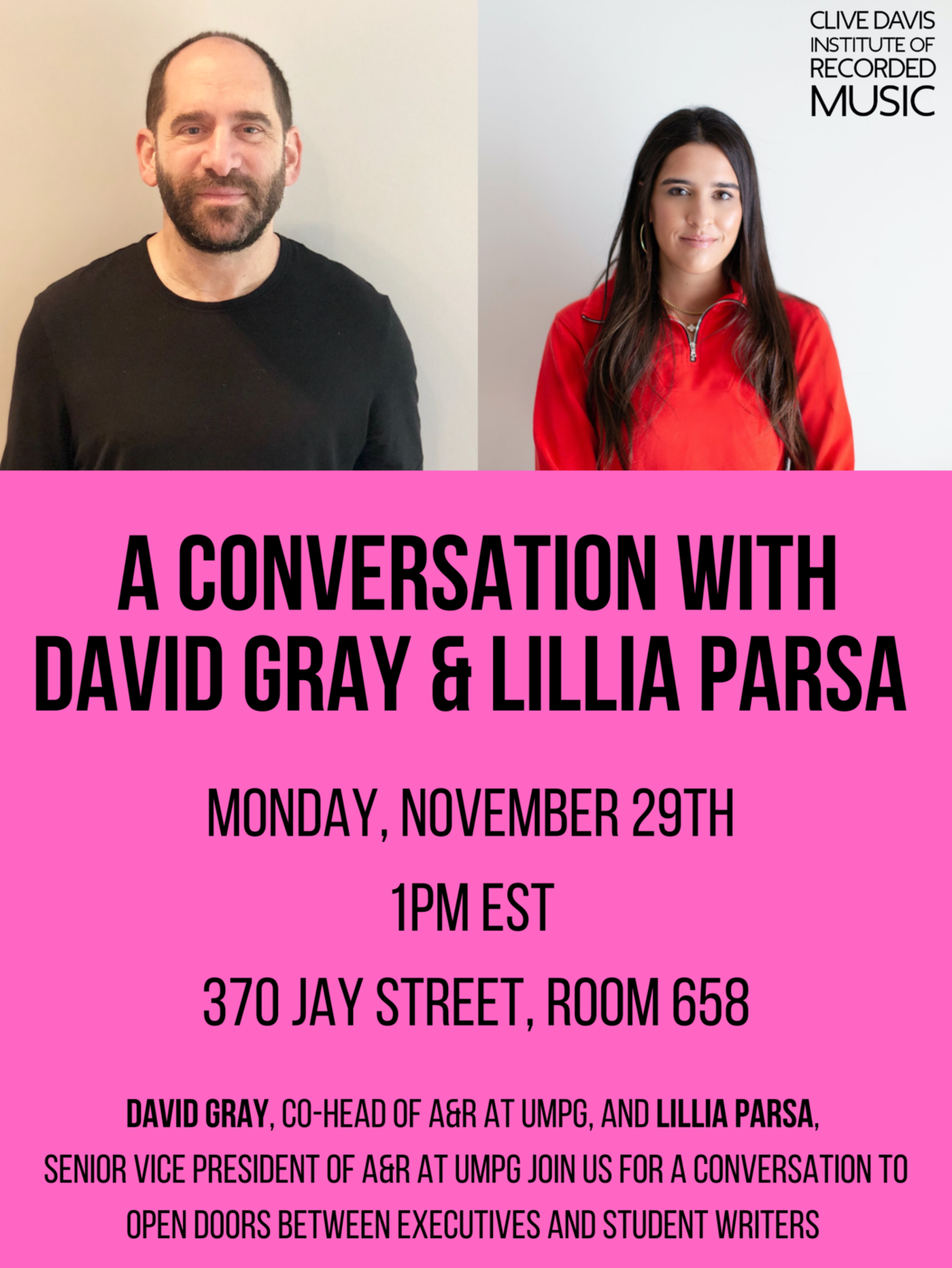 CDI students are invited to attend a special conversation between David Gray, Co-Head of A&R at UMPG, and Lillia Parsa, Senior Vice President of A&R at UMPG. The point of the conversation/Q&A is to open doors between executive and student writers for guidance in the early phases of their careers. Mentorship & guidance is a pivotal pipeline that is essential for success for creatives in music. Mentorship within executives is as important for the growth business as mentorship from executive to artist/creative is important to foster the growth of their craft. Collaboration between creatives and executives can inspire new ideas and build upon the foundation of a song and (in a larger sense) a career. Due to the manner in which David has mentored Lillia throughout her career, they together have been able to mentor writers and encourage their growth.

Lillia began her career managing musicians while in college at USC. After college, she transitioned into an A&R role at Prescription Songs. In 2018, she was hired at UMPG as an A&R manager and since have risen to SVP. Since at UMPG, she has generated a robust roster of diverse clients due to my unrivaled ability to spot talent early and develop an artist. Even in just her first signing, she recognized the potential in 19-year-old aspiring songwriter, Nija Charles. Charles has gone on to work with Beyoncé, have several Billboard Hot 100 Top 10 Hits, earn several Grammy nominations, and credits on multi- platinum records. She also recently co-wrote Lady Gaga’s Billboard number 1 hit “Rain on Me” (with Ariana Grande). Her signings range in genres, age, and experience level; from the emerging rapper’s Tierra Whack and Lil Tecca to the jazz/pop/reggae group Surfaces. Parsa works closely with superstar songwriters Lou Bell, Billy Walsh, Julia Michaels, Cirkut and Brian Lee. During the pandemic, she signed and began developing hitmakers Omer Fedi & Blake Slatkin. Fedi and Slatkin have been taking over the charts through their work with The Kid Laroi and and Lil Nas X. Throughout her career, she has been devoted to fostering the talents of writers, whether big or small, and looks forward to overseeing the success of her talented roster.

David Gray started his career as lead singer and writer for the alternative rock band, Idle Wilds who were signed to RCA Records in the mid 90’s. David was also signed to MCA/Universal Publishing. David moved to the executive side in 2001 working as an A&R manager at Zomba Publishing which was the publishing arm of Jive Records whose artists included Britney Spears, N’Sync and the Backstreet Boys. In 2003 David started his first label A&R job at Sony Music International/Daylight Records where he worked hands on with the global Sony Records roster as well as the artists on David Massey’s Daylight records which included Cyndi Lauper, Anastacia and Delta Goodrem. In 2008 David was brought on to be the first US A&R person for Simon Cowell’s Syco/Sony Records label and made records with artist such as Leona Lewis, Il Divo, Westlife and Alexandra Burke. In addition David oversaw casting and music for X Factor US and America’s Got Talent. In late 2013 David joined Universal Music Publishing and shortly thereafter became Co-Head of A&R for the US. David’s signings at UMPG include Shawn Mendes, Demi Lovato, The Jonas Brothers, Julia Michaels, Logic and Tommy Brown. David also re-signed former Clive students Take A Daytrip and helped them build a JV publishing company at UMPG.