Virtual Event Via Twitch Map it 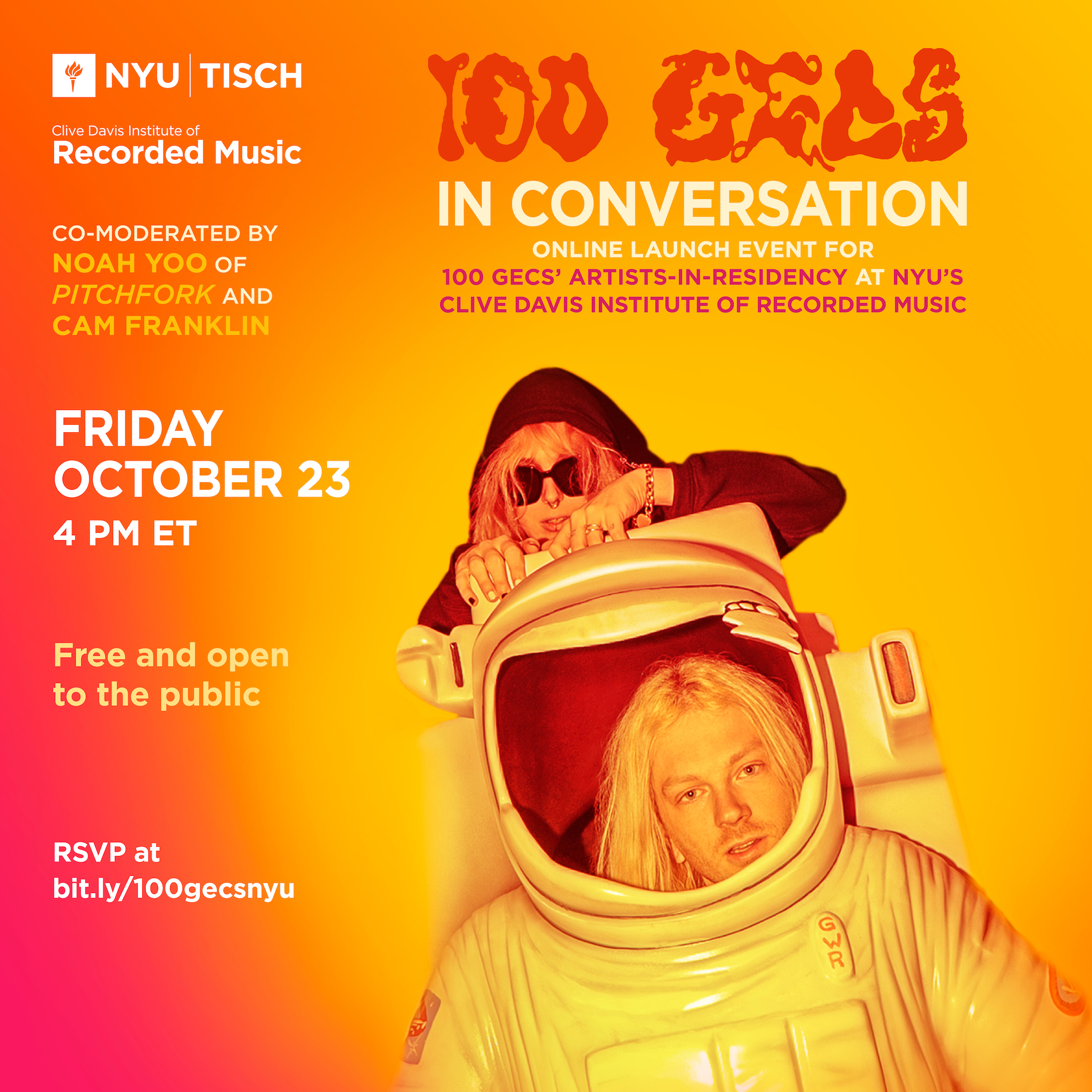 The groundbreaking pop duo will kick off their residency with a moderated Q&A event on October 23rd at 4:00 p.m. ET (open to the public)

100 gecs, the duo of Dylan Brady and Laura Les, will join the Clive Davis Institute of Recorded Music at NYU’s Tisch School of the Arts as artists-in-residence for the 2020-2021 academic year.

100 gecs will kick off their residency with a 90 minute, in-depth Q&A conversation on Friday October 23 at 4:00 p.m. ET, co-moderated by current student Cam Franklin and Clive Davis alumnus and Pitchfork staff writer Noah Yoo. The virtual event will explore the duo’s production philosophy and pioneering musical style, their musical releases to date, their innovative use of technology in boldly reimagining live and virtual performance and creating the 100 gecs expanded multiverse. The event will stream live on Twitch and is open to the public.

100 gecs will host several virtual events and workshops with students in the fall 2020 and spring 2021 semesters, including private and public conversations and small group sessions with Brady and Les, as well as members of their team.

“The effortlessly authentic duo of 100 gecs exemplifies what we hope all of our students are able to embody as they journey through the Clive Davis Institute and beyond. Constantly shifting their modalities of production and performance, Laura and Dylan are communicating with gestures of experimentation and fluidity that are viscerally shifting the boundaries and possibilities of popular music,” said JD Samson, assistant arts professor at the Clive Davis Institute of Recorded Music.

1000 gecs was selected as a ‘Best Album of 2019’ by the New York Times’ pop music critics, claiming the #1 spot in Jon Caramanica’s list. They’ve been praised by Crack Magazine, Noisey, Pitchfork, Stereogum, and Rolling Stone. Interview called 1000 gecs “a blueprint for what pop music might sound like in the year 2050.” After their world tour was postponed in the summer of 2020, Brady and Les returned with 1000 gecs and The Tree of Clues, a rework of the original album featuring collaborations from A.G. Cook, Fall Out Boy, Charlie XCX, Rico Nasty, as well as crowdsourced contributions by fans. The transformative release was described by NME as a “brain-melting, genre-crushing vision of pop’s future.” In April 2020, the band built an online festival inside the video game Minecraft that quickly broke capacity. Through their bold and adventurous recorded music collaborations and live performances, 100 gecs have been instrumental in transforming the sound of modern pop.

To RSVP for the October 23rd event, please click the RSVP link below. Future public events in 100 gecs’ residency will be announced at a later date. Red Bull is supporting and helping to facilitate 100 gecs' residency at NYU.