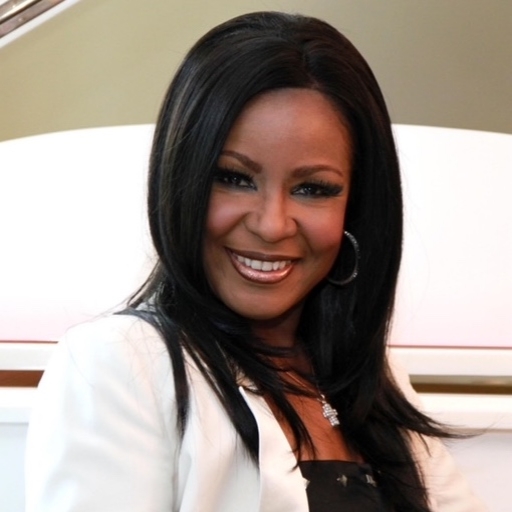 St. Louis  born , producer, songwriter, recording artist and extraordinary singer/entertainer, A’ngela Winbush has consistently shown her ability to break new ground for women musically, vocally and  artistically. To date she has sold over 10 million albums & singles. And more importantly, she is also a Stage III Ovarian Cancer Survivor and recipient of the 2007 Survivor Eagle Award/Pres. Bill Clinton; that will let you know her motto is “I’m living out loud, walking tall and proud by God’s grace”.  She’s one of only a few women that had chart topping success and critical acclaim producing and writing music on multiple artists and herself.  Classics #1 hits such as “I’ll Be Good”, “Your Smile”, You Don’t Have To Cry”, “I Love You More/Dough” ( also in the Biggie Smalls album “Life After Death and the movie),just to name a few for her duo Rene & A’ngela; and  further standout #1’s on her solo albums such as “Angel”,” Hello Beloved” duet w/Ron Isley,, and “Lay Your Troubles Down”.   She has written for and produced such artists as Stephanie Mills, “I’ve Learned To Respect the Power of Love”, “My First Love” on Avant & KeKi, Gold & Platinum on Janet Jackson “Young Love”, Sheena Easton, LaLah Hathaway “Baby Don’t Cry”, including 5 multi platinum albums on the Isley Brothers and Ron Isley, on Keith Sweat, and the opening song for the Ice Cube movies “Fridays”and featured on Rod Stewart’s albums.  A’ngela’s music has also been sampled by the likes of JayZ, Foxy Brown,   P-Diddy, Lil’ Kim and excerpts of her music are found in Erika Badu to Anthony Hamilton to current Hip- Hop , R&B and Pop artists, too numerous to name. She also owns and manages her publishing.

Winbush is a graduate of Howard University in Washington D.C. with a BME (Bachelor of Music Education) and Dean’s Honor Roll Magna Cum Laude certificates, after having studied and also majored in Architecture and City Planning at Howard and Maryville University. Having honed her musical skills (playing piano, writing,) in her St. Louis church and community choirs, and coming from a family with extensive Christian ministerial and Bishopric credentials, she continued on that path at Howard. She sang  in church and travelled (with now Grammy & Stellar Award winner, Richard Smallwood Singers and Union Temple Young Adult Choir) and professionally earned money to pay for books and education singing professionally. Her trio singing group, “Hot Tea” won all the talent shows and was frequently featured, 1st opening for Al Jarreau, and then other popular artists. While working on her Masters, and awaiting her undergraduate May 1977 graduation ceremony, her solo demo tape had landed in the hands of NY radio man Gary Byrd which led to Stevie Wonder hiring and moving her right after graduation, to Hollywood to start a career with Wonderlove as a backup singer, writer and talent; Stevie and A’ngela are over 30 year friends still.

While working for Stevie from 1977 to 1980, she wrote and /sung with the likes of Bob Dylan, Jeffrey Osborne, Jermaine Jackson, Rufus & Chaka Chan, Dolly Parton, co –produced and single handedly written 1978 hit “I’ve Learned To Respect the Power of Love” on Alton McClain and Destiny (later produced & re-recorded on Mills) and songs on the Tower of Power’s Lenny Williams. In 1980 Winbush met Rene Moore while she was still in Wonderlove and formed a duo , Rene and A’ngela. From that came a successful combination of music and recording contracts with Capitol Records first – hits “I Love You More”, “Imaginary Playmates”(Wall to Wall album) and “My First Love”( the “RISE” album), then a 4 song  production on Janet Jackson’s first Gold Album entitled “Janet Jackson”, which eventually went Platinum. In 1985 the duo signed with what is now Island/ Def Jam(Polygram)  their one and only label debut was “Street Called Desire”, which went Gold first, then Platinum, yielding two #1’s “Save Your Love for #1, w/ Kurtis Blow, and “Your Smile”  and 2 -#2’s  “I’ll Be Good” and “You Don’t Have To Cry” R&B and Pop singles internationally. After worldwide touring and a turbulent business association with Moore, Winbush emerged as a solo and Grammy Artist nominee.

By 1986, Winbush’s producing and writing abilities led to being approached by Warner Records, after the death of O’Kelly Isley, to meet and produce Ron Isley. Her first kick out of the gate was a penned and  produced  1987 Gold/Platinum album on the Isley Brothers featuring Ron Isley, entitled “Smooth Sailin” and a number 1 single. After which her own label got on board for her to do a solo recording which spawned the  number 1’s and popular singles and label debuts “Angel”, “Hello Beloved,” “You Had A Good Girl” “Run To Me” on her Grammy Nominated” Sharp” album/ CD.  Her videos from that album are currently popular and regularly seen on “You Tube” along with excerpts of her current performances from  08 and 09 tour dates. From this body of work, she continued to produce and write the bulk of  Isley’s Platinum albums and oversee the behind the scenes business on works such as, “Spend The Night”, “Mission To Please” embodying writing with R. Kelly, right up to creating with R. Kelly the Mr. Biggs musical persona, to the 2002 release of Grammy winning “Contagious”. Also during this time, Winbush did extensive writing and production on MCA/Universal artists, such as Stephanie Mills (Gold album and single “Something In The Way You Make Me Feel”, ) owning and running her Golden Lady Studios & Offices, and production company also on (MCA/Universal Records) . Somewhere in her seven years of association, Winbush and Isley married in 1993, and Winbush put out three more CD’s. Winbush and Isley met Steve Harvey and signed him to the new T-Neck/ Polygram where she co-produced the studio and live comedy album on him and a solo album on their newest artist, Kelly Price.

Winbush was married to Ronald Isley (Nana to 9 Grandchildren and SMom to 3 Daughters and 3 Son-in Laws). In 2003, a series of things transpired starting with A’ngela’s cancer diagnosis. Coming back strong as ever though, since her recovery in 2005 and through her faith, she has overcome numerous personal challenges in health and life. Her live shows and concerts are year round in the US & overseas featured as special guest with artists such as Frankie Beverly, Keith Sweat, Jeffrey Osborne, Dru Hill, and Cameo, to name a few. There are numerous Guest radio and TV appearances and one of the lead actresses in “Church Girl” (as seen on BET & TV One).  Watch her UNSUNG segments or her speaking engagements on life and Cancer awareness & prevention. She is an Elder, an ordained minister in the Pentecostal Assemblies of the World, holds a certificate in Christian Counseling and is close to completion of her Masters in Divinity with a focus in Counseling; She is a member and a recipient of the National Urban League Legend Award and works in her community. The desire is to have her own radio and/or Podcast show so that she can inspire, educate and empower those she touches to make a difference in the lives of our youth.  The new book and music CD are to be released soon.