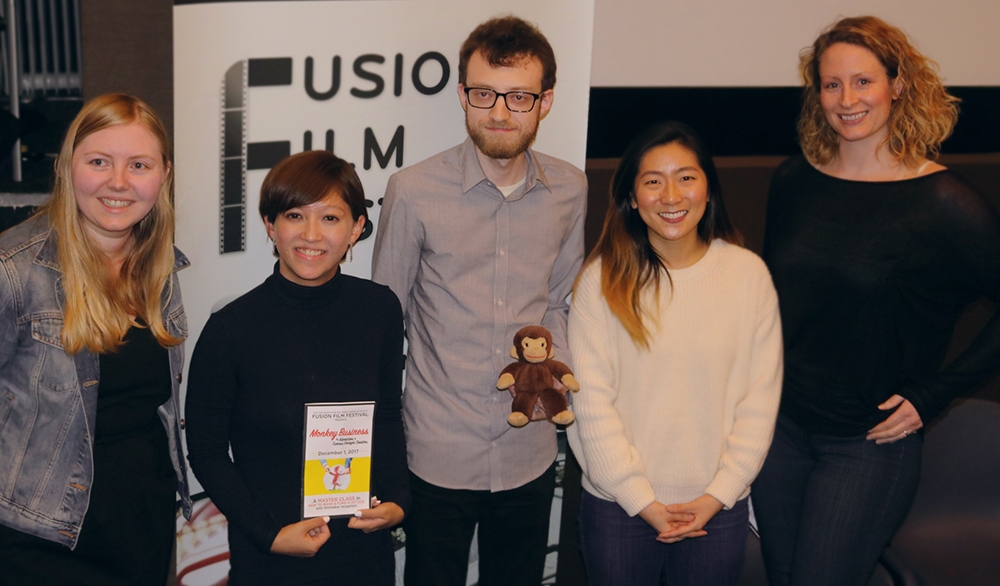 An eager audience of students, faculty and industry guests packed Tisch’s Theatre 006 on December 1 for the Fusion Film Festival’s presentation of a Master Class with the alumni team behind MONKEY BUSINESS: The Adventures of Curious George’s Creators, an award-winning feature documentary.

The film premiered at the LA Film Festival, won the Audience Award at the Nantucket Film Festival, and screened at the Rooftop Film Festival. The film is being distributed by The Orchard (Cartel Land, Life Animated) and is currently available on demand and online in over 60 countries. In addition, Millenium Films just announced it is developing a narrative feature based on director Ema Ryan Yamazki’s film with Ema producing and consulting.

Evident throughout the presentation which included in-process footage, was the powerful bonds formed by these Tisch alumni that carried them through the full process of realizing this dream, a thrilling Tisch success story. At the reception following the presentation, the artists offered their thoughts on returning to Tisch for this event.

Ema Ryan Yamazaki (Director/Producer/Editor) “Being invited back to my Alma Mater to share the journey of making my first feature film was truly a special experience. I hope it was useful for students to see a real-life scenario where the skills, friendships, and networks that were created at Tisch directly help us to get the film made. For me, organizing this Master Class was an opportunity to look back at the whirlwind of the three years it took to get the project done. It reminded me that MONKEY BUSINESS was once just an idea. The biggest take away from the project, and what I hope will stick with the students, is that if I had waited to begin the project until I had figured out how to get it done, I still will not have even started. It took courage, determination, and collaborators who believed in the project as much as I did. Thank you to Susan Sandler and the Fusion Film Festival for providing this wonderful opportunity, which enabled us to take a moment to pat ourselves on the back for the journey we have traveled, and has given us renewed motivation to continue boldly moving forward with our careers.”

Janice Rim Background/Storyboard Artist (Tisch Undergrad Film 2012) “I appreciated this opportunity to reflect on our filmmaking journey and share our thought process and artistic techniques in detail. It was exciting to come back and share what we have accomplished, and I hope in some way we were able to pay it forward and inspire current students.”

Emily Harrold Producer/Archivist (Tisch Undergrad Film 2012), “Walking down the hallways of Tisch that have changed, and yet are still familiar was heartwarming. Tisch and Fusion are both home for me, and so it was great to come home and share my experiences as a filmmaker.”

Annie Bush (Co-Producer/Kickstarter Campaign Manager) "I've never witnessed such a packed room full of eager filmmakers, mostly young women, thanks to the work of Fusion Film Festival. Taking time on a Friday night to go to a Master Class? I'm definitely excited for the future projects coming from these students."