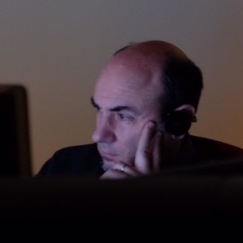 Doug Vitarelli is an animator who has been working in NYC for over a decade. Primarily a 3D artist, he specializes in animation, design and directing for commercials, TV spots and long format but has also created animations for film, Times Square displays, arena shows, children's books and the Hayden Planetarium. He has even spearheaded the development of two independent animation studios.

His work has screened locally, from a pizza joint in Manhattan's East Village to the Museum of Modern Art, and internationally and has won numerous awards, including the Annecy International Animated Film Festival and an Emmy.