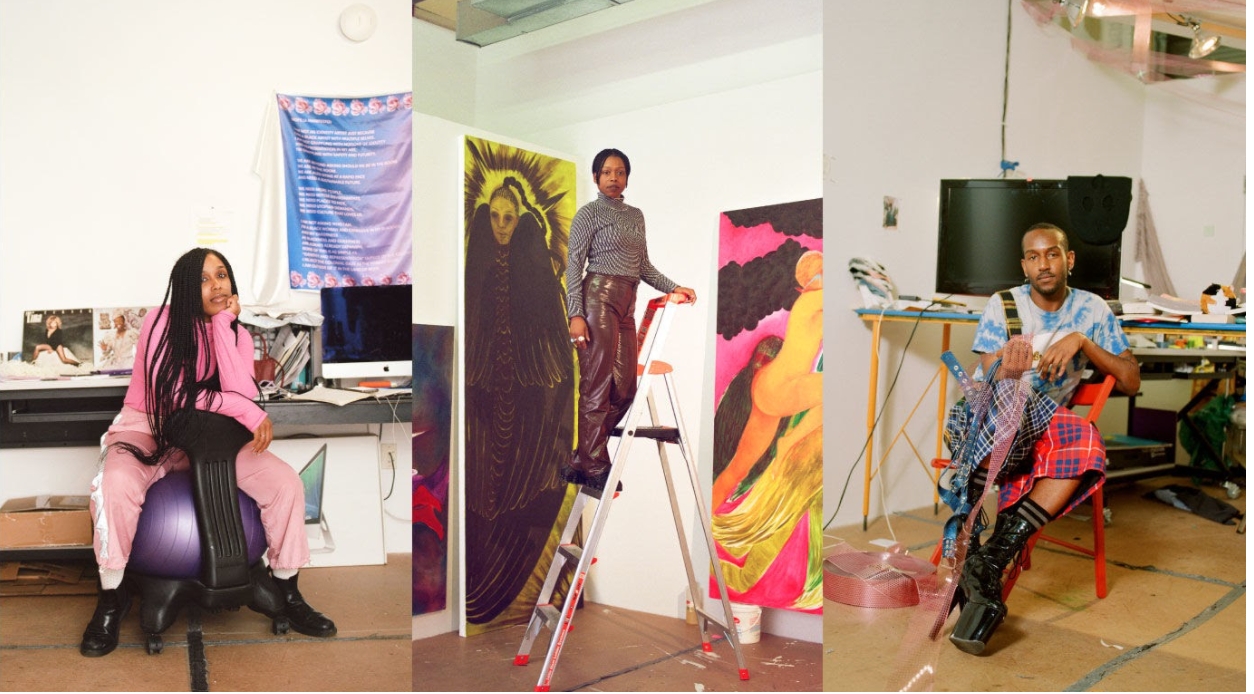 This Longing Vessel was a part of the Studio Museum in Harlem 2019–20 Artists in Residence exhibition featuring work from artists E. Jane, Naudline Pierre, and Elliot Reed.

E. Jane is a Brooklyn based interdisciplinary artist and musician whose work explores safety and futurity as it relates to Black femmes, as well as how Black femmes navigate/negotiate space in popular culture and networked media. In 2015, E. created a performance persona, MHYSA, who is an underground pop star for cyber resistance. Since then, MHYSA has been a staple in E.’s work and MHYSA released an album  February 2020 titled NEVAEH. MHYSA is featured in This Longing Vessel as E.’s way of exploring the black femme diva.

Naudline Pierre is a visual artist who paints an alternate universe of characters that tenderly interact with one another. Through the use of tertiary and analogous color palettes, Pierre’s figures are shown clutching each other in loving embraces. Pierre’s work has been included in exhibitions at the Museum of Contemporary Art, Chicago; The Armory Show, New York; Shulamit Nazarian, Los Angeles; Perrotin, Seoul; Stephen Friedman Gallery, London and Nicodim Gallery, Bucharest among others. Several of Pierre’s pieces are showcased in This Longing Vessel.

Elliot Reed is a director and performance artist who creates solos, ensemble performances, and video centering the live subject. Reed’s work explores the relationship between the performers and the audience as they move through the exhibition space. For This Longing Vessel, Reed turned the limitations from pandemic precautions into aesthetic choices, using cameras to capture the negotiations of the body the musicians had to make in order to perform together in one space. These negotiations are put on display in This Longing Vessel through five panels in the exhibit that highlight each performer’s experience.

This Longing Vessel was originally scheduled to debut in May 2020, but was delayed due to the pandemic until December 2020.

Elliot Reed started off the discussion by explaining how COVID limitations were folded into the aesthetic choices made for the piece. Reed mentioned that filming performances required different cameras in different corners of the room to ensure distancing, and how that affected the editing to create a cohesive end result. E. Jane adds that the performances had to be altered because of the lack of a live audience —  for instance, they mentioned using mirrors to create the black femme self as the audience of the performance.

Tim Reid starts off by asking the artists how their work is situated in relation to performance. Elliot Reed tells us that all of three artists work with the figure in some way- bending the form, using flesh, personhood, body, space, and time as a link between their work. E. Jane uses self-portraiture and sculpture, while also drawing from an archive of 90s music videos, to articulate agency and control from the persona of the black diva. Naudline speaks about world building, allowing the figure to take up space and experiences outside of herself. Naudline describes creating work in relation to watching a movie- you don’t know how it's going to end, but there has to be space for the work to stretch and grow.

NYU Professor Malik Gaines asks questions about the art historical and the performance studies themes underlying each piece. Why did all 3 artists cancel the white wall in their performances, and how did color affect those decisions? Naudline points out that cancelling the white wall is a way of rebellion. It allows people to experience the work on the artist’s terms. From the lavender hues in E’s work, to painting the wall the color of Elliot’s flesh, the canvas as a performance of its own sets the stage for the artwork that is placed on top of it.

Professor Brittnay L. Proctor questions the meaning of the title, The Longing Vessel, as a through-line connecting all three artist’s work. Naudline talks about the notion of holding space, being held, and being filled. E. Jane furthers this idea by telling us about her persona, MHYSA, as a channel, and her body as the vessel. In different ways, all three have found meaning the vessel as a space for black art and performance.

Lastly, Professor Tavia Nyong'o describes the exhibit as a welcoming place for people of color. He interrogates the ways in which the work withholds from the audience and asks them to meet the artist’s halfway. It is an invitation to imagine a more vulnerable and human relationship to the art making on both sides of the canvas, he says. This makes the exhibit a sacralized space, to have something other than a white wall show.

The Longing Vessel exhibit closed on March 14th, 2021, but the underlying motifs of holding space remain at the front of our minds. Thank you all for participating in our Performance Studies event and sharing your work with us!

Elliot Reed has a new show titled THREE WORKS  opening on March 25th at the OCDChinatown until April 25th.

Naudline Pierre’s work  will be featured at Prospect.5 New Orleans and in a forthcoming solo exhibition at the Dallas Museum of Art. 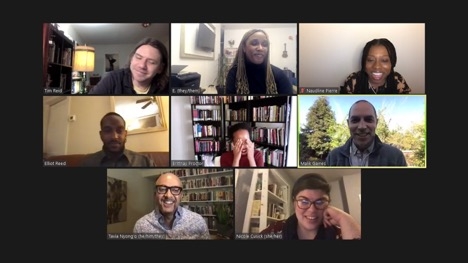