Outside the Iris & B. Gerald Cantor Film Center in New York City, warm spring weather greeted a long line of audience members, who gathered for the annual Fusion Film Festival competition screening. Currently in its 17th year, Fusion is New York University’s premier student-run festival dedicated to celebrating women in film, television, and new media. The screening wrapped up a whirlwind schedule of events, all of which featured conversations with accomplished women filmmakers and visionaries. 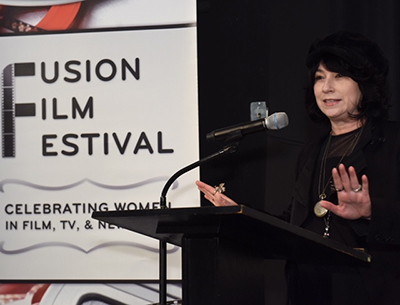 Just 24 hours prior, the festival kicked off with a highly-anticipated masterclass with Fusion’s Woman of the Year, television writer, director, and producer, Amy Sherman-Palladino. Sherman-Palladino, who is in the midst of filming the third season of her hit show for Amazon, The Marvelous Mrs. Maisel, exhibited a refreshing candor about her experience in the industry. In true comedic form, the Emmy-winning showrunner had the audience in stitches as she bluntly admitted, “I got where I am because I simply don’t listen to anybody.” While discussing the push-and-pull of insecurity and individuality, Sherman-Palladino advised, “You simply cannot be afraid to be fired, because fear is the most paralyzing thing in this industry, and it’s the reason everything bad happens.” In spite of the difficulty of navigating a field so heavily dominated by men, she was adamant about her love for TV and the importance of being passionate. “The minute you veer from what makes you excited is the minute it’s all over. Creativity is a living, breathing creature. It’s always shifting and you always have to be able to move with it. But you have to stick true to the one thing you saw originally.”

Just blocks away, visual artist Shirin Neshat led a Visionary Masterclass, where she discussed how her background shapes her work. “At first, I was terrified,” she shared, regarding her venture into the film medium. “I have no education in cinema. I was known as an artist for my calligraphy and then I was known as a video artist, and I wanted to take a break.” But the risk paid off, as Neshat was awarded the Silver Lion for Best Director at the Venice Film Festival following her directorial debut with Women Without Men. In addition to being a multidisciplinary artist, Neshat is also Iranian-born, but NYC-based. Having been in and out of Iran and America for the past 40+ years, she reflected on how her upbringing and experiences have shaped her work. “I’ve decided I’m not going to make any more films about Iran, but my stories will always be from an Iranian perspective.”

The final day of the festival offered preview screening of the soon to be released Neon feature, Little Woods, a modern western  by writer/director and NYU Tisch alumna Nia DaCosta, followed by a Q&A with producers Rachael Fung and Gabrielle Nadig, who shared insight into their collaborative experience. As NYU Tisch Film & TV alums, Fung and Nadig also encouraged student filmmakers to utilize the resources around them. “Through your connections at NYU, you can find mentors at different levels. We want everyone to rise up.” Fung also emphasized a crucial point for women who may feel intimidated by the industry: “If you don’t go out and make your own dreams happen, someone will keep paying you to make theirs happen.”

Filmmaker and actor Josephine Decker pulled from her own directorial experiences to lead an invigorating movement workshop for a limited group of festival-goers. Before easing the group into a breathing exercise that incorporated vocal vibrations, Decker explained how her fascination with experimental theater helped her shape the story in her third feature, Madeline’s Madeline. Allowing movement-based improv and mindful reflection to build the relationships between not just the characters, but the actors themselves, deepened the themes they were exploring within the story. Decker also revealed how those exercises helped her just last summer in directing her fourth feature, Shirley, a psychological drama starring Elizabeth Moss as famed author Shirley Jackson.  The dialogue was much denser in this film than in any of Decker’s previous work—however, when she brought in the movement techniques, she discovered new possibilities in using blocking as a vessel for storytelling.

The final screening and awards ceremony provided the perfect conclusion to the festival, as students, alumni, professors, artists, and friends congregated to watch and recognize the work of numerous women-identifying student writers and filmmakers. Fueled by a need for more celebratory spaces created by and for women, Fusion once again proved itself to be a vital pillar to the community, not just at NYU, but in the entertainment community at large. Its free programming provides access to some of the most exciting voices in film, TV, and art, inviting women from all backgrounds to draw inspiration and empowerment from each other.

In the closing moments of her Masterclass, Sherman-Palladino offered to the audience, “When you don’t know that something isn’t possible, it just kind of makes it possible.” Fusion Film Festival captures that sense of possibility, committing itself to reshaping and transforming the industry into a more equitable, inclusive, and ultimately liberating playing field.