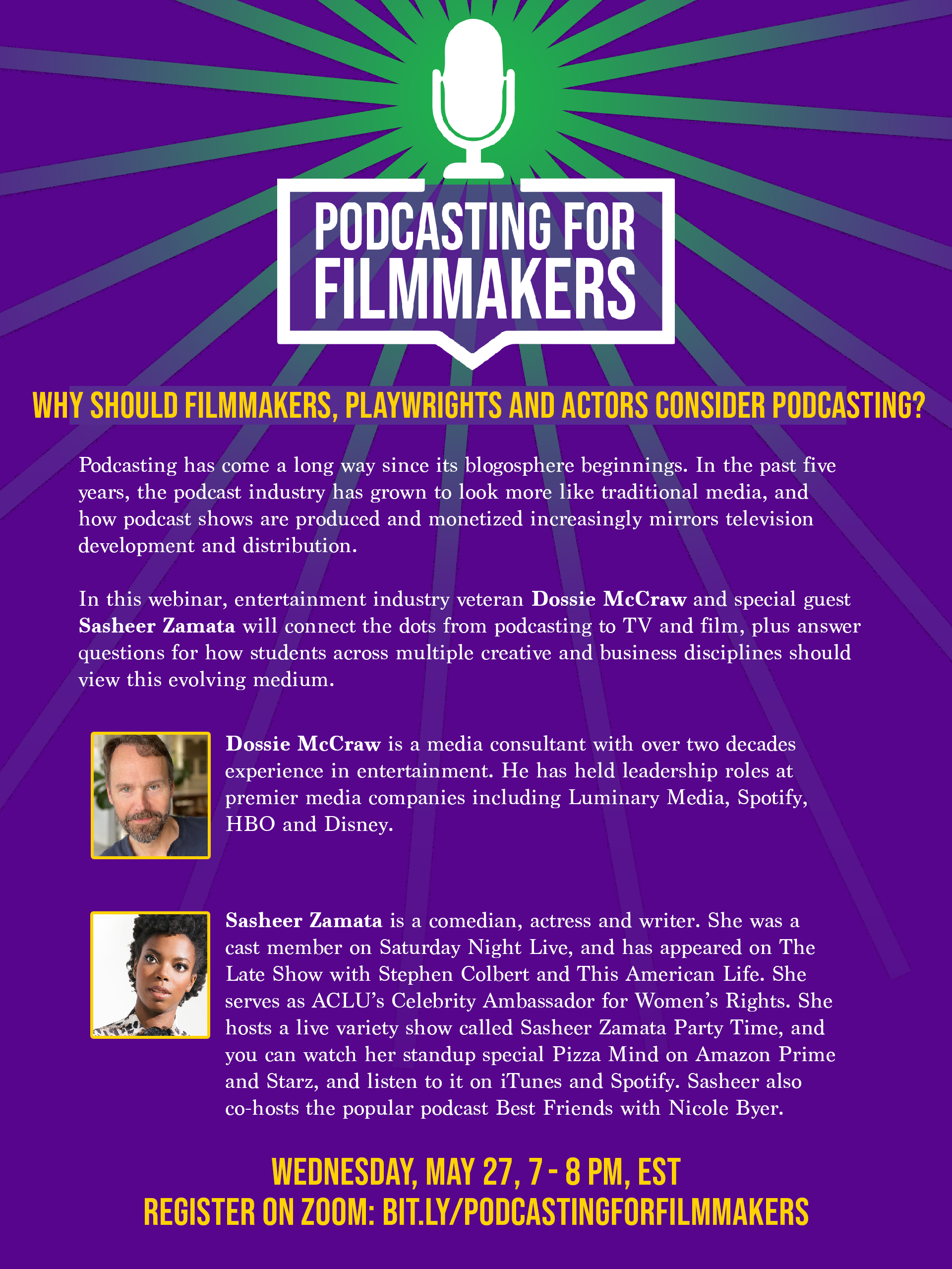 Why should filmmakers, playwrights and actors consider podcasting?

Podcasting has come a long way since its blogosphere beginnings. More than 100 million Americans now listen to podcasts monthly, a number which has more than doubled over the past five years, according to data from Edison Research. In that same time frame, the professionalized podcast industry has grown to look more like traditional media. How podcast shows are produced and monetized increasingly mirrors television development and distribution. What’s more, many podcast properties have already been made into films or television series, and vice versa.

In this webinar, entertainment industry veteran Dossie McCraw and special guest Sasheer Zamata will connect the dots from podcasting to TV and film, plus answer questions for how students across multiple creative and business disciplines should view this evolving medium.

Dossie McCraw is a media consultant who today primarily works with film & TV producers transitioning into audio show development (aka podcasts), advises startup technology companies on content strategy, and helps performing arts centers pivot to more digital programming to offset the impact on live events due to the global pandemic.

Dossie has over two decades experience in entertainment. He was most recently the Senior Vice President of Programming at Luminary Media, where he was tasked with launching the content strategy and building the programming team for a global audio subscription streaming service dubbed “the HBO of podcasting.” Previously, he was Global Head of Content Partnerships at Spotify from 2013 through 2018 where he led an international team that transitioned the previously music-only streaming platform into a multi-media company, beginning with the launch of video and podcasts on Spotify in 2015. From 2001 to 2013, Dossie was Director of Program Planning and Audience Research at HBO.

Sasheer Zamata is a comedian, actress and writer. She was a cast member on Saturday Night Live, and has appeared on The Late Show with Stephen Colbert and This American Life. She serves as ACLU’s Celebrity Ambassador for Women’s Rights. She hosts a live variety show called Sasheer Zamata Party Time, and you can watch her standup special Pizza Mind on Amazon Prime and Starz, and listen to it on iTunes and Spotify.

She’s been listed in Time Out New York’s Top 10 Funniest Women in NYC, Brooklyn Magazine’s 50 Funniest People in Brooklyn, and Complex Magazine’s Women in Comedy You Should Be Paying Attention to Right Now.

She co-created and co-starred in the webseries Pursuit of Sexiness, which was named one of the Top 10 Web Series of 2013 by Variety, and part of Glamour’s 7 Web Series We Can’t Stop Watching in 2015. Sasheer also co-hosts the popular podcast Best Friends with Nicole Byer.