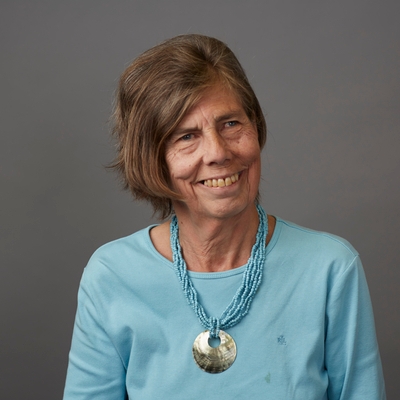 Producer/director Lynne McVeigh is an associate professor of television, sound, and children’s media and Executive Director of Craft Studies at the Kanbar Institute of Film and Television, Undergraduate Department at the Tisch School of the Arts, New York University. In 1994, she won the David Payne Carter Award, Tisch School of the Arts most prestigious teaching honor. Professor McVeigh teaches courses in basic sound production, television studio production and children’s media. As co-director of The Fearless Theater Company, which is made up of young people with and without disabilities, she has created with the members theater, television, and radio programs. She has also involved The Fearless Theater Company with NYU programs, staff and students, creating a temporary home for the troupe and making possible the radio series, Satchmo’s Gang on WNYU-FM. In 2002 she produced and directed, History Makers, for The Fearless Theater Company. This twenty-eight minute video was created with students in workshops at two high schools next to World Trade Center site and presents their thoughts and ideas on the aftermath of 9/11. Writer, producer, and director of children’s plays, as well as instructional and documentary programs for television and radio, Professor McVeigh’s credits include: Paths of Rebellion, an award winning PBS series on the American Revolution, Ivy, a film on the American university, Dawdles the Duck, a special feature on children’s radio series, Radio Recess, Court Trials in American History, 11 radio programs for public radio, Music of the Cinema, radio series for National Public Radio, and Personal Moments, a radio series on sex education as well as educational consultant for Noggin’s web series, Radio Noggin. Most recently, she has collaborated with Drs. Carol Tosone andDr. Caroline Rosenthal Gilman, formerly of New York University's Silver School of Social and now at Hunter School of Social Work, to produce five training videos for Social Work Students, which are being nationally distributed by the Center for Social Work Education. Professor McVeigh is on the board of Children’s Media Association and the New York International Children’s Film Festival.