A Night with RADA

"If you go one step into Shakespeare with an open heart and mind, it goes two steps into your life." - Geoff Bullen

Tisch alumna Sarah Sumner and senior Richard Barnes joined Geoff Bullen, course supervisor of Shakespeare in Performance and emeritus director of actor training at the Royal Acadamy of Dramatic Art (RADA) and program director Mary Jane Walsh Monday night, in a conversation about the practical training and companion courses in the Shakespeare in Performance program at RADA.

Prospective students asked questions about the semester-long program, which is offered each fall and spring to sophomores, juniors and seniors. During the 14 weeks, students study the art of Elizabethan and Jacobean performance through the presentation of sonnets, song, dance, armed combat, and clowning. 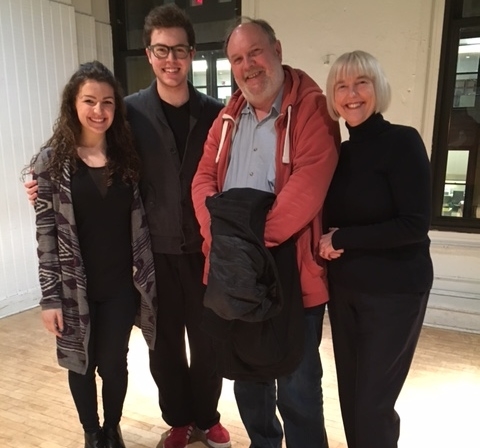 Sarah and Richard, both from the fall 2015 semester, described how their time at RADA increased the trust in their instincts. "[The program] has given me more confidence as an actor," Sarah said.

"There is a freshness, willingness, openness [for students] to put themselves on the line," Geoff said about the Performance in Shakespeare course.

The course not only allows students to immerse themselves in the text; they also get to experience the historical context of Shakespeare first-hand as they live and study in the Bloomsbury district, steps away from London's Senate House and The British Museum, and a short bike ride across the Thames to the Globe Theatre.

While the program is highly demanding, there are also opportunities to explore London itself. "Our program is very intensive - class five days a week. But there is time for a social life," said Mary Jane Walsh. Richard described the affordability and accessibility of theatre and he was able to attend approximately 14 shows for roughly £10 each. "There are definitely ways to immerse yourself in London culture," said Sarah.

Both Sarah and Richard discussed how their time at RADA has affected their plans for the future. Sarah, looking to act with a Shakespeare company, was able to submit work from RADA digitally to audition for a company in Los Angeles. "I'm flying out for a callback later this week," she said.

Richard, currently performing in the Adler production of Arabian Nights, reiterated the confidence he discovered through the program. "It's made me more of an aggressive and fearless actor. I feel stronger."

The fall 2016 application for RADA is now closed. Applications for the spring 2017 semester will open in July. Please check our admissions page for more information.