All About Acting: October Events Wrap-Up

On Monday, October 1, we held an information session about Shakespeare in Performance at the Royal Academy of Dramatic Art (RADA) in London. Geoff Bullen, Director of Short Courses at RADA, along with spring 2018 alumni Lucas Friedman and Eleanor Bailey were the guest speakers. Geoff spoke about the actor training the students receive when they study abroad in London and Lucas and Eleanor shared their experiences in the program. 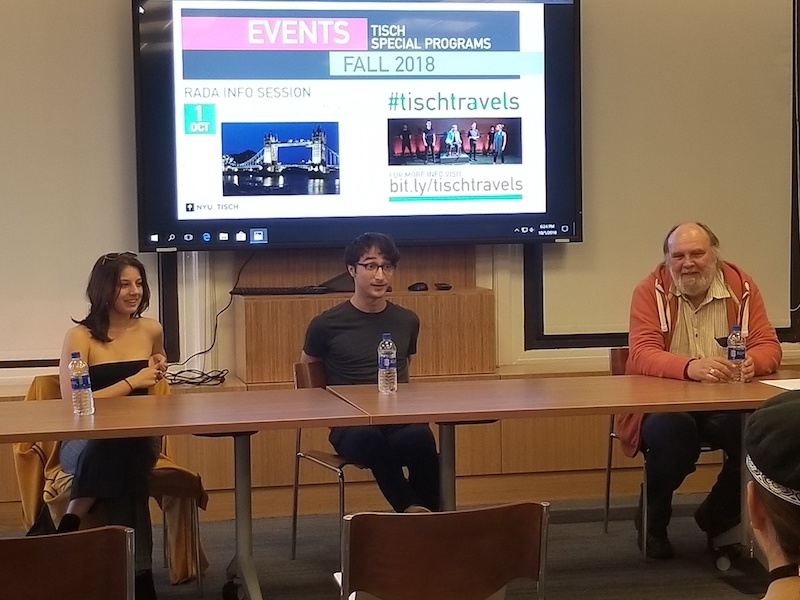 Eleanor and Lucas talked about what surprised them about the program. Lucas said that turning Shakespeare’s sonnets into performance pieces was one thing that stood out. “It was so rich [and] tremendously difficult to tackle as an actor a piece that was never intended for performance as far as we know,” he said. “Connecting with the poetry was so lovely and so thrilling and now I find myself going back to poetry a lot.”

Eleanor said one thing that surprised her was “just the time it took in crafting some things. I mean, we’d do verse with Geoff figuring out how to break the verse down technically was surprisingly difficult, but rewarding in the end.” 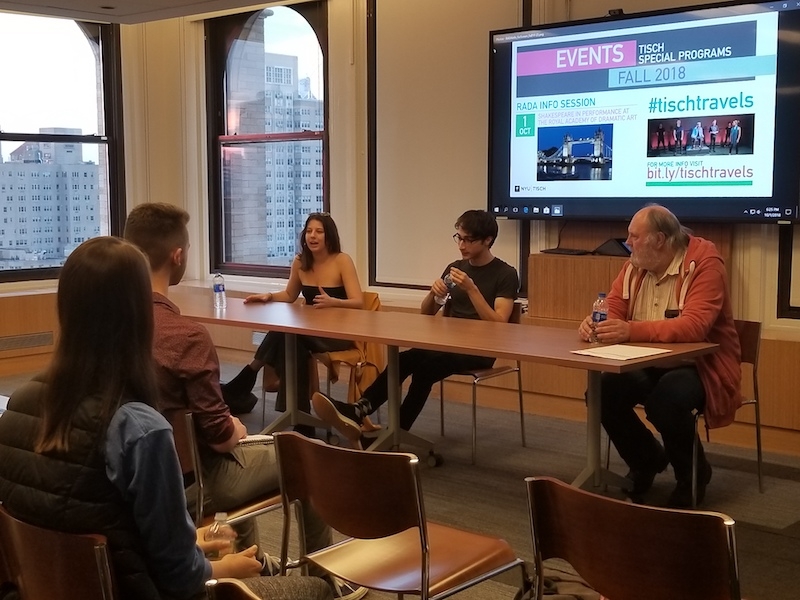 The RADA alumni also highlighted the stage combat training in which all RADA participants have the opportunity to take a certification exam in stage combat. If the actors pass, they receive a  three-year certification from the British Academy of Stage and Screen Combat.

“You get to run around like you’re on Game of Thrones or something,” Eleanor said, describing the broadsword training. “It’s good exercise,” Lucas added. “It’s a great way to vent some aggression and it looks nice on a résumé.”

Prospective RADA students at the info session were curious about how RADA keeps track of each student's progress. “As you walk through the program, you meet with your teachers and they give you individual feedback,” Eleanor said. “Since the classes are so small, you do feel very seen. You’re building up a relationship with every teacher that you’re working with, and then on top of that, you’ll have these individual meetings several times a semester where you’ll get a chance to work on specific points.”

Lucas said, “There’s a very real sense of progression and a sense that the things you’re doing, that note is being taken and people are checking in with you at more or less regular intervals, so you do have that very strong sense of, ‘Oh, I’m building on something with these teachers, with their support, with their insight.’” 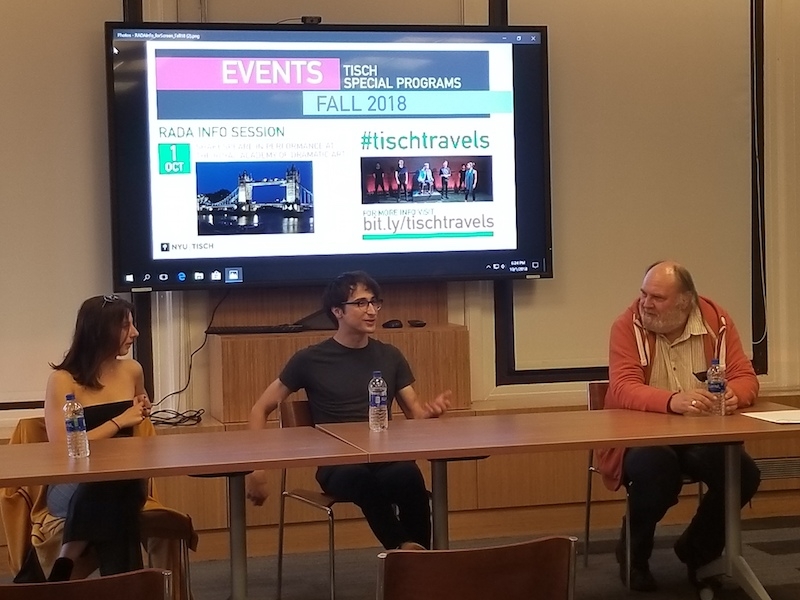 “The staff are pretty stringent on what they say about you, but it’s kind,” Geoff added. “There isn’t that sort of haughty intolerance [about the students].”

“I don’t think there was any point in these meetings in where I felt talked down to or picked apart. It was always very much a conversation trying to identify what you saw as your strengths and weaknesses, what they were seeing, and build a path forward,” said Lucas.

On Tuesday, October 16, we held an information session and workshop on the summer study abroad program Commedia dell’Arte in Florence. This program is an exploration of the “seriousness of comedy” through improv, mask work, singing, and other Commedia dell’Arte traditions. Jim Calder, head of Movement at Tisch in Graduate Acting and Jacob Olesen, who teaches Commedia dell’Arte in Florence with Jim, led the information session, along with Giselle Vazquez and summer 2018 alumnae Nina Andjelic, Susan Dorf, Huxley Garrett, Jessica Kantorowitz, and Kristina Paul.

The alumnae took questions from the session attendees. “How has this training opened you up as an actor?” one student asked. Jessica Kantorowitz said that she had to stop trying to do things the “right” way and learn that there’s “no right way to do it.”

“Actors by nature want to find what the ‘right’ thing is,” Jim said. Breaking the actors of the habit of searching for the right method and teaching them to “just do it” is one of the goals of the training.

Susan Dorf described the training as “mentally very freeing. When you’re fully committed, there’s no fear, no shame, and you can fully fall into it.”

Jacob talked about the importance of being available for whatever situation comes up. Being prepared in the moment “to act, to answer, to play, etc. is very pure. [As actors], we’re searching for this purity.”

For Nina Andjelic, who almost didn’t attend the program, training in Florence renewed her love of acting. “New York reminds me of the business of acting, and being away from the industry and just acting allowed me to fall back in love with it.”

About the training, Giselle said it teaches rigor. “You’re abroad but in a program with Jacob and Jim and are stretched in the best way. They’re pushing you to the thing you think you can’t do, which allows you to get to know different parts of yourself and to trust yourself and your instincts.”

Aside from training, students get to experience the beauty of Italy in so many ways. They live at the villa La Pietra, described by Giselle as “the Versailles of Florence.” They also have opportunities to travel on the weekends, visiting nearby locations like Venice, Pisa, Cinque Terre, Rome, and Capri. This year, the entire class also went on a group trip to Pompeii and Naples.

The evening concluded with a workshop where Jim and Jacob taught a series of exercises in physical movement, interacting with other actors, improvisation, and play, touching upon the training in the Florence program.

Jacob Oleson and Jim Calder with the workshop attendees.
Photo by Mariangela Lardaro

The application for summer 2019 is open. The early decision deadline for Commedia dell’Arte in Florence is Monday, December 3, 2018. Visit our website for more audition and admissions information.

The fall 2019 application for Shakespeare in Performance at RADA will open in December.

Follow Tisch Special Programs for updates regarding our spring 2019 events, including sessions for Commedia dell’Arte and Shakespeare in Performance at RADA.