MAD CLOT ON A HOLY BONE: A CONVERSATION BETWEEN ASHER HARTMAN AND CHIRON ARMAND 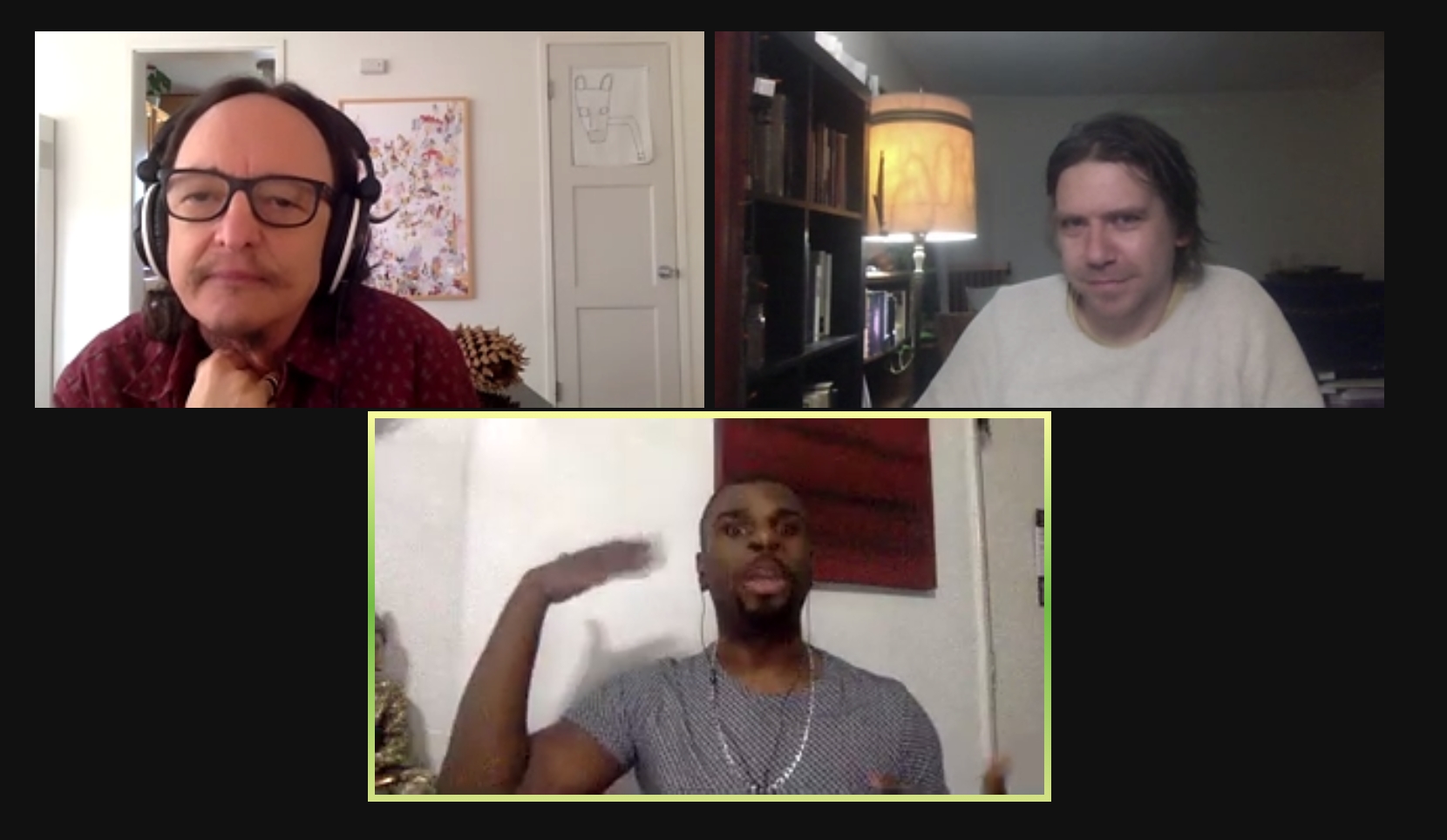 This lecture series event brought Asher Hartman and Chiron Armand in a generative discussion about spirituality in practice. The conversation was grounded in a talk about Asher’s book, Mad Clot on a Holy Bone: Memories of a Psychic Theater. Tim Reid, current Ph.D. candidate, curated and moderated this conversation. Reid also contributed to Hartman’s book.

Chiron Armand is a practicing shaman and PS M.A. alum. Armand recognizes the importance of acknowledging and paying homage to our ancestry and being engaged with spiritual practices. He emphasizes the importance of holding space for the past, while also working past those moments to focus on producing positive experiences in the present.

Asher Hartman uses intuitive practices to connect with other people spiritually and artistically. As a playwright, he works with actors to explore the human psyche and create non-narrative spaces in theatre. He also provides intuitive readings outside of his theatre practice. Both Hartman and Armand engage deeply with personal and visceral experiences within their work.

Mad Clot on a Holy Bone: Memories of a Psychic Theater is a collection containing three of Hartman’s plays: Purple Electric Play (PEP!), Mr. Akita, and Sorry, Atlantis: Eden’s Achin’ Organ Seeks Revenge; contributions by Janet Sarbanes and Lucas Wrench, and a conversation between Hartman, Mark Allen (who produced the three featured plays in collaboration with Machine Project), and Tim Reid. Hartman’s work is driven by sex and sexuality, as sex helps to understand the depths of the psyche. Things (ideas, feelings, desires) that might not usually come up, can come up during sex, when the mind is the most free to fantasize and wonder. According to Hartman, theatre is a bedroom where these things can be seen (Hartman is aware, however, that sometimes in theatre you have to show people what they want instead of who they are, because not everyone is equipped to handle it).

During the conversation, Armand referred to Mad Clot on a Holy Bone as a homecoming. It is a record of Hartman doing transformative theater while navigating ideas around legitimacy in theater, performance art, and other areas. When asked about his writing process for this book, and for his works in general, Hartman stated that if something moves through his body, from the spirit, and it's true, he decides to write it down. His work is a collaboration between him and the spirit. If he writes something down and it vibrates through him, it’s good.

Drawing on human experiences is a key part of theatre, according to Asher Hartman. He begins by focussing on a central issue that affects a member of the GawdAfful National Theatre. Throughout a lengthy process of interviews and intuitive readings, a script is developed. He writes about the actor’s concerns, and works with them psychically and spiritually. The entire process of creating a play takes up to a year, he says. He explores the idea of the non-narrative in theatre, because theatre is a place that can broaden the mind. For Hartman, it isn’t necessary to follow the typical structure of the narrative when the aim is to show people the possibilities that lie outside the story.

As a director, Armand thinks it is important to push actors, giving them roles that unlock doors inside themselves.  He is not interested in his work being right, he is interested in his work being accurate. It is about asking actors to touch something in themselves that they are avoiding touching. Armand adds to this, that it is important to connect with our ancestors, and to acknowledge death, as a lot of our neuroses come from the fear of death. Creating a visceral experience can come from a connection with our earliest selves, our ancestors. Being able to acknowledge the totality of life can truly push us further in our journey forwards.

This event was made possible by the collaboration of the Department of Performance Studies,

Mad Clot on a Holy Bone: Memories of a Psychic Theater is available for purchase through X Artists' Books.