Day of Community Symposium: Queer New York and Urban Performance in the 1970's and 1980's 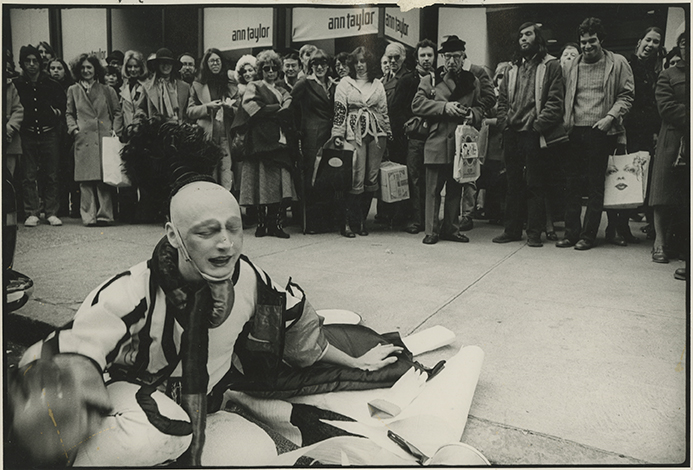 The Department of Performance Studies presents a Day of Community Symposium

Held in conjunction with the exhibition Rubbish and Dreams: The Genderqueer Performance Art of Stephen Varble at the Leslie-Lohman Museum of Gay and Lesbian Art, this one-day symposium will explore queer performance and its relation to New York City’s public spaces in the 1970s and 1980s. Topics range from the street as a contested site of performance art to the urban framework of New York as performing on and for queer communities.

The symposium has been organized by David J. Getsy and Ricardo Montez (M.A. '01, Ph.D. '07) with the Department of Performance Studies and is co-sponsored by the Schools of Public Engagement at the New School, the Leslie-Lohman Museum of Gay and Lesbian Art, and the Graham Foundation for Advanced Studies in the Fine Arts.

*Seating is limited and RSVP IS REQUIRED for entry.*

Speakers include (in alphabetical order):

“The Street as Stage: Stephen Varble and Gender Confrontation in 1970s New York”

David J. Getsy is curator of Rubbish and Dreams: The Genderqueer Performance Art of Stephen Varble for the Leslie-Lohman Museum of Gay and Lesbian Art. His books include Abstract Bodies: Sixties Sculpture in the Expanded Field of Gender (Yale 2015), Scott Burton: Collected Writings on Art and Performance (Soberscove 2012), Rodin: Sex and the Making of Modern Sculpture (Yale 2010), and, most recently, the anthology of artists’ writings, Queer (MIT 2016). He teaches at the School of the Art Institute of Chicago, where he is the Goldabelle McComb Finn Distinguished Professor of Art History and Interim Director of the SAIC Low-Residency MFA Program.

“The Queer Accumulation of Dispossession: Producing Lesbian and Queer Places in the 1980s”

Jack Gieseking is an urban cultural geographer, feminist and queer theorist, and environmental psychologist. He is engaged in research on co-productions of space and identity in digital and material environments. Jack’s work pays special attention to how such productions support or inhibit social, spatial, and economic justice in regard to gender and sexuality. He is working on his second book project, A Queer New York: Geographies of Lesbians, Dykes, and Queers, 1983-2008, which is under contract with NYU Press. Jack is also conducting research on trans people’s use of Tumblr as a site of cultural production. He is Assistant Professor of Geography at the University of Kentucky, where he teaches courses on digital studies and queer geographies. Jack identifies as a woman and uses he/him/his pronouns. Jack can be found at  jgieseking.org or @jgieseking.

Christina B. Hanhardt is an associate professor in the Department of American Studies at the University of Maryland, College Park.  She is the author of Safe Space: Gay Neighborhood History and the Politics of Violence (Duke), which won the 2014 Lambda Literary Award for Best Book in LGBT Studies. Her new project, “Left Out,” engages debates in queer theory and politics to track the history of stigma in left social movements more broadly.

“Writing It Out in New York City: Keith Haring and the Line”

Ricardo Montez is currently an assistant professor of Performance Studies at the New School for Public Engagement where he developed and chaired the curricular programs in Race and Ethnicity and Gender and Sexuality. He recently completed his monograph on the artist Keith Haring titled Keith Haring’s Line: Race and the Performance of Desire.  In 2014, Montez was selected, along with Josh Lubin-Levy, as a curator for the Visual AIDS summer show.  Theexhibition, Ephemera As Evidence, took its title from an essay by the late José Esteban Muñoz and considered the role ephemera plays in the political life of HIV. Montez is currently working on a second book project on the queer hand that examines gesture, manipulation, and the distortion of documentary evidence in the production of queer visual art and performance.

Hentyle Yapp is an assistant professor at New York University in the Department of Art & Public Policy. He is affiliated faculty with the Department of Performance Studies, Disability Council, and Asian/Pacific/American Institute. His research engages China, performance, dance, disability, and queer theory. His articles have appeared or are forthcoming in GLQ, American Quarterly, Journal of Visual Culture, and Verge: Studies in Global Asias. He is also a member of the Social Text collective.