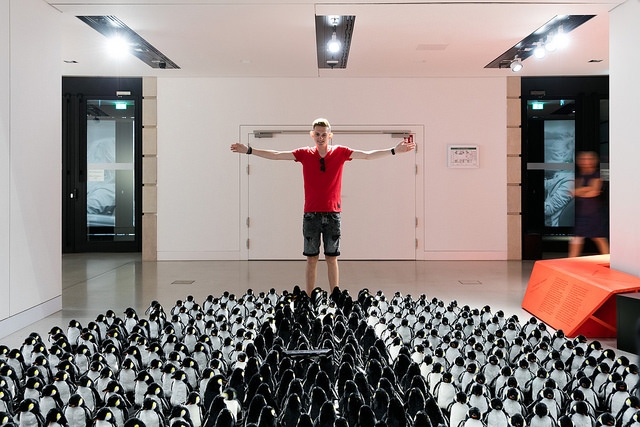 Congratulations to ITP Alum and Professor, Daniel Rozin for his work being shown at Ars Electronica.

Nature—first nature, as it were—has long since ceased to be our life’s sole determinant; now there’s this equally important second nature, the one that we have created ourselves. And our sojourns in this invisible and nevertheless omnipresent realm are becoming increasingly frequent and of longer and longer duration—we shop and book travel there, do our banking, partake of the news, watch films and listen to music, play and communicate with other people. And as we go about these activities, we increasingly come upon programs and machines that are doing exactly the same thing—as commissioned by a human being or some other program. So what impact does it have on our future coexistence when it becomes increasingly unclear whether, at any particular moment, we are interacting with a human being or a computer program? To what extent does this human-machine society that we have wrought influence the way that we learn, work, play, and communicate with each other—in short, how we encounter and come to terms with one another? “Ars Electronica in Berlin” presents an exemplary compilation of artistic takes on new forms of encounter, novel interrelationships and the challenges they entail. The works on exhibit are by Nelo Akamatsu (JPN), Memo Akten (TUR/UK), Exonemo (JPN), Akinoro Goto (JPN), Iris Van Herpen (NL), Cornelia Hesse-Honegger (CH), Shinseungback Kimyonghun (KOR), Christina Kubisch (D), Isaac Monté (BEL), Quadrature (D), Daniel Rozin (ISR/US), Mariano Sardón (ARG), Maja Smerkar (SLO) and Shunji Yamanaka (JPN).

DRIVE is Volkswagen Group’s communications forum in Berlin. This venue located in Lindencorso in the heart of Germany’s capital premiered in 2015 to showcase the diversity of the company’s 12 brands and Volkswagen Financial Services. DRIVE hosts changing exhibitions on vehicle makes and a wide variety of topics connected with mobility. A diverse lineup of ancillary events complements the exhibitions. Brief bios of the participating artists: