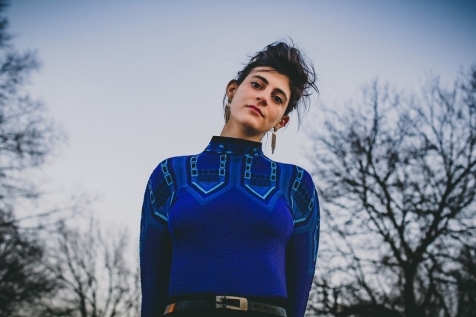 “You don’t often see the job title ScienArtist on LinkedIn, but Gal Nissim uses it, and rightly so. Her academic training in her native Israel was in both biology and art, and her graduate work in the Interactive Telecommunications Program (ITP) at the Tisch School of the Arts helped her to learn how to merge art with science. “When you’re creating something between disciplines, you’re not constrained to one way of thought,” she says. Using sculpture, video, animation, and other mediums, Nissim creates startling art centered on animals and the natural world they inhabit.
And not just any creatures. “I’m drawn to animals we hate,” Nissim says, particularly those whose urban habitats overlap our own: bats, pigeons, raccoons, and rats—especially rats. “Rat Tale,” her ITP thesis, is an immersive installation in which viewers stand beneath a suspended box with a transparent dome through which they can see rats play. “Usually we look at rats from above, and I wanted a new point of view,” she says.
So many of Nissim’s projects were rat-related that “like Jane Goodall, I needed to know my subjects more closely,” she says. Nissim adopted Kahlo and Berry, the two stars of “Rat Tale,” while a grad student, but owing to rats’ short life expectancy, they’ve moved on to the Big Garbage Can in the Sky. “They taught me a lot,” says Nissim. “About rats and ourselves, although it wasn’t always easy. They’re very affectionate, but you need to develop a trust relationship with them.” In crossing the line to engage with creatures we share our world with, usually, she says, “you find that they’re helpful or interesting or intelligent.”