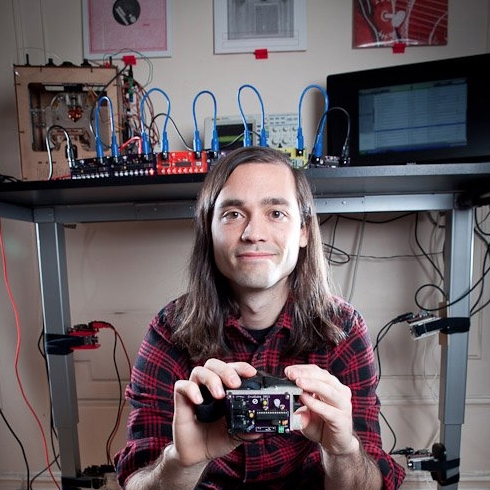 Basic Analog Circuits with Eric Rosenthal. Without the right teacher, even the basics of analog electronics can seem incomprehensible. But Eric was able to convince me of the incredible simplicity underneath it all.  I didn’t always understand the concepts at first, but he left a strong impression that if you keep at it, the simplicity reveals itself, and when it does it’s a beautiful and almost religious thing.  I kept at it, and now that years later I find myself teaching this same material, I try above all else to leave my students with a similar sense of clarity.

For the past year I’ve split my time between teaching at the Music Technology program at NYU Steinhardt, and running Crudlabs, the open-ended music and audio electronics project which started as my ITP thesis project in 2009, and recently turned into an actual small business.

I’ve been teaching digital and analog electronics classes for undergrads at the Music Technology program for 2.5 years now, and it’s turned into an almost full time job.  I love teaching, I’d do it for free if I could.

Late last Summer I launched the first big Crudlabs product for sale - a Mellotron-like instrument based around a hacked cassette Walkman called the Crudman.  Sales and reviews have been good, and they seem to be getting into the right hands.  I’m putting some of the profits into R&D for a new, unrelated project which will be released for sale late this Summer.

If you work on something every day for months or years, you eventually end up with something massive. But if you don’t, someone else will.  Good ideas are important, but the key to both short and long term victory is persistence over an entire lifetime.  There’s no geniuses and visionaries, there’s just people who kept fighting to make their mark on the world after everyone else got tired and gave up.

Pinball machine design.  Over the past few years my interest in pinball has slowly overtaken my interest in music and audio electronics, I guess because it involves music and audio electronics as well as other things I love and want to work on like lighting design and toy design and simple robotics.  I’ve been studying pinball machine design and repair in my free time for a while now, and it’s a lot to take in.  Crudlabs Pinball (a Crudlabs-themed pinball machine) should be out in 3-4 years.