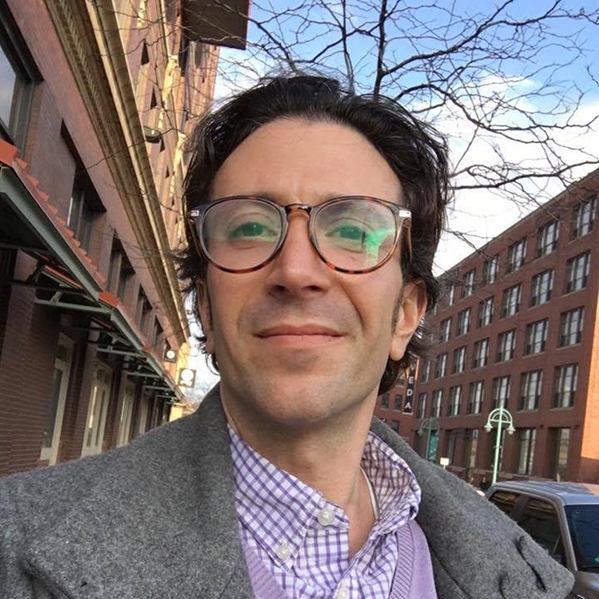 Nathaniel Stern is an artist and writer, Fulbright grantee and professor, interventionist and public citizen. He has produced and collaborated on projects ranging from ecological, participatory and online interventions, interactive, immersive and mixed reality environments, to prints, sculptures, videos, performances and hybrid forms. His book, Interactive Art and Embodiment: The Implicit Body as Performance, takes a close look at the stakes for interactive and digital art, and his ongoing work in industry has helped launch dozens of new businesses, products and ideas. Stern has been featured in the likes of the Wall Street Journal, Guardian UK, Huffington Post, Daily Mail, Washington Post, Daily News, BBC’s Today show, WIRED, Boing Boing, Gizmodo, PetaPixel, Time, Forbes, Fast Company, Scientific American, the Milwaukee Journal Sentinel, Leonardo Journal of Art, Science and Technology, Rhizome, Furtherfield, Turbulence, and more. According to Chicago’s widely popular Bad at Sports art podcast, Stern has “the most varied and strange bio of maybe anyone ever on the show,” and South Africa’s Live Out Loud magazine calls him a “prolific scholar” as well as artist, whose work is “quite possibly some of the most relevant around.” Dubbed one of Milwaukee’s “avant-garde” (Journal Sentinel), Stern has been called “an interesting and prolific fixture” (Artthrob.co.za) behind many “multimedia experiments” (Time.com), “accessible and abstract simultaneously” (Art and Electronic Media web site), someone “with starry, starry eyes” (Wired.com) who “makes an obscene amount of work in an obscene amount of ways” (Bad at Sports) – both “bizarre and beautiful” (Gizmodo). According to Cory Doctorow at Boing Boing, Stern makes “beautiful, glitched out art-images,” and Caleb A. Scharf at Scientific American says Stern’s art is “tremendous fun” but also “fascinating” in how it is “investigating the possibilities of human interaction and art.”

Stern is an Associate Professor of Art and Design in Peck School of the Arts at the University of Wisconsin – Milwaukee, and a Research Associate at the Research Centre, Faculty of Art, Design and Architecture, University of Johannesburg. He is represented by Gallery AOP in South Africa, and Tory Folliard Gallery in the American Midwest. [Images from Giverny of the Midwest.]