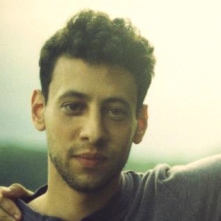 Ben Kauffman graduated from ITP in 2014. He grew up in Boston. We asked him four questions about his time on the fourth floor, where he’s working now, what advice he can offer a current ITPer, and finally, what new “thing” he’d like to learn.

My favorite class at ITP was without a doubt The Temporary Expert, taught by Marina Zurkow. That class blew. my. mind. It was the first time that I had been presented with this idea that art could really engage with other kinds of research and inquiry. Its directly inspired a number of recent projects of mine, even a year after graduating.

Right now, most of my time is spent as co-Artistic Director of my performance collective / film company Manual Cinema. We combine handmade shadow puppetry, cinematic techniques, and innovative sound and music to create immersive stories for stage and screen. Its interesting, because we use a lot of “out-dated” technology to realize our work, namely overhead projectors and paper! But our constant striving to manipulate those tools to create something “cinematic” in a live context, feels very much in line with the ethos of ITP.

My advice to current ITPers would be to create personal and honest work–whatever the medium or field. There’s a lot of technology and tools at your disposal as an ITP student, but to me the trick is how you filter those techniques through your own sensibility. I’m not sure I did that enough at ITP, so its kinda of the advice I would have given myself too.

The idea of “learning a person” sounds by far the most interesting of those choices, lol. I’m a bit obsessed with Stanley Kubrick, the filmmaker, and have been reading about him a lot lately. Besides being an amazing writer, director and editor, he also had an inspiring relationship to technology: he did some crazy stuff with front-projection, invented various optical tricks and special effects himself, and he even modified lenses and cameras to shoot in extra-low lighting.