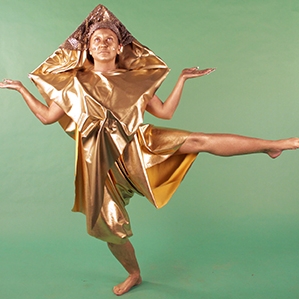 Amy Khoshbin is an Iranian-American Brooklyn-based artist merging performance, video, collage, costume and sound to examine our individual and collective compulsion to create, transform, and sometimes destroy the stories of who we are, who we think we are, and who we think we should be. She produces media and mythologies using humor and a handmade aesthetic to throw a counterpunch at the high-definition, profit-generating codes and signals that American audiences are trained and accustomed to consuming. She has shown her solo and collaborative work at venues such as Brooklyn Academy of Music (BAM), Abrons Arts Center, The Invisible Dog Arts Center, JACK, The Stone, and festivals such as River to River, South by Southwest and MakerFaire. She has completed residencies at The Watermill Center, Lower Manhattan Cultural Council's Workspace Residency 2014-16, Banff Centre for the Arts in Canada, Team Effort! in Glasgow, Scotland, and at the Tisch School of the Arts at New York University. Khoshbin has bachelor's degrees in Film and Media Studies from the University of Texas at Austin and a master's degree from the Interactive Telecommunications Program at New York University, where she graduated in 2009. She is currently in a SciFi rap group called C∆N-D with artist and ITP Alum '09 Michael Clemow. She has also collaborated with Laurie Anderson, Karen Finley, Tina Barney, and poets Anne Carson and Bob Currie among others.