Mark Wing-Davey Talks About Our Training

The Grad Acting Program is a rich tapestry that weaves together many diverse strands of training, presentation, production, professionalism, and evaluation. It would be impossible to integrate so many different elements without a solid, yet ever-evolving, mission statement.

This section expands on that mission, explicating our philosophy in the arc of training, production, and life in New York City. It also contains the Ground Rules that every student agrees to uphold.

The arc of training at Grad Acting is a constantly evolving, but fully integrated, series of classes, based on the respective disciplines of Acting, Voice and Speech, and Movement. On any given day, students will experience all three disciplines and over the course of three years, students will have many of the same teachers, who are constantly ratcheting up the stakes and increasing the skill level demanded of their students. So, the arc of training provides an energetic balance between continuity and surprise, between assurance and obstacle, between confidence and challenge.

The specific classes for each year are described further by their individual instructors.

In your first year, what we are primarily concerned with is an invigorating mix of large playful release and minutely and rigorously observed behaviors.

You spend time getting to know how your body, including your voice, imagination, and feelings are released through the elimination of tension/muscular holding.

There are no ready formulas for acting; it is an art, not a science. The actors' talent and creativity and how and when it blossoms and flourishes is ultimately mysterious. Acting, however, is a craft as well as an art. The actor can acquire tools and practice techniques that can strengthen or deepen their instincts, imagination and creativity; technique serves the imagination.

The second year of training represents the transition from technique to application. Hopefully, we will have (sensitively) stripped away the habits you brought into school as First Year students, and now you can work together as an ensemble with a shared vocabulary. Your skills and applications are brought to a new level: “beats” in Scene Study will take a leap into the craft and objectives of an entire scene; you will be introduced to the technique of speaking Shakespeare and verse; you will move from hand-to-hand combat to armed combat and so forth.

This is a busy and intense year, but full of opportunity and experience, much of it fully integrated with your production and project work.

In the final year of training, we work to tie together all the strands of your training to prepare you to enter the professional world. To this end, there's an increased emphasis on individual tutorial work, specialized dialect work, and coaching in connection with productions. Important classes include working with some of the best teachers in New York to help you begin taking charge of business affairs and learning how to audition, as well as your many options in the world of theatre, film and television.

There are additional workshops to broaden your sense of collaboration, including a unique and essential class at the Public Theater, taught in tandem by Oskar Eustis and Suzan-Lori Parks. You also have the opportunity to work on-camera with experienced professionals as well as students from the NYU Graduate Film Department. In addition, there is on-going selection and preparation for your final scenes for your showcase presentations in Los Angeles and New York.

The arc of production at the Grad Acting Program is organized over three years in a variety of projects and productions that build and evolve your ability to master different texts, different experiences, and different collaborators on an evolutionary route towards entering the professional arena as an actor prepared--and open to--any eventuality and experience. Faculty members support these productions with their involvement in your progress at rehearsals; they will both work with you directly on these productions and/or support the professional who come to work at Grad Acting.

The first year concentrates on a variety of projects performed in the classroom; sometimes presented for the school, sometimes note. You are immediately thrown headfirst into a world that mixes African dance, Xhosa dialect, and medieval English text in an exciting event called “The African Project.” Over the course of your first year, you will also get to begin the first part of an ongoing three-year Chekhov Project and play several roles in Shakespeare project at the close of the year, usually directed by a faculty member or a guest artist well-versed, as it were, in the Bard.

The second year brings some of these ideas into our smaller performance spaces and focuses largely on bringing elements of your classwork to bear on the demands of a role in production. The class is usually split into two separate, concurrent productions, which helps provide an equity of roles for everyone in the ensemble. There will be an “American Naturalism: slot--usually Miller, Williams, Inge, or Odets--then, one of our favorite events, a cabaret, directed by your singing teacher, Deb Lapidus, in our lounge space; this allows you to communicate thoughts and feelings via song. Everyone then works together on an ambitious yearly project that splits the ensemble into two separate productions played concurrently in two connected spaces. Finally, the company splits into two separate productions that focus on language, class, society, and structure; again, usually Wilde, Shaw, or Restoration Comedy. For all of these productions (except the Cabaret), there is shared casting, where you will be often asked to share a major role or play several different parts.

The third year productions move you towards your professional career. The season itself reflects a varied repertory: classical plays (often including Shakespeare), contemporary plays, recent successes from Broadway or Off-Broadway (which offer an opportunity to delve into the work of a playwright whom you might audition for in the “real world”), and the culmination of the new play project developed at the end of your second year. In addition, the class performs in a final Chekhov project, which allows the ensemble to perform the same play in repertory, assuming different roles in different performances. All of these production are directed by artists who are working professionals, with a wide range of experience and expertise. An important aspect of your final year is "Freeplay" which allows you to conceive, produce, write and/or act in your own performance piece; we have had up to a dozen such projects for each Freeplay season. Your production year culminates in your showcase presentations, which give you the opportunity to present your talents in both Los Angeles and New York to professional agents, casting directors and producers.

An innovative segment where every aspect of the student's curriculum includes an investigation about working in and the aesthetics of film. 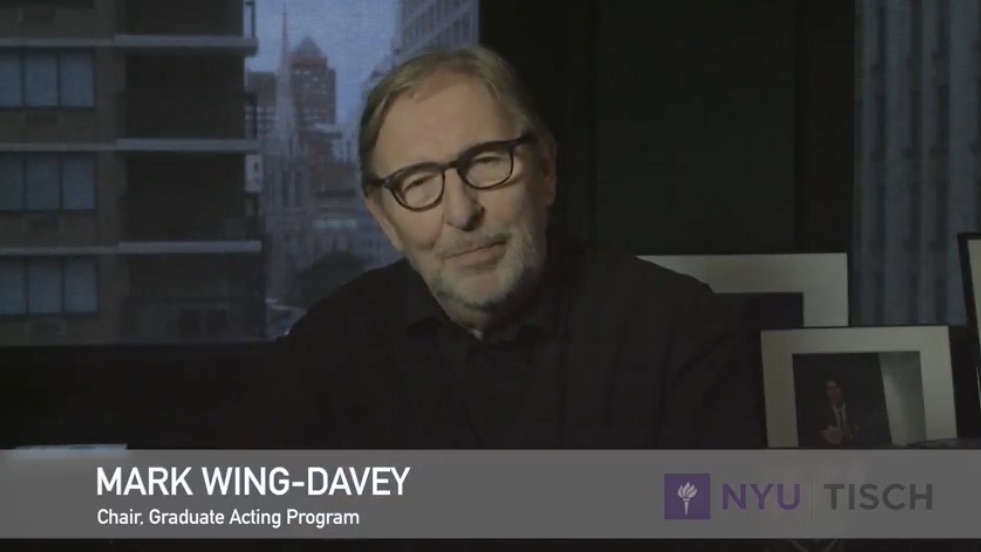 From a cultural point of view, New York City is unparalleled. Our students regularly attend productions on Broadway, off-Broadway, off-off-Broadway and the latest Hollywood and independent films. (Many of these viewing opportunities are offered to us free, or at reduced rates, often thanks to our alumni who are appearing in them.) In addition, the world’s greatest museums, galleries, restaurants, and libraries are used for research and field trips; they are only a brief walk or a subway ride away. Greenwich Village itself provides many bookstores, record stores and video stores to buy or rent material for class.

We pride ourselves on making major artists accessible to our students. Every year, three to four guest speakers give special talks to our students. These artists have included our finest actors: Kevin Spacey, James Earl Jones, Meryl Streep, Philip Seymour Hoffman, John Lithgow, Nathan Lane, Audra McDonald, Rosemary Harris, John Turturro, Diane Wiest, and Patti LuPone as well as visiting artists from around the world: Alan Rickman, Ian McKellen, John Kani and Winston Ntshona, Hugo Weaving and many more. Major directors such as Kenny Leon, Declan Donnellan, and Richard Eyre have come to speak, as well as playwrights such as Suzan-Lori Parks and Tony Kushner. Special workshops, unique to our students, have been offered by actors and directors such as Liev Schreiber and Maria Aitken. No other school can offer such a dazzling array of visiting artists, and on such an intimate and tactile level.

While an important theme of the program is that theatre takes place wherever there are people to gather around, New York City still offers the highest concentration of resources for students to work and play. There is no other playground (or studyground) like it in the world, and our faculty is here to make sure your education exploits every ounce of the city’s tremendous creative energy. 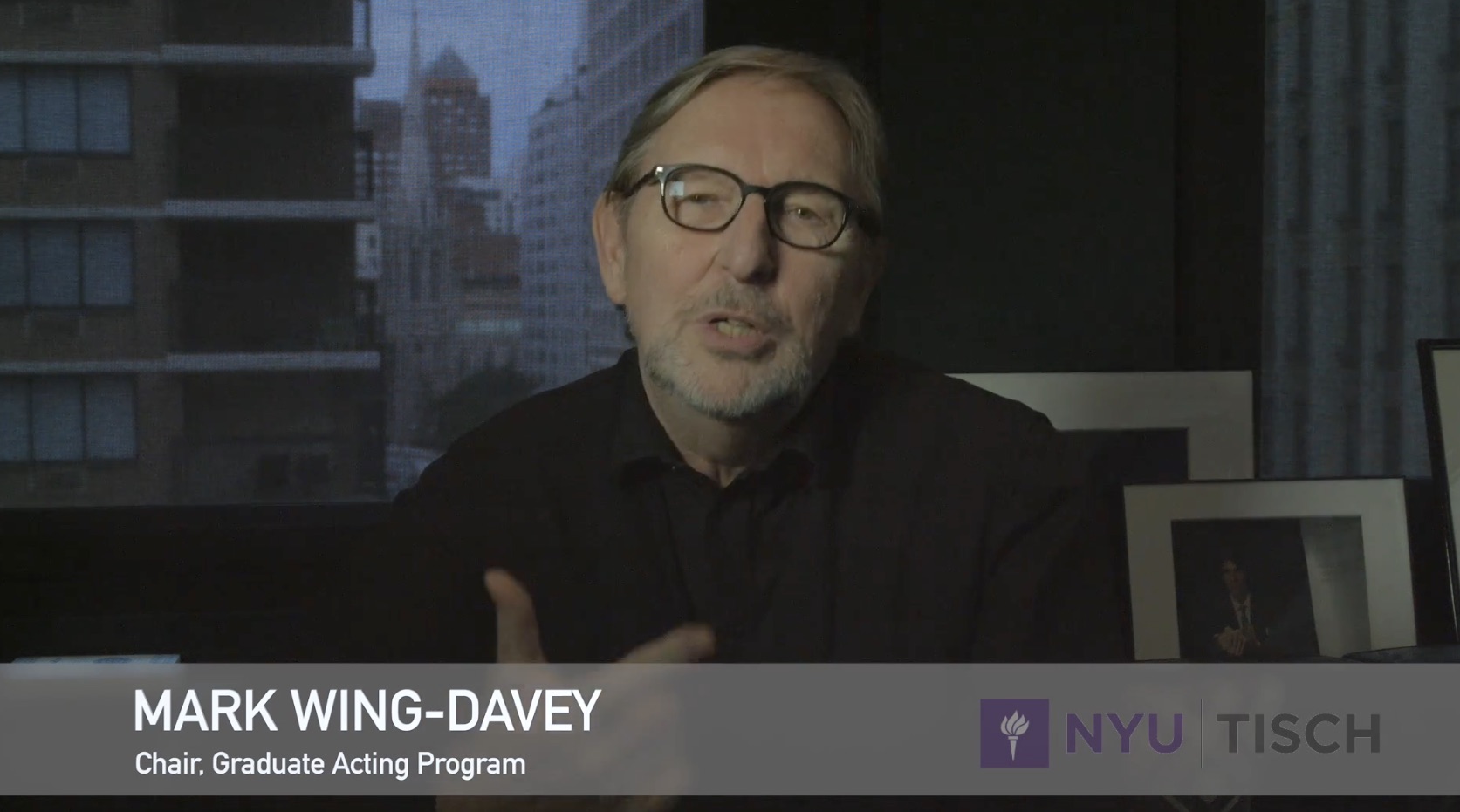 Your very first project as a class immediately throws you headfirst into a world that mixes African dance, Xhosa, Afrikaans, singing by ear, and ancient stories in an exciting event called “The Agrarian Project.” The project quickly generates a deeply connected and communicative ensemble while working outside everyone's area of familiarity in some form.

Graduate Acting is fortunate to be housed along with one of the great films schools in the country. Each year our graduating students with with Graduate Film directors on short films that feature and are often written specifically for our actors.

Grad Acting has partnered with New Dramatists to develop new theatre works that will premiere in our program's annual season of plays. Each year, Grad Acting will commission a current or alumni playwright member of the New Dramatists to workshop and write a new play. These plays are written specifically for our students after a research period where the director, playwright, designers, and actors all explore ideas and issues for the play. Recent playwrights include: Mashuq Mushtaq Deen, Sarah Ruhl, Lucas Hnath, Mona Mansour, Christina Anderson, Rajiv Joseph, Adam Rapp, Rhada Blank, Keith Reddin, and Qui Nguyen among others. Many of these play have continued into production beyond NYU.