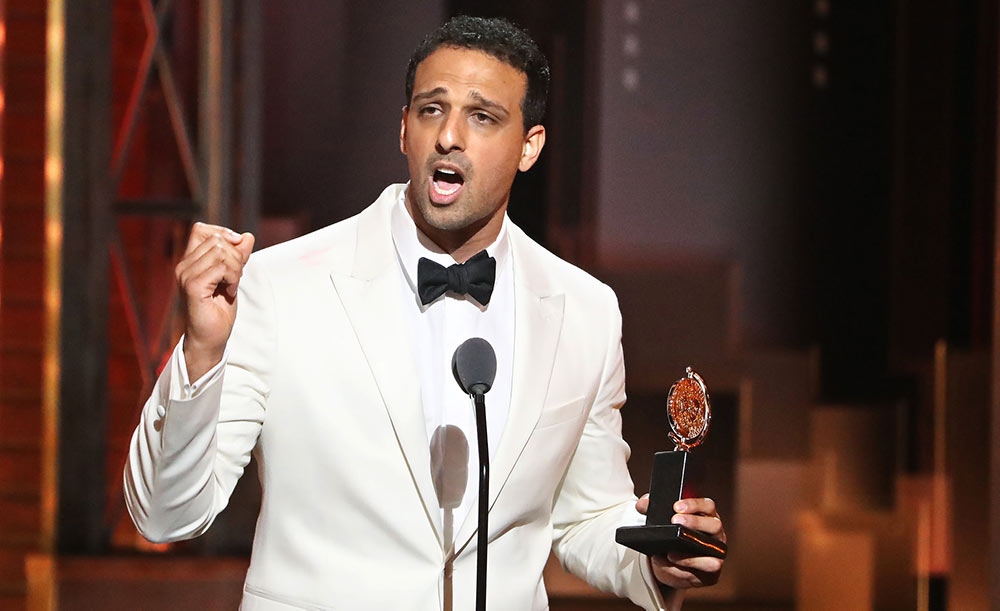 Ari’el Stachel ’13, an alumnus of Tisch Drama’s New Studio on Broadway, was named “Best Featured Actor in a Musical” for his role in The Band’s Visit during the 72nd Annual Tony Awards on June 10.

In a moving and highly personal acceptance speech, the Israeli-American actor recognized his parents in the audience and thanked the musical’s creators for their courage in bringing the adaption of the fictional 2007 Israeli film to the stage—a story about Arabs and Jews finding common ground.

“I am part of a cast of actors who never believed that they would be able to portray their own races and we are doing that,” he said during the ceremony at Radio City Music Hall. “And not only that, we are getting messages from kids all over the Middle East thanking us and telling us how transformative our representation is for them.”

“I want any kid who is watching to know that your biggest obstacle may turn into your purpose,” he said in closing.

The Band’s Visit, which won 10 awards, was perhaps the perfect vehicle to deliver Stachel to fame, the New York Times reported. In addition to Tony recognition, the role led to Lucille Lortel and Drama Desk Awards nominations for Stachel.

In a May interview, Stachel told Backstage he auditioned for the show seven times before booking the role of smooth-crooning flirt Haled for the 2016 Off-Broadway run at the Atlantic Theater Company.