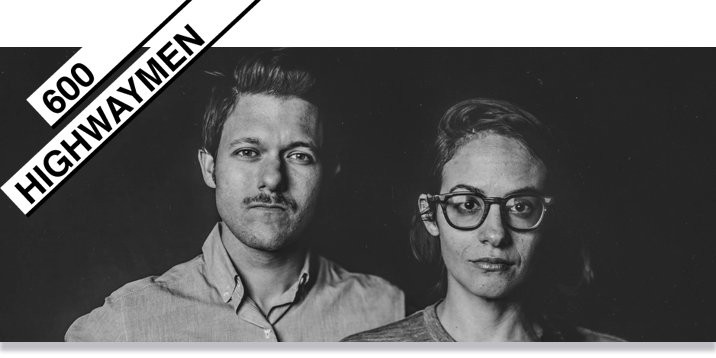 This spring, Tisch Drama is thrilled to welcome the renowned 600 HIGHWAYMEN—the moniker for theatre artists Abigail Browde and Michael Silverstone—as our spring artists in residence. Over the past several weeks, Browde and Silverstone have collaborated with students, faculty, and staff to develop and direct Fiction., a new work. The production will be the second offering in the 2018-19 TISCH DRAMA STAGE season.

Tisch Drama recently caught up with the duo to discuss the project:

Congratulations, Abigail and Michael, our featured artists in residence! Thanks for taking the time to chat. Can you start by telling us a little more about your company and its unique approach to theatre making as an “investigation of presence and humanity”?
It’s a way of describing that which interests us most, which is people, and more specifically what is exchanged when we let go of certain ideas. What if we are who are, and we deal with what happens when we catch each other’s gaze? What’s also present is the story of us coming together in the here and now. Other forms of performance such as live music, or even sporting events, manage to make the experience so live. This is our spirit, too. The work is our curiosity. And that curiosity connects to the people onstage, what their bodies tell us, and everything in between, both real and imagined. So much can happen there.

Where did the name 600 HIGHWAYMEN come from?
We have been making shows together for about 10 years, but it wasn’t until a couple years in that we decided to use a name—“600 HIGHWAYMEN” comes from Waiting for Godot, but it’s buried in Lucky’s long monologue toward the end of the play. We like that it doesn’t actually say much—certainly nothing about theatre—but it conveys a feeling.

How do you feel you’ve evolved over the years?
Our earliest shows were made in the basement of a church in our Brooklyn neighborhood. Our casts were composed of strangers, senior citizens, individuals of all walks of life. There was no common language in the room, which was freeing, actually. These early shows seemed to be digging toward something ancient, or elementary. In addition to the performance, all the elements leading up to the performance was what we were making… And we started to see the process differently. In 2013, we were invited to perform in Europe for the first time, and that invitation opened us up to new perspectives, new imaginings. It’s less about us trying to wrangle some sort of idea or material, and more about bringing to surface all the things we’re thinking about at the time.

As for your latest work—Fiction.—can you tell us about the origins of the project, and your vision for the piece?
We’ve always loved Diane Arbus, the photographer, because her photographs give us humans as they really are. To us, the people she photographed feel like America. But this isn’t a performance about the photographs, or even Arbus. It’s about the way that she got to the heart of things. We’re trying to do the same, and it has to do with how we get to know one another, how we change each other, and how we configure ourselves in response to the gaze of others.

How has your experience working at Tisch Drama been so far? What have our students brought to the conversation?
We’re loving the experience. It was very hard to cast the show because we were drawn to so many people who auditioned. But we knew eight was the right number for this project. The way we work, we really need everyone involved to find their own investment in the work. And we’re really happy by the entire team.

Speaking of working with us, I heard you two met here at NYU. Can you tell us more about that?
Yes, we both were in the Drama Department—and we hated each other! (laughs) But we shared a professor, Branislav Jakovljevic, who changed both of our lives. In fact, later, we saw Branislav, and it felt great to tell him what his class meant to us, and how it had changed us... After graduating, we found ourselves at Niagara Falls together, with friends—a trip that would reverse everything. We were both working in different creative directions, but not satisfied, and started working together because we liked how the other person thought. And while we do things differently, we also share a lot of the same sensibilities and are both relentless in the creative process.

What has been your favorite part of this collaboration at Tisch Drama?
While we’re trying to make the show, yes, it’s also about our time together as a group—how we inspire one another and affect each other. Sometimes in rehearsal we’re working more on general performance questions than the actual show. It feels like a very honest process—that when we ultimately invite the audience in, every element of our time together will somehow be at play.