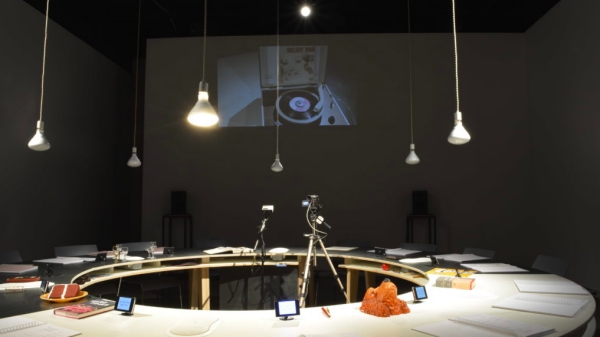 My talk examines the work of three contemporary artists whose speculative practices of listening stage a conversation between documentary and forensic aesthetics. Alison S. M. Kobayashi, James N. Kienitz Wilkins, and Lawrence Abu Hamdan all listen with forensic scrutiny to recorded voices as the basis of their artistic practice: a decades-old amateur wire recording, a downloaded transcript of a 2006 public hearing in a New York town, and cassette tapes of audio tests employed by immigration authorities. They listen for testimony that eludes the forensic gaze and ear and materialize the practices of listening whereby documentary evidence becomes audible. I situate their work in a long history of reflexive documentary practices that have sought to trouble the evidentiary basis of documentary realism.  Kobayashi, Wilkins, and Abu Hamdan diagram the usefulness of documentary as a civilian art of counterforensic listening: one that seizes forensics from state control and democratizes the forum of its interpretation.

Pooja Rangan is a documentary scholar and writer based in Western Massachusetts and Brooklyn. She is the author of Immediations: The Humanitarian Impulse in Documentary (Duke UP, winner of the ACLA 2019 Levin Prize for Outstanding First Book), a book that examines the humanitarian ethic of giving voice in participatory documentary. Rangan is Associate Professor of English and Film and Media Studies at Amherst College and Board President of the Flaherty.