A Talk by Peter Terezakis 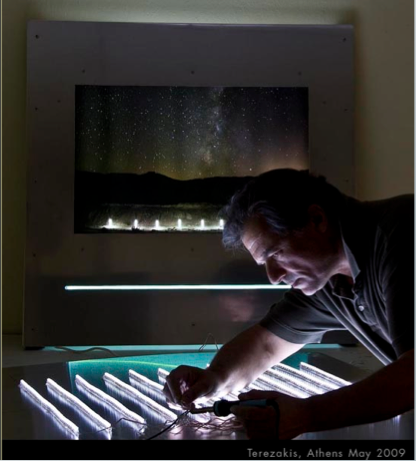 Heart Beats Light and other stories from the edge

Peter Terezakis has created interactive works of varying scale and possessing a distinct technological character since 1974.  These include inventing and manufacturing Mykro Dot electronic jewelry, ESP tester-trainers, wall-sized interactive sculptures, an interactive building, a flame which speaks the collected names of God, and the current site specific installations of Heart Beats Light and the Sacred Sky Sacred Earth series of performances begun in 1996 and 2007.

Sacred Sky Sacred Earth: Alpine was the first project which was developed as a community effort to help prevent the conversion of a Southern California open space into housing.  Since then Terezakis has been involved in several projects whose mission was to prevent industry from transforming natural environments into industrial sites.

As adjunct faculty at the School of Visual Arts, Terezakis helped to develop the Extended Forms major within the MFA Computer Art program.  His work is featured in Bruce Wands’ textbook, Art of the Digital Age and as a pioneer in 3D Printing for Artists, Designers and Makers by Stephen Hoskins. Terezakis’ works have been exhibited in Canada, Japan, Latvia, Mexico, Portugal, Romania, Slovakia, Spain, the United Kingdom, and the United States.

In the fall of 2012, Terezakis left San Diego to enter New York University’s much vaunted Interactive Telecommunications Program where he focused on particle physics.  After developing battery-operated beta and gamma radiation detectors, his thesis project was a wearable alpha-particle detector based on the pioneering work of the Curies.

As a visiting artist Peter Terezakis is engaged in sharing his awe, curiosity, and love for art, nature, science, and technology with future generations of artist-activists.