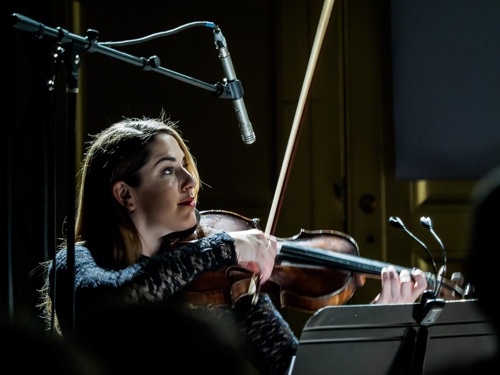 Jeanann Dara, violist and NYU Performance Studies M.A. candidate will perform the work of Pauline Oliveros with the Darmstadt Ensemble.

This performance was listed in the Village Voice for top picks this week!

The New Sounds Live concert series returns to Brookfield Place for a tribute to Pauline Oliveros. Concert is free, and will be recorded for later broadcast on New Sounds with John Schaefer on WNYC. New Sounds provides a place for your left and right brain to unwind at the end of day. Host John Schaefer combs recent recordings for one of the most educational and enchanting hours on radio. For 30 years, he's been finding the melody in the rainforest and the rhythm in an orchestra of tin cans. The program offers new ways to hear the ancient language of song. With guest musicians from David Byrne to Meredith Monk to Ravi Shankar, Schaefer presents performances and premieres new works from the classic and operatic to folk and jazz. Tune in for the next wave or the most ancient forms of music.

Pauline Oliveros was a musical pioneer several times over. She began exploring tape and electronic music as far back as the late 1950s. Her interest in the subtle properties of sound led her to the world of just intonation, a tuning system that leaves the notes in their natural state (as opposed to the “tempered” notes we find on a piano). The rich harmonic world she worked in was the perfect vehicle for her Sonic Meditations – a groundbreaking approach to music as not an intellectual exercise, but an emotional and physical experience. Her interest in “Deep Listening” led her to experiment with unusual sonic venues; she was particularly fond of places with rich reverberant properties (like the Winter Garden atrium), and developed a sophisticated electronic component for many of her works that enabled her to bring that sonic density to concert halls and venues around the world.

Oliveros also believed in the act of music-making as a communal art. She traveled the world leading audiences in Sonic Meditations where everyone in the venue would hum, or sing, or somehow contribute to the “performance.” She wrote hundreds of works where the score was not traditional notes on a staff, but rather a series of simple, practical instructions – or suggestions – on how to bring the piece to life. These works can be played by virtuoso professionals, or by anyone with open ears and the desire to try them. (-John Schaefer)

The inimitable PAULINE OLIVEROS was an iconoclastic contemporary American composer whose career spanned fifty years. She influenced American music profoundly through her concert works, as well as her work with improvisation, meditation, electronic music, myth and ritual. Oliveros was as interested in finding new sounds as in finding new uses for old ones --her primary instrument was the accordion, an unexpected visitor perhaps to musical cutting edge, but one which she approached in much the same way that a Zen musician might approach the Japanese shakuhachi. Pauline Oliveros coined the term "Deep Listening,"  which she described as a way of listening in every possible way to everything possible to hear no matter what you are doing.  She also founded Deep Listening Institute, formerly Pauline Oliveros Foundation, now the Center For Deep Listening at Rensselaer.

Learn More
Learn More about Jeanann Seidman
< Previous Alum Molly Castelloe to Screen Her Award-Winning Documentary Next > M.A. Matt Fennelly in "Catch Me If You Can"