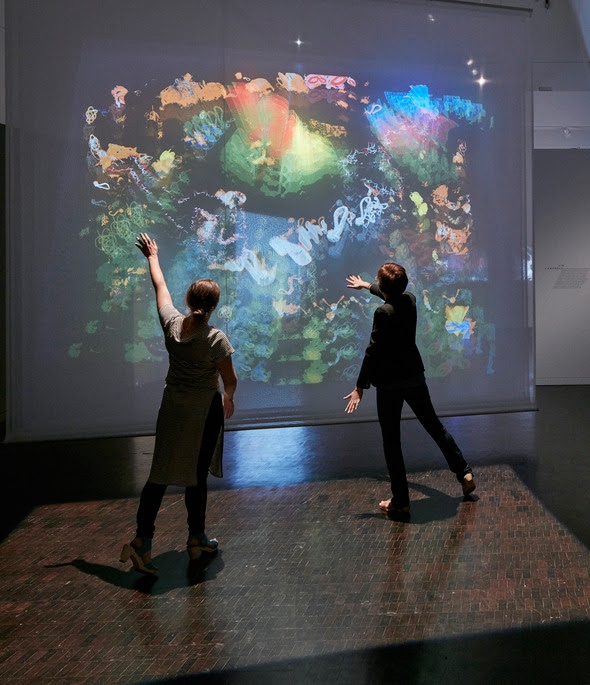 The Department of Art & Art History at Stanford University presents Sustaining Presence, on view from January 24 to March 26, 2017 with a reception on Thursday, January 26, from 5-7 PM, at the Stanford Art Gallery. This solo exhibition by Camille Utterback, Assistant Professor in Art & Art History, highlights computationally generated and interactive works from Utterback’s recent practice and includes the debut of a series of sculptures combining glass and projected media.

Utterback is well known for her room-sized and architectural-scale interactive installations which explore the aesthetic and experiential possibilities of linking computational systems to human movement. These works use technology to return people’s experience to an embodied present, rather than to remove us from our surroundings and each other. In keeping with Utterback’s larger body of work, the pieces on display focus attention on the sustained relevance of our embodied presence and sensual material experience in our increasingly mediated world.

Sustaining Presence traces a new physicality emerging in Utterback’s work - screens become sculptural elements arranged in space, and materials such as scrims or shaped and colored glass are combined with digital imagery to create a richly layered perceptual experience. With this evolving vocabulary, Utterback makes work where the material richness of the world is sustained in an active dialog with the digitally rendered elements.

Through slowly evolving animations and cyclic video imagery, the temporal cadences of Utterback’s work hint at a more critical stance. Themes of appearance and disappearance, visibility and obfuscation evoke our continual desire and continual failure to maintain control through our technologies. In order to sustain presence, the work suggests we must also embrace our inherent vulnerabilities and temporal finitude.