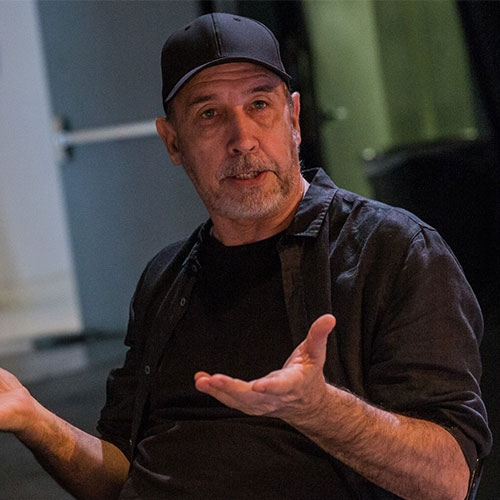 Kevin Cunningham is an award-winning New York based producer, director, writer, designer and entrepreneur. He is the founder and Executive Artistic Director of 3-Legged Dog.

In 1994, he began producing his own multimedia performance works as a writer, director and production designer at La Mama, PS 122, The Signature Theater, The Kitchen, 3LD and the Ontological Theater. Works include Automatic Earth, The Realism of Simple Machines, Degeneracy, Losing Something, Spy Garbo and with his frequent collaborator Chuck Mee, the immersive theater work Fire Island.

Over the last five years he has worked on the very large-scale immersive work called Not-Knowing with Mee. Not Knowing incorporates large scale holographic and immersive projection with tracked video mapping techniques to create a “mixed reality bridge” between cinematic and lived reality. He is also collaborating with Academy Award winner Carol Dysinger on the creation of an immersive performance and expanded cinema work called One Woman War based on Dysinger’s 16 years as a documentarian of life in war zones in Afghanistan.

In 2017, Angels Bone, the opera he produced with the Prototype Festival, won the Pulitzer Prize.

The 3LD Immersive Platform is an integrated digital platform that includes a video mapped space with multiple powerful creative tools and interactive systems 42 artists have created work on the platform since 2017. The platform continues to accrue tools and capabilities as each artist works on it.

Return to Reality (working title) is a creative, curatorial and technological set of strategies to keep audiences engaged with artists and arts organizations as they create a sequence of works or shows that slowly bring audiences through virtual interactive works to fully live gatherings around original art works and events.