This December, Tisch Drama is thrilled to welcome award-winning Minneapolis-based playwright Carlyle Brown and company for the Afro-Atlantic Playwrights Festival—a continuation of a workshop and residency that took place at the Camargo Foundation in Cassis, France, last summer, highlighting themes of identity, authenticity, and the different ways international boundaries shape the African experience.

Conceived of by Brown, the workshop brought together eight African and African-American playwrights—with Brown and theatre director Chuck Mike as curators and facilitators—who developed their texts for readings. Tisch Drama will host a second series of readings of the plays, each followed by a talk-back with the author, actors, and director December 4–6.

Tisch Drama recently caught up with Brown to discuss the project:

Carlyle, thanks so much for taking the time to chat! Can you start by telling us a little more about the origins of the project, your vision for the residency, particularly as it relates to the Afro-Atlantic aesthetic?
My overall artistic practice as an African-American theatre artist is rooted in the traditions of the West African Groits who, with their songs and recitations, are the traditional storytellers, the living books and repositories of the history of African people in oral culture. In African-American culture I consider blues singers, preachers, stand-up comics, spoken word artists, and some playwrights to be part of that tradition, and I view the Atlantic Ocean as a cultural lake with a principal port of the West Coast of Africa. I have long been fascinated by the mysteries of the transference of those aesthetics and traditions from Africa to the new world through the transatlantic slave trade and how it managed to survive through subversion and rebellion, the oppressive, subjugating atmosphere in which it shaped and transformed itself into one of the major cultural influences in the world. This phenomenon has been much investigated and discussed in the areas of dance, music, art objects, religiosity, and even the art of Carnival—but not so much in the world of theatre and performance has this trans-Atlantic connection been brought to the world’s full attention. It was out of this interest that the Camargo Cultural Diaspora program came into being.

What was the “goal” or mission of the summer residency?
The idea for the Camargo African-American/African Playwrights’ Residency was to bring together African and African American text-based theatre artists from opposite ends of the Africanist Diaspora to share work, ideas, and strategies for surviving as Black artists, without the veil of a white/western filter, without having to explain themselves, without having to represent an entire group of people, but to explore their craft, their voice and their African-ness in a beautiful, safe, supportive environment with like minded individuals. 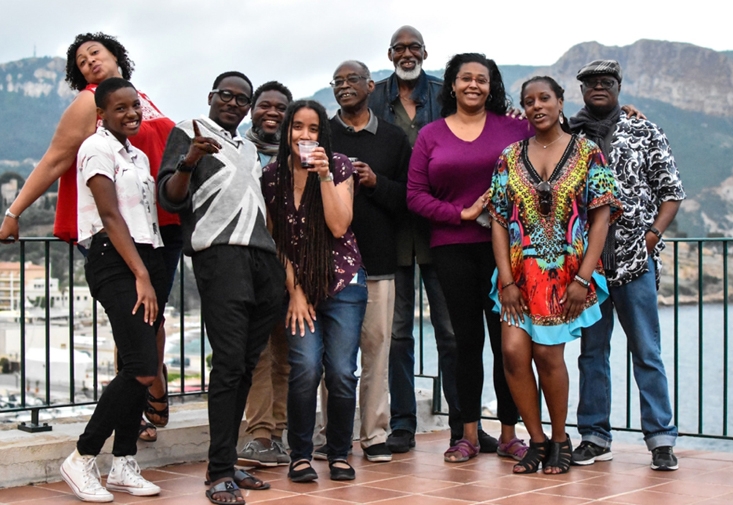 How do you feel this has evolved over the past year?
The initial goal of these eight black playwrights from Africa and the United States was to explore, through developing new plays in a secluded residency, our connection to the Afro-Atlantic world and it’s ensuing Afro-Atlantic culture. With enormous generosity of the Playwrights’ Center in Minneapolis, we were invited to share our transformative experience with a larger world and further develop these gorgeous, stunning plays in the first Afro-Atlantic Playwright Festival. The success of the festival has led to readings of the plays at NYU in December 2019, at the Kennedy Center in February 2020, and the National Theatre of Ghana in the spring of 2020, where Femi Osofisan’s piece—which takes place in Ghana, tracing a story of its early independence—will be featured. France-Luce Benson will attend the Sacatar Artists Residency in Brazil in November/December, working on the final installment of her trilogy on the Haitian Revolution. Lastly, Zainabu Jallo’s play will be featured in the 2020 volume of African Theatre in Europe and has inspired a conference on migration and aging at the University Bayreuth in Germany. In addition, I will be directing a production of Zainabu’s play at Illusion Theater in Minneapolis scheduled for the Spring 2021.

As for the upcoming presentation of readings at Tisch Drama, what are your hoping audiences will take away? Is there a certain dialogue you’re hoping to prompt?
The roundtable panel will consist of two of the playwrights: Haitian-American France-Luce Benson, and Zainabu Jallo, Nigerian born, living between Switzerland and Brazil, myself, Professor Michael McElroy, moderated by Professor Judith Miller.  We hope to have a lively, informative discussion about the African Diaspora and Afro-Atlantic culture—its roots, evolution, and future in generating new narratives and new ideas.

Learn more about the festival.