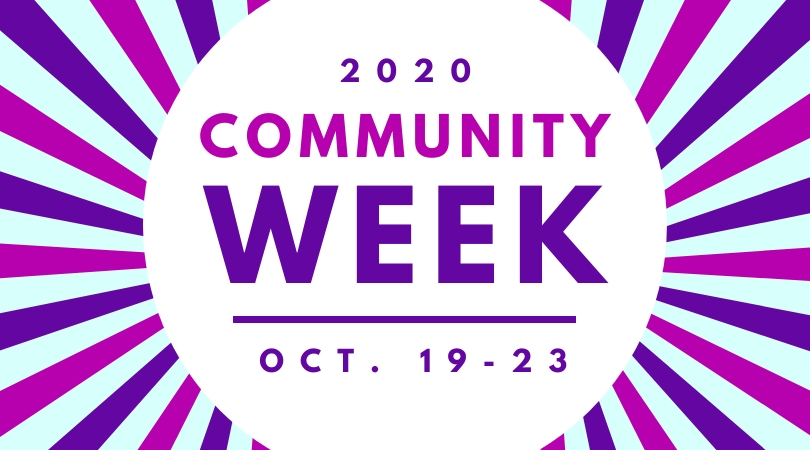 Each October, more than 1,700 members of the Tisch Drama Community—faculty, students, and staff across the department’s 10 training studios and Theatre Studies program—come together to build relationships with new and existing communities as part of the Tisch School's annual Community Week, October 19-23.

Throughout the week and on Community Day (October 23), the department will host an exciting array of collaborations, activities, and discussions reflective of the topic of community.

First up is a collaboration with artists in residence Jonathan McCrory and Ebony Noelle Golden from the National Black Theatre, A Soul Session: Creating Our Future Now. The event is co-hosted by Drama's Office of Diversity Initiatives in partnership with student organization, the Alliance, and will offer conversation, regeneration, and celebration. The event begins at 7 p.m. EDT on Wednesday, October 21. Learn more.

Additionally, the department will co-host with Tisch Open Arts Holding Breath—a facilitated 24-hour community experience where care can be shared, collected, and held with others. Participants will be able to choose a 15-minute block of time and enter an online room, where they will locate the breath in relation to others, find a collective rhythm, express a response, and gather the breath yet again. The event will start at 7 a.m. EDT on Thursday, October 22, and end at 7 a.m. on October 23. It is organized by NYU faculty Nisha Sajnani, Joe Salvatore, Mary Bitel, Kristin Horton, and Mauricio Salgado. Learn more.

Throughout the week, the department’s professional training studios and Theatre Studies program will host an exciting array of activities, events, and programming. The line-up includes conversations, a talk-back series, community lunches, and more. Here’s a sample:

The Atlantic Acting School
Leading up to Community Week, on Friday, October 16, Tisch Drama's partner studio the Atlantic Acting School will host a “Buddy Lunch”—at which students will have time to formally check in and reconnect with their "cluster" groups. Then, on Friday, October 23, Atlantic will continue its diversity, equity, and inclusion training with consultant Dr. Bridget McCurtis, marking students' second workshop this semester.

The Classical Studio
Members of Tisch Drama's Classical Studio, who have been in collaboration with members of the Animation program in Tisch Undergraduate Film & TV, will join one another for a game night. The studio and its Animation counterparts will trade work for play and socialize around online games that draw on each group’s disciplines: a drawing game here, a charades game there. Through play, each group will invest further in the imaginations of their counterparts.

Experimental Theatre Wing
Throughout Community Week, Tisch Drama's Experimental Theatre Wing will host several digital "In the Hallways" sessions: mixers where students will mix and mingle online with each other, faculty, staff, alumni, and other members of the wider Tisch community. In the studio's long-standing tradition, ETW will gather together online for a day of community celebrations on Friday, October 23, spending the day sharing classwork and conversations with each other, as well as other social adventures.

The Meisner Studio
Tisch Drama's Meisner Studio will host a town hall event via Zoom, paneled by faculty and the Meisner's Multiracial Coalition (MMC). Studio Director Vicki Hart will offer a short introduction to the MMC president and vice president, followed by a Q&A session.

New Studio on Broadway
Tisch Drama's New Studio on Broadway students will create and decorate a short, positive message that could apply to anyone in NSB or in Drama, take a picture of it, and post to a platform so everyone could be instructed to go and "get some positivity."

Playwrights Horizons Theater School
Playwrights Horizons Theater School will be offering a few one-off events and launching several ongoing community-building initiatives during Community Week, starting with a new Weekly Digest. The newsletter will include announcements, events, resources, opportunities for community engagement, and updates from the student-led affinity and union groups. Additionally, during the studio's Affinity Group hour on Friday, October 23 at 11 a.m. EDT, Libby Peterson (Manager of Student Affairs) will be facilitating a White Accomplice Workshop for any interested white-identifying students, introducing tools on how to show up as a white accomplice in the classroom. Student affinity and student union representatives Kiara Negroni-Martinez and Neeta Lachmandas are organizing a community creativity and co-working gathering. And the studio's faculty working group on Equity, Anti-Racism, and Accountability will launch an ongoing series of monthly Faculty Roundtables in collaboration with the student-organized affinity group and student union, holding space for deeper dialogues on topics that emerge in classrooms. Lastly, PHTS Director Tomi Tsunoda will begin hosting Tea Times: 30-minute virtual slots for students to sign up for, and connect with her. This space is being held to chat more informally and more deeply while we are not physically in community with each other. Tea Times will be held Tuesdays from 11 a.m.–5 p.m. EDT, and Wednesdays from 12:30–5:30 p.m. EDT.

Stonestreet Studios
On Wednesday, October 21, from 2–3 p.m. EDT, Stonestreet Studios at Tisch Drama will host a guest talk-back series with BIPOC alumnus Nik Walker, who is currently working across film, TV, and theatre on many projects. Walker will talk about life, work, and community, with special attention to "where we want the industry to go as an inclusive environment giving voice to the BIPOC community," along with "why I'm voting PSA."

Theatre Studies Program
Theatre Studies faculty Sebastián Calderón Bentin and Awam Amkpa will lead a conversation as part of Performance in Critical Times on Thursday, October 22, from 12–1:30 p.m. EDT. From the Rhodes Must Fall student movement in South Africa to water protectors fighting the Dakota Access Pipeline in the United States, decolonial knowledges and strategies continue to gain visibility as social, environmental, and economic justice movements around the world challenge entrenched forms of exploitation and extractivism in the face of racialized climate chaos. In what ways can we think and rethink decolonization as a political concept, a historical process, and a set of everyday practices? And what might be the role of performance, theatre, and the arts within decolonial politics? Join Amkpa and Bentin for a conversation exploring these questions as we situate decolonization across different geographic and historical contexts. RSVP here.