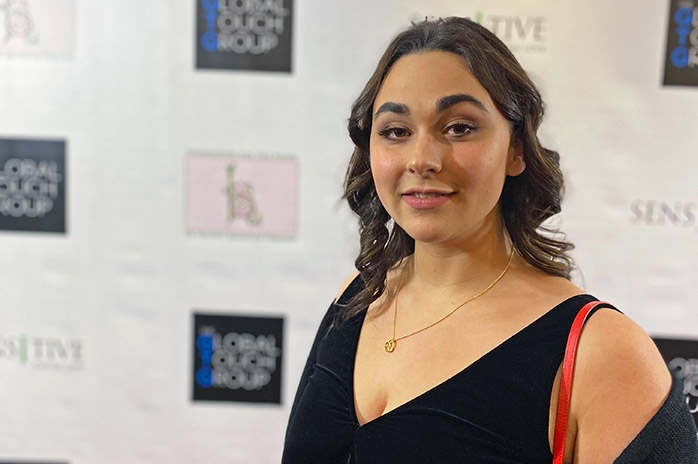 On Wednesday evening, recent alumna Bianca Rogoff (class of 2019) walked the red carpet at the world premiere of the new film Sensitive and in Love—which she stars in—at the Directors Guild of America Theater in New York.

Also in attendance was Rachel Friedman, head of Tisch Drama’s Office of Career Development & Alumni Engagement. Friedman went to congratulate Rogoff and learn about her experience while shooting the film.

“It was helpful that I had just finished a semester at Tisch Drama’s professional training partner Stonestreet Studios when I was cast,” Rogoff said, who completed primary training at Tisch Drama's New Studio on Broadway before that. “I got the audition while in studio and needed to record sides. So Cormac Bluestone (one of the instructors) helped me prepare, and Stonestreet provided space and equipment,” she added.

The film is based on the work of Elaine Aron—world renowned psychologist whose international bestseller The Highly Sensitive Person revolutionized how many view the 20 percent of the population who are highly sensitive emotionally. Rogoff got the part—playing the pregnant wife of a man who is highly sensitive.

“My training at Tisch Drama and Stonestreet gave me the experience I needed”—a comfort in front of the camera, which she’d require from day one. “I realized I knew exactly how I wanted to approach the work and to translate that emotion going into filming, and felt I delivered a really visceral performance. I can attribute that level of preparation and precision to my training at Tisch.”

The film speaks of death, marriage, abuse, and finding love, and explores how love can come through many different forms of relationships. Learn more.