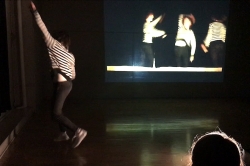 Beckett Melville, a third-year Tisch Drama student, waves her arms in front of a small camera positioned on a chair. The motion is captured and projected onto the back wall. After a moment, she steps to the right, spins in a circle and walks away—one, two, three seconds pass—and a second rendition of Melville appears.

The recorded footage of Melville is played back in a loop three times, separated by three-second delays—creating a contagion of performers on the wall. (See video)

The pilot project was held every day for two weeks, at Tisch and in NYU’s Brooklyn-based MAGNET center (Media and Games Network). It was made possible by a generous donation from Tisch Drama alumnus Brendan Bradley, who had approached the university about supporting students in the development of theatrical pieces using new technologies. Tisch Drama Chair Rubén Polendo responded, and he and Bradley came up with the idea of a “lab” to give theatre students a way to incorporate technology in their craft, process, and practice.

At the end of the two weeks, six students had created prototypes in movement, site-specific performance, virtual and augmented reality, wearable technologies, archaeological narratives, and more.

“We created a space where we could experiment,” said Attilio Rigotti, who facilitated the pilot lab. “There was no pressure for it to be good, or instant. We were constantly prototyping and casting, with the focus on process over product.”

Likewise, Bradley described the lab as a think tank for young artists who were looking to share tools, knowledge and ideas about the future of storytelling, and its relationship to technology.

“My ultimate goal is to help protect and incubate student ideas,” Bradley said, “allowing (students) to leave their undergraduate experience with both a prototype for their ideas and the ability to articulate and execute those ideas in collaborative environments.”

As for Melville, the lab was an ideal space for sharing ideas. Originally, she came to NYU to study acting, but also had interest in the narrative of games. So, she later applied for and was accepted into Game Design as a double major.

“Through this innovation lab, I’ve been exploring how technology can turn a player into the audience, and the audience into players,” Melville said.

Cope explored virtual reality (VR) in the lab, and at the end of the two-weeks, presented ideas on what it might look like to put an audience member in the world of VR.

“I want to show that to other people, to create some sort of experience that is putting an audience member in the world of virtual reality, and making that the performance as well.”

“This has to lead with an interest on your part as students,” he told them. “My hope is that we have a space for this in the future—like a production around innovation—and it becomes a space for imagination for the entire community.”

Bradley said his dream is that students in the lab will develop work that ultimately makes an impact in the business and culture of live performance, and that they return to contribute their time and support to future lab participants.

“Human storytelling and expression will inevitably continue to evolve as ubiquitous technology rapidly integrates itself into every facet of our art and entertainment,” he said. “As we educate young minds in every discipline and industry to utilize digital tools and strategies, it is necessary to do the same in our fine arts training.

“I believe the lab has the potential to inspire and support the next generation of innovative storytellers and cultivate a 21st-century approach to arts education.”