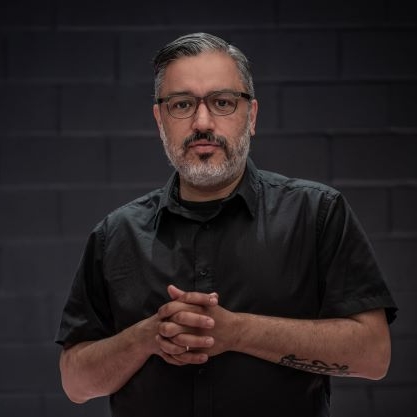 Rubén Polendo is a theater director and the founder and artistic director of the permanent group of collaborators, Theater Mitu. He and his company work towards expanding the definition of theater through experimentation with its form. Polendo and his company research and investigate global performance as a source for their training, work, and methodologies. This is all driven by what he calls, "whole theater," a theatrical experience that is rigorously visual, aural, emotional, intellectual and spiritual all in the same moment. In addition to his scholarly work, Polendo produces theatrical productions that bring these ideas to life. He has written and directed a great many works with his company that have premiered in theaters in New York City and around the world. Some of these include: Mansion (Beirut, Lebanon), Black Box (Ulaanbaatar, Mongolia), Visthar (Bangalore, India), Manarat al Saadiyat (UAE), Baruch, New York Theater Workshop, CSV, The Public, INTAR, Blue Light, Lincoln Center, A.C.T., McCarter, The Perseverance, NAATCO, Mark Taper, Alliance, ETC and South Coast Rep. His Awards and recognitions include the prestigious MAP Fund Grant, the CEC Arts Link Grant, the Rolex Protégé Arts Initiative, Company in Residence at New York Theater Workshop, New York State council for the Arts Grant, The Rosenberg Foundation Grant, Alpert Award, Greenwald Foundation Grant and The Mental Insight Foundation Grant, The Watermill Center Resident Artist, and a Sundance Theater Lab resident artist.

Polendo has an MFA in directing from the UCLA School of Theater, an M.A. in non-Western theater from Lancaster University in the U.K., and a B.S. in Biochemistry from Trinity University in Texas. Based in both New York and the United Arab Emirates, Polendo continues to create, develop and present work in the US and internationally.