An Online International Workshop on the Politics of Asian Cinema Practices 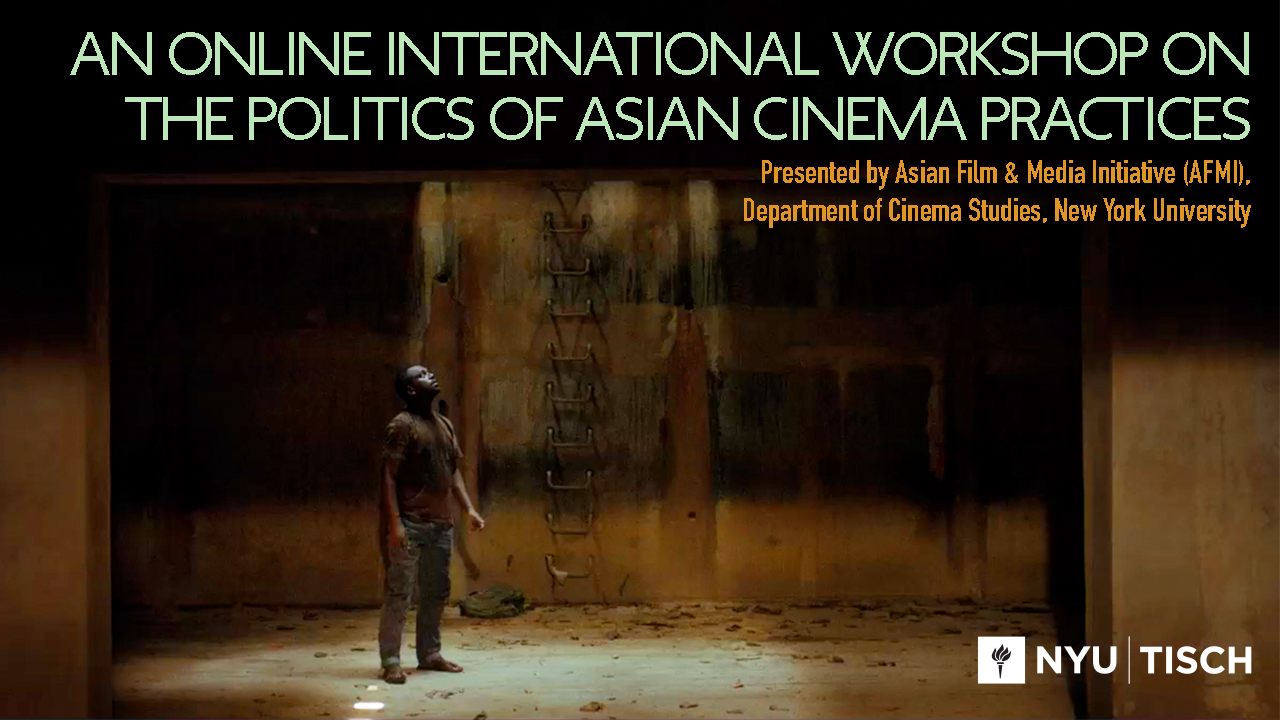 This international workshop presents some of the most exciting new research on cinema practices including eco-feminist genre film in India, Taiwan queer cinema, Singapore trans/national film infrastructure, strategies and politics of restoration and preservation in Indonesia and Thailand. The workshop inaugurates a series of events for developing and eventually launching the collective publication project, Routledge Companion to Asian Cinemas.

The 1980s in India witnessed the simultaneous emergence of women’s movements and of women filmmakers across fictional and non-fictional formats. While “real life” is typically the province of the documentary filmmaker, fiction films made by women directors such as Sai Paranjpe, Kalpana Lajmi, Aruna Raje, Aparna Sen were often based on contemporary events and show an engagement with the news. Since women were in the news, the need to respond to gender’s contemporary salience was particularly felt by women filmmakers. However, gender was always approached “intersectionally” and articulated within a wider net of social concerns including caste discrimination, poverty, unemployment, the environmental crisis etc. This paper will focus on three films – Aruna Raje’s Geherayee (1980), Sai Paranjpye’s Papiha (1993) and Aparna Sen’s Yugant (1995) – to show how each explores possible alliances between the women’s movement and ecofeminist organizing around environmentalism and environmental justice from Chipko through Jungle Bachao Andolan to Navdanya and big dam protests. Though based on contemporary events, these films activate genre aesthetics – horror, romance, melodrama – to explore the difficult work of coalition-building across class differences and divergent life worlds. In contrast to the documentary’s ethnographic exploration of environmental movements, these fiction films use genre to imagine politics as an encounter with otherness, always structured around uneven access to power and representation.

With the legalization of same-sex marriage in mid 2019, Taiwan has become the first (and only) country in Asia that allows same-sex couples to officially enter marital status. This marks a milestone for the LGBTQ movement in Taiwan, and thousands of same-sex couples have indeed benefited from this initial law modification. However, is marriage equality the end of LGBTQ activism? What are the issues beyond the current state of marriage? In the meantime, with the transnational popularization of the boys’ love (BL) genre in recent years, BL has also become an institutionalizing force in Asian media production and consumption. How has Taiwan queer cinema responded to the BL genre? What can be its discontents vis-a-vis BL? Against the dual institutionalizing forces of same-sex marriage and BL, this chapter highlights the themes of local historical context, diverse familial formation (duoyuan chengjia), and diverse gender/sexuality, alongside the trend of Sinophone articulation. Films for focal discussion will include Your Name Engraved Herein (Liu Kuang-hui, 2020), Dear Tenant (Cheng Yu-chieh, 2020), Alifu: The Prince/ss (Wang Yu-lin, 2017), and Miss Andy (Teddy Chen, 2020, Taiwan/Malaysia).

Shi-Yan Chao is a research fellow at Chulalongkorn University, Bangkok, Thailand. He holds a PhD in Cinema Studies from New York University, and was an INTERACT postdoctoral fellow at Columbia University. In addition to NYU and Columbia, he has also taught at Hong Kong Baptist University. His publications include Queer Representations in Chinese-language Film and the Cultural Landscape (Amsterdam University Press, 2020) and articles on transnational media, independent cinema, film history, creative/media industries, and vocal performance.

On the Verge of Quitting: The Cinema of a Transnational Hub

This essay identifies a tendency in contemporary Singapore cinema to reify its post-independence history of development, during which the island has leveraged its position in the global supply chain. First as a colonial port city, then as a shipping and transportation hub, Singapore has invested massively in infrastructure to support its financial services, petroleum refining, and telecommunications sectors. But the multicultural and cosmopolitan city state, caught in perpetual redevelopment, has struggled to define its identity. Recent films have however come to dwell on the material conditions that constitute Singapore’s existence. Through visual style and narrative form, they acknowledge the country’s function in global capitalism as a transnational service hub. Informed by world systems theory and in particular, Anna Tsing’s research on capitalist supply chains and labor, close readings of Ilo Ilo (2013), A Yellow Bird (2016), The Apprentice (2016), Shirkers (2018), and Wet Season (2019) reveal a thematic preoccupation with transition and mobility across the core-periphery binary.

Gerald Sim is an associate professor of Film Studies at Florida Atlantic University. His research and teaching are grounded in theoretically informed film and media studies. Sim published The Subject of Film and Race: Retheorizing Politics, Ideology, and Cinema (Bloomsbury, 2014) and Postcolonial Hangups in Southeast Asian Cinema: Poetics of Space, Sound, and Stability (2020).

A Reflection on Film Restoration, Acculturatie and Democracy - The Case Studies of Lewat Djam Malam and Aladin

This article discusses the restoration of Lewat Djam Malam (1954) which opened up discussions about film restoration in Indonesia. The project was an international collaboration and it was receiving much attention from the press. The restoration solidified the prominence of Usmar Ismail, often addressed as The Father of National Cinema. Its technical standard and budget became a synonym for good restoration. Along with celebration, the process also triggered a sense of inferiority, that without international support and a foreign laboratory a good restoration is impossible for an Indonesian film. The restoration of Aladin (1953) was the writer’s proposition to challenge this. The writer explored the possibilities of low-budget restoration utilizing locally available technology, paying attention to the principles of film restoration ethics. It is also a project to confront the idea that critical cinema was only done by native sons of Indonesia. The Aladin restoration was an opportunity to discover the diversity of post-colonial cinema culture through the work of Tan Sing Hwat, a Chinese descent who adapted a cosmopolitan tale to convey political messages. The two case studies show that restoration technology should be connected with strategies and ideology to ensure diverse perspectives about the past.

When writing about the history of LGBT Thai films, many writers and researcher took the famous Pleng Sud Tai (The Last Song, 1985, Pisal Akaraseranee), a tragedy romantic drama, as the beginning of the history. Actually, we have found in the Thai Film Archive (a public organization) early Thai films depicting LGBT characters since 1950s. For example, Kathoey Pen Het (It’s all because of a Lady boy, 1954, Ledger) was the amateur comic short portraying a beautiful lady boy character who is mistaken by a group of men. This portrayal of lady boy as a comic character has long been a staple of Thai media, but this film, by making the lady boy a fiancée of one of the men, displays a progressive attitude. It is undeniable that these Thai films might have been overlooked because of their unavailability in the market. This article will present the list of Thai films in the Thai Film Archive that help filling the gap of the early history of LGBT Thai films. Moreover, even though the copies of some films may not be available or discovered, we will turn to film-related materials, such as screenplays and film magazines collection in the Thai Film Archive to put together an account.

Sanchai Chotirosseranee holds a Bachelor’s degree from the Faculty of Journalism and Mass Communication, Thammsat University, Thailand, and a Master of Arts in Film Studies from the University of East Anglia in the United Kingdom. He is currently the Deputy Director of the Thai Film Archive (Public Organization), Thailand. He takes charge of supervising administration department, strategy and planning department, and the Thai Film Institute. He is also one of the programmers of the Thai Short Film and Video Festival, Salaya International Documentary Film Festival and Silent Film Festival in Thailand.

Atit Pongpanit is a lecturer at Naresuan University, Thailand. She holds a PhD in Southeast Asian Studies from SOAS, University of London. Her areas of focus include cultural studies, cinema, literature, media, and genders and sexualities with reference to Thailand and South East Asia.