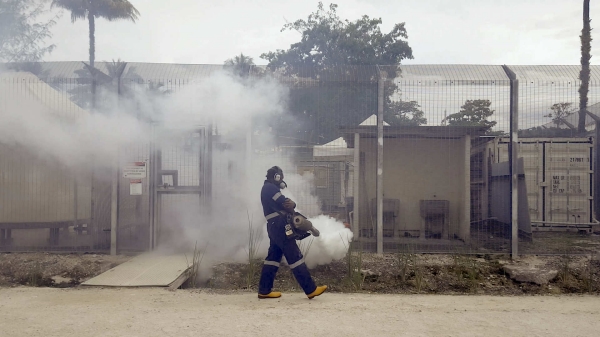 In a world of intensified border regimes, indefinite detention, and mass deportation, what role can the moving image play? This event features screenings of two recent documentaries from within migrant detention centers, seeking to open a discussion about new fugitive pathways and emerging filmmaking practices in the face of militarized borders.

The main feature of the evening, Chauka, Please Tell Us the Time, was filmed by the Iranian-Kurdish writer and activist Behrouz Boochani on a cell phone from inside the Manus Island detention center in Papua New Guinea, while he was detained there. The footage was smuggled out and edited by Boochani’s co-director, Arash Kamali Sarvestani. It is at once a crucial document of an ongoing structural dispossession and an aesthetic meditation on time and confinement. Both co-directors will join via Skype in a conversation with Anne McNevin, author of Contesting Citizenship: Irregular Migrants and New Frontiers of the Political (Columbia University Press, 2011).

The event is organized by Christian Rossipal in collaboration with the Department of Cinema Studies at NYU and the NYU Center for Media, Culture and History.

Articles in The Guardian by Behrouz Boochani.

NPR on Behrouz Boochani’s book, No Friend But The Mountains: Writing from Manus Prison.

What we owe to the refugees on Manus by Anne McNevin.

Sharam Khosravi on the concept of Stolen Time.