BlaxploItalian is a diasporic, hybrid, critical, and cosmopolitan dimension documentary that uncovers the careers of a population of entertainers seldom heard from before: Black actors in Italian cinema starting from 1915 when the first black actor appeared in an Italian film.BlaxploItalian cleverly discloses the personal struggles classic Afro-Italian; African-American; Afro-Caribbean and African diasporic actors faced, correlating it with the contemporary actors who work diligently to find respectable and significant roles.

Film screening will be followed by a discussion with the director, Fred Kuwornu, and Ed Guerrero (Cinema Studies, NYU). 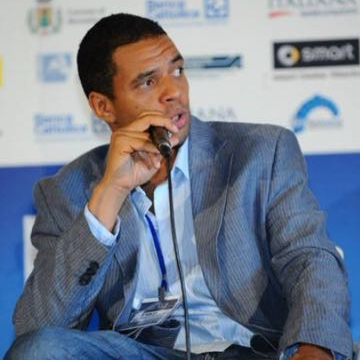 Fred "Kudjo” Kuwornu is an Italian-Ghanaian activist-producer-writer-director, was born and raised in Italy and based in Brooklyn. His mother is an Italian Jew, and his father a Ghanaian surgeon who lived in Italy since the early 60's. Fred Kuwornu holds a Bachelor’s degree in Political Science and Mass Media, from the University of Bologna.

After his experience, working with the production crew of Spike Lee’s “Miracle at St. Anna”, Fred decided to research the unknown story of the 92nd Infantry “Buffalo Soldiers” Division, discovering and documenting the journey taken by the real 92nd Infantry veterans, and the entire African American segregated combat unit, which fought in Europe during WW II. In 2012, he released "18 IUS SOLI "which examines multiculturalism in Italy but also specifically looks at questions of citizenship for the one million children of immigrants born and raised in Italy but are not yet Italian citizens.

He is the founder of the Do The Right Films Entertainment a company production based in New York which promotes the importance of racial and ethnic diversity in Italy and Europe using film and other art forms as tools for building a more inclusive society.