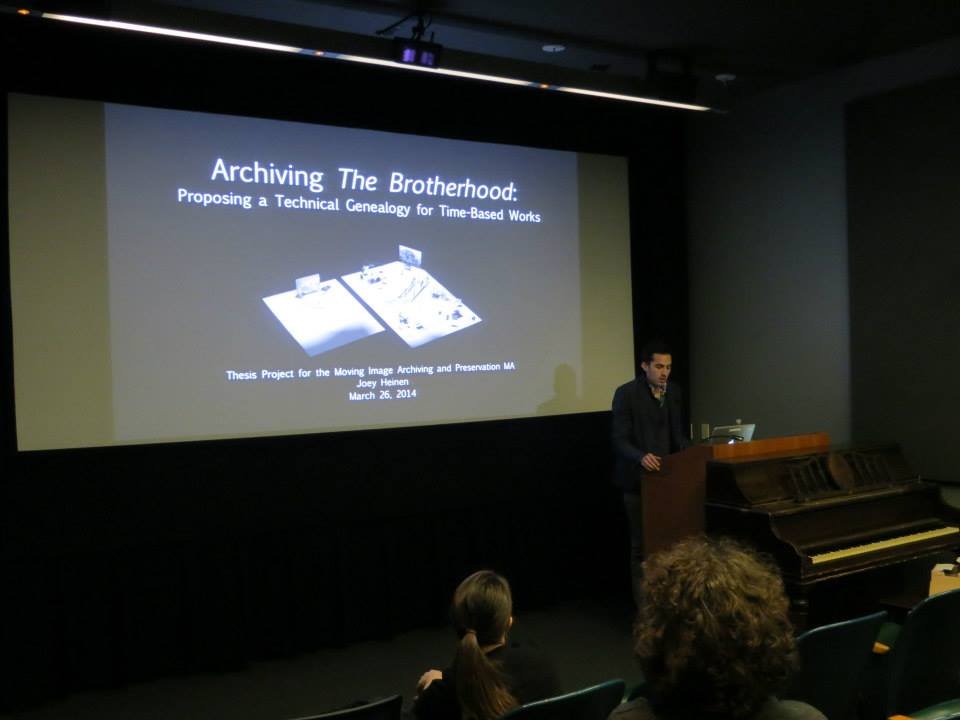 Students in the Moving Image Archiving and Preservation (MIAP) program will present their M.A. thesis projects, covering a wide range of topics such as preserving malware, the video installations of Buky Schwartz, archiving hip-hop culture, and the differences between musicals on-stage and on-screen. All sessions will be held in the NYU Cinema Studies department at 721 Broadway, 6th Floor in the Michelson Theater (Room 648) and will be open to the public. See below for a complete schedule and presentation descriptions.

10:00 AM - 11:00 AM
Michelle Krause - Why Academic Libraries Hate Netflix: Digital Copyright and the Challenge of Acquiring and Providing On-Demand Streaming Media for Classroom Use

This thesis will discuss the importance of streaming in the teaching environment and the legality of using personal streaming accounts, such as Netflix and Amazon, as teaching aids in the classroom. Case studies will also be reviewed which analyze how academic libraries incorporated Netflix subscriptions into circulation in order to acquire audiovisual media.

10:00 AM - 11:00 AM
Shu-Wen Lin - From Virtual to Reality: Dissecting Jennifer Steinkamp’s Software-Based Installation

Time-based and digital art combines media and technology that challenges traditional conservation practices while requiring dedicated care. As a pioneer in media art, contemporary artist Jennifer Steinkamp is critically acclaimed for her abilities to weave digital media into large-scale installations that envelop the audience vis-a-vis streams of moving images. In this paper, I use Steinkamp's animated installation Botanic that will be exhibited in Time Square Arts: Midnight Moment as a case study. Through carefully disassembling the artist's creation process, I attempt to focus on the internal structure and relationship between Maya, After Effects, scripts, and final video. I strive to provide a risk assessment that will enable museum professionals as well as the artist herself to identify sustainability and compatibility of digital elements in order to build a documentation that can collect and preserve the whole spectrum of digital objects related to the piece.

Buky Schwartz (1932-2009) was an Israeli-American conceptual artist whose work focused on the nature of perspective and perception. Schwartz worked in many different art forms, but he is best known for his single-channel video works, and video installations. Trained as a sculptor in Tel Aviv, Schwartz studied at St. Martin’s School of Art during the 1960s, and moved to New York in the late 1970s where he began experimenting with video in his SoHo studio. His work was quickly noticed by John Hanhardt, a curator at the Whitney Museum of American Art, who included Schwartz’s Yellow Triangle (1979) in the Whitney’s Re-Visions exhibition in 1979. Schwartz’s video installations often involve a distorted, unrecognizable pattern in real space, which, from the privileged perspective of a video camera, forms a coherent image fed to a monitor in the gallery in real-time.  Concerned with the psychological process of perceiving three dimensional space, the artist’s video installations are often large, made up of a variety of materials, and must be installed to be appropriately experienced. As the nature of such a work is accumulated through multiple components, iterations and concepts, rather than any one particular object or thesis statement, the dizzying array of variables and treatments can easily become overwhelming. What are the limits of Schwartz’s installations? How rigid an interpretation is restrictive? How flexible can a work be before it loses its identity?

By accumulating relevant and significant forms of documentation, while examining the artist’s oeuvre and creative process, I hope to answer some of these questions. Correspondence between the artist and curators, photo documentation of installations, sketches and models created as studies, interviews with the artist and interviews with his collaborators were all reviewed and compiled to develop a comprehensive understanding of Schwartz’s installations. Using this information, garnered from the artist’s personal archive, the records from multiple museums, and published sources,  I will outline prescriptive preservation policies for video installations which have not been exhibited in decades.

The preservation of malicious software, also known as malware, as a digital object for serious historical and cultural study has thus far been largely ignored by cultural heritage institutions. Yet malware is a “pervasive feature of the internet” and constitutes part of the texture of digital life. This project attempts to develop a more nuanced discussion in the archival community about collecting malware or choosing to remove it, appraising its historical value, assessing the risks of storing it, and determining how to properly document its existence and potential removal.

Presented as part of a Capstone Portfolio, Martha Diaz synthesizes her journey from documenting to preserving hip-hop culture by highlighting her archival and curatorial work during the MIAP program. Collections include:

From the mid-1950s to the early 1980s, Harold and Lynn Rhodes Mayer created an incredible body of work that includes L’CHAIM - TO LIFE, the Oscar-nominated THE INHERITANCE, pieces for National Educational Television such as THE WAY IT IS and TROUBLE IN THE FAMILY, and the CBS science  program CONQUEST. This presentation covers the history of the Mayer documentaries, and the work done at the Wisconsin Center for Film and Theater Research to ensure that these rare films are not only preserved, but also can be seen again for the first time in decades.

10:00 AM - 11:00 AM
Laurie Duke - Personal Portmanteaus and Preservation Persuasion

As part of a capstone portfolio, I will look back at my initial motivations and early efforts to foster collaboration between artists and archivists; use that lens to review projects that I have completed over the past five years; and present a case study of my current initiative to create a preservation continuum between artist, collector, and archivist.

What are the differences between staging a musical for Broadway and staging a musical for film? This study analyzes what is gained and lost when a Broadway musical is adapted for film and, conversely, when a musical that began its life on film is adapted for the stage. Ultimately, we will discuss the importance of capturing the ephemeral nature of a staged performance and the preservation of musicals from stage and film as an invaluable tool for artists and historians researching its cultural significance.

For the analog video formats that require (or greatly benefit from) the stabilizing presence of a time base corrector (TBC) or frame synchronizer during digitization, the selection of TBC/synchronizer is second only to that of the videotape recorder itself. Yet despite the critical roles played by these remarkable, increasingly obsolete machines (some of the earliest of analog-to-digital video conversion devices), their inner-workings remain a mystery to many of those responsible for reformatted video materials.

In this thesis project, I will look into the history, operations, and obsolescence of time base correctors, critical pieces of any video digitization system.

Preserving a film's history is more than making sure there is access to it. Costumes in film serve as a way to preserve the experience and memory of the audience who continue to expand the value (both financial and emotional) of iconic American classics. By examining Gone with the Wind, The Wizard of Oz, and Letty Lynton the goal is not to ask why costumes are inherently so fascinating to fans of these particular films, but to what extent films and costumes lead such separate lives outside of the original performance that they create their own histories.

My thesis will explore, through project based work and case studies, the state of Third World Newsreel (TWN) collections past and current. I will focus on the path for preservation for four TWN film titles, provide historical context on the organization's production output and short-lived exhibition space, and finally recommend best practices to preserve their current born-digital productions, along with their historical film-based work.