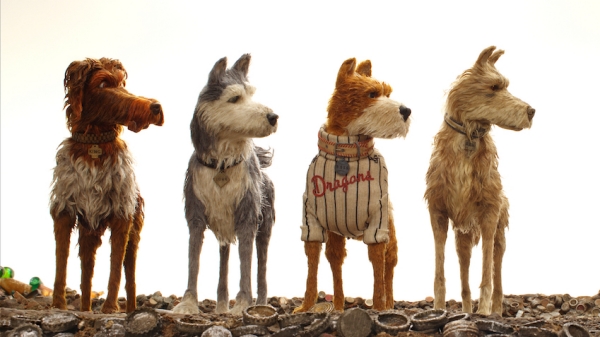 Join us for an evening with faculty members Anna McCarthy and Dan Streible for a fun discussion designed to follow a viewing of director Wes Anderson's animated comic-dramatic sci-fi movie Isle of Dogs (2018). Voiced by a long list of celebrity actors, the dogs and humans in a near-future Japan confront a dystopia in which dogs are deported to an island because of an influenza pandemic.

Forget trains arriving, forget workers leaving the factory. The greatest achievement of early cinema was the filming of dogs. Comedy: The Whole Dam Family and the Dam Dog (1905). Special effects: Dog Factory (1904). And of course, the first brilliant narrative Rescued by Rover (1905). Not that the dogs care about this history--they have little interest in human stories, designed as they are for our impoverished sensoria. Recall Sharik's quip in Mikhail Bulgakov's 1923 novel, Heart of a Dog: "Why bother learning to read when you can smell meat a mile away?"

So much for dog literature. We can only speculate about what a dog version of the movies would be. We suspect it would be somethinginvisible, and highly odorous, hidden in a pile of leaves. But although we can never know Canine Cinema, we can certainly attest to the enduring power of canines IN Cinema.

In this event, we will delve into some great moments of Dog Cinema from the previous  century and the present one.