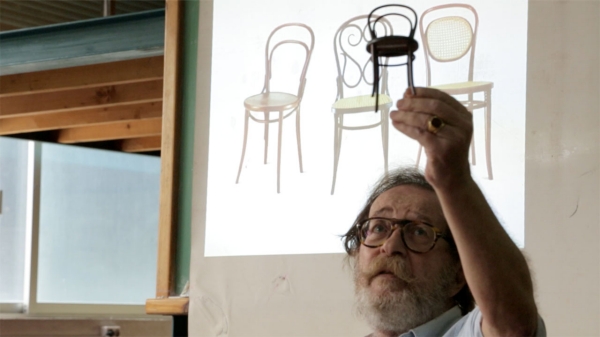 THE COLLOQUIUM FOR UNPOPULAR CULTURE
AND THE DEPARTMENT OF CINEMA STUDIES, NYU present:

HOW TO STEAL A CHAIR (87 min., 2017)
Screening and Discussion with Filmmakers

Stergios Delialis is a pioneering Greek designer, an educator, a champion of Hellenic modernism, and  single-handedly responsible for building up an enormous collection of over 3000 pieces of industrial design. Now he is buried under the weight of his lost dream: the Thessaloniki Design Museum, which initially had a huge international impact and then died a slow and painful death in the 1990s. He is also buried under the weight of the collection itself which is too costly to maintain amidst the financial crisis.

HOW TO STEAL A CHAIR follows Delialis as he realises he has become a ghost in his own life and contemplates - ruefully, ragingly - parting with his collection. A tragi-comic character portrait - it chronicles the retrospective of his own design work he stages in the very building of his lost museum - it's also a pensive essay about memory and museology, the art of creating an ark, the loss of Greek futures.

More information on How To Steal A Chair here.

Free and open to the public

THE COLLOQUIUM FOR UNPOPULAR CULTURE (est. 2007): falling and laughing

KONSTANTINOS KAMBOUROGLOU is a New York-based independent filmmaker and media producer with twenty years of experience in short- and long-form documentary. He has an M.A. in Journalism from Columbia University and is the founder of Gouse Films, Inc.

HEATHER GREER is a New York-based independent filmmaker and media producer with twenty years of experience in documentary and multimedia production. She received her M.A. from the Interactive Telecommunications Program at NYU and is the founder of Black Tartan Media.

TOBY LEE is an artist, anthropologist and Assistant Professor of Cinema Studies at NYU's Tisch School of the Arts. She works across film, video, drawing, and text, and she is currently writing a book on the politics of cultural production in contemporary Greece.