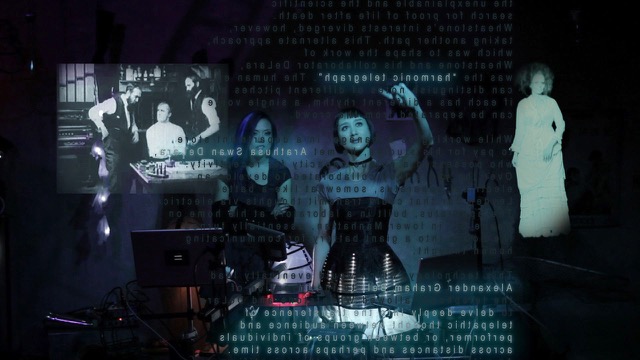 Artist Toni Dove’s work has been engaged in exploring embodied interface to control responsive media, creating immersive narrative experiences. Haunting the Movie will cover a number of her projects that occupy a space at the intersection between cinema, performance and virtual reality.

Toni Dove lives and works in New York. Since the early 1990s, she has produced unique and highly imaginative embodied hybrids of film, performance and virtual reality. In her work, performers and participants interact with an unfolding narrative, using interface technologies such as motion sensing to “perform” on-screen avatars.

Presented in the United States, Europe and Canada as well as in print and on radio and television, Dove's projects include: Archeology of a Mother Tongue, a virtual reality installation with Michael Mackenzie, Banff Centre for the Arts. An interactive installation, Artificial Changelings, debuted at the Rotterdam Film Festival, part of the exhibitions: ‘Body Mécanique’ at the Wexner Center for the Arts, Ohio; at the Institute for Studies in the Arts at Arizona State University International Performance Studies Conference.

Her web site is http://www.tonidove.com