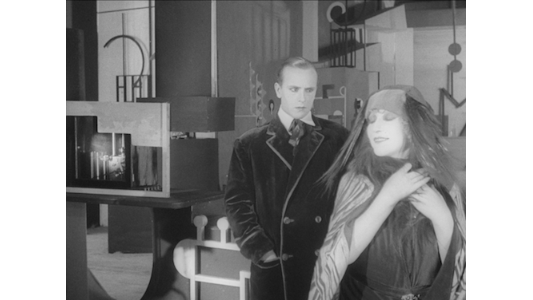 The 1924 film L'Inhumaine by Marcel L'Herbier tells the story of a famous singer played by real-life opera diva Georgette Leblanc and her four suitors, including an idealistic young scientist played by Jacques Catelain. But the real star is the film's style and design, which is why today it's most well-known as a "manifesto for Art Deco."

L'Herbier brought together leading French painters, architects, fashion designers, jewelry designers, musicians, and choreographers together to create a  cinematic project  that he called a " fairy story of modern decorative art."

The screening will include commentary from historian and instructor Samuel Albert.

This event is co-sponsored by the Department of Cinema Studies ( NYU TSOA) and the Center for Applied Liberal Arts (NYU SPS). It is part of the film series Lights, Camera, Deco! A Cinematic Celebration of Art Deco's International Influence * organized in collaboration with the Art Deco Society of New York. See the full list of films here.

RSVP for this screening is required.

The Art Deco style arguably originated at the Exposition Internationale des Arts Decoratifs et Industriels in Paris in 1925, where it left a mark on many designers including Cedric Gibbons,art director for the film Grand Hotel. The Art Deco style would appear in over 1500 films—from Metropolis to The Artist—across the following decades. Art Deco was a truly international style, influencing architecture, fashion, and the design of all objects from perfume bottles to cars. Art Deco moved away from the floral, ornamental patterns of the past to the streamlined, modern shapes of the future. At the same time it embraced and exoticized design motifs from Asia, South America, Egypt, and Africa. Art Deco’s clean and geometric lines complemented the black and white movies of the era and created enduring iconic cinematic images.*