China Crossings: Ethnographic Film In and Of China 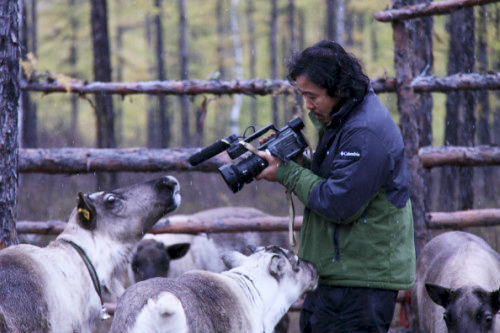 China Crossings: Ethnographic Film In and Of China

On Saturday, November 11, join us for a day of screenings and conversation that brings together anthropologists, film scholars, and filmmakers whose work and practice are integral to thinking about ethnographic film in and of China today.

“China Crossings: Ethnographic Film in and of China” seeks to interrogate the visual ethnographic gaze in China as it has been deployed by filmmakers from differing national and academic backgrounds. The second installation of a three-part series focused on critical engagement with the practices that aim to stabilize ethnographic film as a recognizable category of cultural production, this event centers on the endogenous and exogenous production of the genre of “ethnographic film” within and outside of China. Through screenings and discussions with filmmakers and scholars Ying Qian (Columbia), J.P. Sniadecki (Northwestern), Gu Tao, Zhen Zhang (NYU), and Angela Zito (NYU), this event hopes to call the category of ethnographic film into question while broadly engaging with the genre as a historical and contemporary practice, as well as an artifact and product of anthropological inquiry.

Co-sponsored by NYU's Center for Religion and Media and the Asian Film and Media Initiative in the Department of Cinema Studies.

Free and open to the public. Light refreshments will be provided.

What does it mean to take up calligraphy in a fast-moving world where people often no longer recall the stroke order of unusual words, but can look them up on cellphones? How does it feel being alone, together, spending long hours training your body to write while slowly mulling over your life with others? Writing in Water follows two generations of calligraphy teachers, Wang Tongxing and Liu Lanbo, 王童性 刘兰波through the eyes of an American who learned to write with them, in Tuanjiehu Park, Beijing, where they practice on the plaza every day. We encounter directly the funny, philosophically inclined teachers and the community of students, people who have been retired, left behind by China’s get-rich quick reforms. We see them together in the park and alone at home. With their students they connect past to present, master to pupil, friend to friend, making a community, making Chinese characters that slowly materialize, and that last long after the water has evanesced into air. In Mandarin, English subtitles.

Angela Zito writes, teaches and curates at NYU where she is an Associate Professor in Anthropology and Religious Studies Program, and an associate faculty in Cinema Studies. She co-founded and co-directs the Center for Religion and Media and has co-curated the biennial documentary film festival ReelChina@NYU since 2006 with Zhen Zhang of NYU Tisch Cinema Studies. Her first documentary film, Writing in Water (2012, 42 min) was​ part of a study in Beijing about its “third spaces,” places where people congregate and make things, using the opportunity to create new public spaces as they produce cultural expressions. Zito writes about media and mediation, and their ethical, activist implications, including embodied performance, text and film, and digital media. ​ Her current project is on state propaganda mediations of filiality. ​

People’s Park is a 78-minute single shot documentary that immerses viewers in an unbroken journey through a famous urban park in Chengdu, Sichuan Province. The film explores the dozens of moods, rhythms, and pockets of performance coexisting in tight proximity within the park’s prismatic social space, capturing waltzing couples, mighty sycamores, karaoke singers, and buzzing cicadas in lush 5.1 surround sound. A sensory meditation on cinematic time and space, People’s Park offers a fresh gaze at public interaction, leisure and self-expression in China.

J.P. Sniadecki is Assistant Professor of Radio/Television/Film at Northwestern University, and a filmmaker and anthropologist active in China and the United States. whose films explore collective experience, sensory ethnography, and the possibilities of cinema. His films include Chaiqian/Demolition (2010), winner of the Joris Ivens Award; Foreign Parts (2010), winner of two Leopards at Locarno and named Best Film at the Punto de Vista Film Festival and DocsBarcelona; People’s Park (2012), named Best Anthropological Film at Festival dei Popoli; Yumen (2013), named Best Experimental Film and Best Chinese Film at the Taiwan International Documentary Film Festival; andThe Iron Ministry (2014), A.O. Scott's "Critics Pick" in the New York Times winner of the top prize at L'Alternativa Film Festival and jury prizes at the Ann Arbor Film Festival, Valdivia, and Camden. Co-organizer of the traveling film series “Cinema on the Edge" and "China Now," which showcase independent cinema from China, he has written articles and interviews for Cinema Scope and contributed essays to Visual Anthropology Review and the edited volume DV-Made China (Hawaii University Press).

In the forests and mountains of northeastern China live the Evenki, a nomadic people that migrated 300 years ago from Siberia and now comprise one of the 56 officially recognized ethnic groups in China. The Evenki live independently by hunting and breeding reindeer. In 2003, they were forced to move from the forests to a new settlement built by the government. Aoluguya, Aoluguya is the first part of Gu Tao’s trilogy in which he follows an Evenki family. The second two parts were Yuguo and His Mother (2011) and The Last Moose of Aoluguya (2014). Gu Tao lived with the Evenki for years and was responsible for directing, camera, production, sound and editing.

Gu Tao is an award-winning experimental and documentary filmmaker. His works have been screened at the International Film Festival Rotterdam, Yamagata International Documentary Film Festival, Toronto International Film Festival and other festivals. Born in Inner Mongolia, China, Gu graduated in 1995 from Inner Mongolia Art College with a major in oil painting, and studied photography at the China Academy of Art in Beijing before studying at the Mel Hoppenheim School of Cinema, Concordia University in Montreal. Gu Tao’s documentaries deal directly with minority lives in China’s northeast.

Zhen Zhang is Associate Professor at the Department of Cinema Studies at New York University's Tisch School of the Arts, and director and co-founder of the Asian Film & Media Initiative. Her research and publications focus on Chinese film history (including China, Taiwan, and Hong Kong), melodrama, childhood, feminism/gender, and independent cinema.

Ying Qian is Assistant Professor in the Department of East Asian Languages & Cultures at Columbia University. Her areas of interest include Chinese literature, cinema and media studies, including documentary cinema in comparative perspectives, experience and memory of China’s revolutions and socialism, and writing, translation and filmmaking in China’s multi-lingual and multi-ethnic border regions and among the Chinese diaspora.

Melissa Lefkowitz is a PhD Student in the Department of Anthropology and Certificate Program in Culture and Media at New York University. She is the co-director of China Remix (2015), a short documentary about the everyday lives of three Nigerian and Ugandan musical entertainers who live and work in Guangzhou, China.

Luyao Ma, MA Student, Department of Cinema Studies at New York University’s Tisch School of the Arts. Her research interests include nontheatrical films and videos made in China, ranging from socialist-era educational films on ethnic groups to videos created by contemporary NGO organizations.