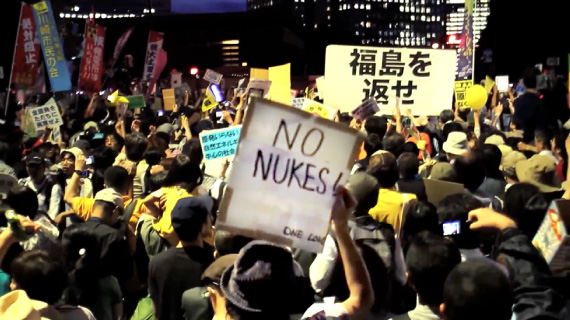 The director Eiji OGUMA, a professor of the Faculty of Policy Management at Keio University, will present the documentary "Tell the Prime Minister" (109 minutes).

There will be Q&A after the film with Professor Oguma.

Sponsored by the Dept of East Asian Studies, Dept of History, and the Asian Film and Media Initiative in the Department of Cinema Studies.

After "Occupy Wall Street" in New York, and before the "Umbrella Revolution" in Hong Kong, 200 thousand people surrounded the Prime Minister's office in Tokyo for an anti-nuclear demonstration. However, this incident was not reported extensively by the media and subsequently went unnoticed by the world.

This documentary film captures the anti-nuclear protests in Tokyo after the Fukushima nuclear incident in March 2011. The theme of the film is the crisis that democracy faces, and the reconstruction of democracy.

The film is composed of interviews with eight individuals and footage from that time. The eight people who appear include a former Prime Minister, an evacuee from Fukushima, a political activist, a shop clerk, an artist, a hospital worker, and a businessperson, both Japanese and non-Japanese. The film describes how these people from diverse backgrounds converged amidst the crisis.

Video recordings cited in the film show the terrifying experiences of the nuclear disaster, anti-nuclear demonstrations, speeches, and the official meeting between activists and the Prime Minister. The videos were shot by independent citizens and uploaded to the internet. We sought permission to use footage from each person after explaining our intentions. As such, each person voluntarily provided their videos to us.

A groundbreaking film created in a unique and unprecedented manner.

Eiji OGUMA（小熊英二） is a professor of Faculty of Policy Management at Keio University in Tokyo. His researches cover the national identity and nationalism, colonial policy, democracy thoughts and social movements in modern Japan from the view of historical sociology. He has earned 6 prizes for his published works in Japan. He has participated and gained credibility in anti-nuke movement in Tokyo after Fukushima incident. This is his first film work which was completed by cooperation of many activists and voluntary filmers.