Laura Mulvey and Peter Wollen: Beyond the Scorched Earth of Counter-Cinema 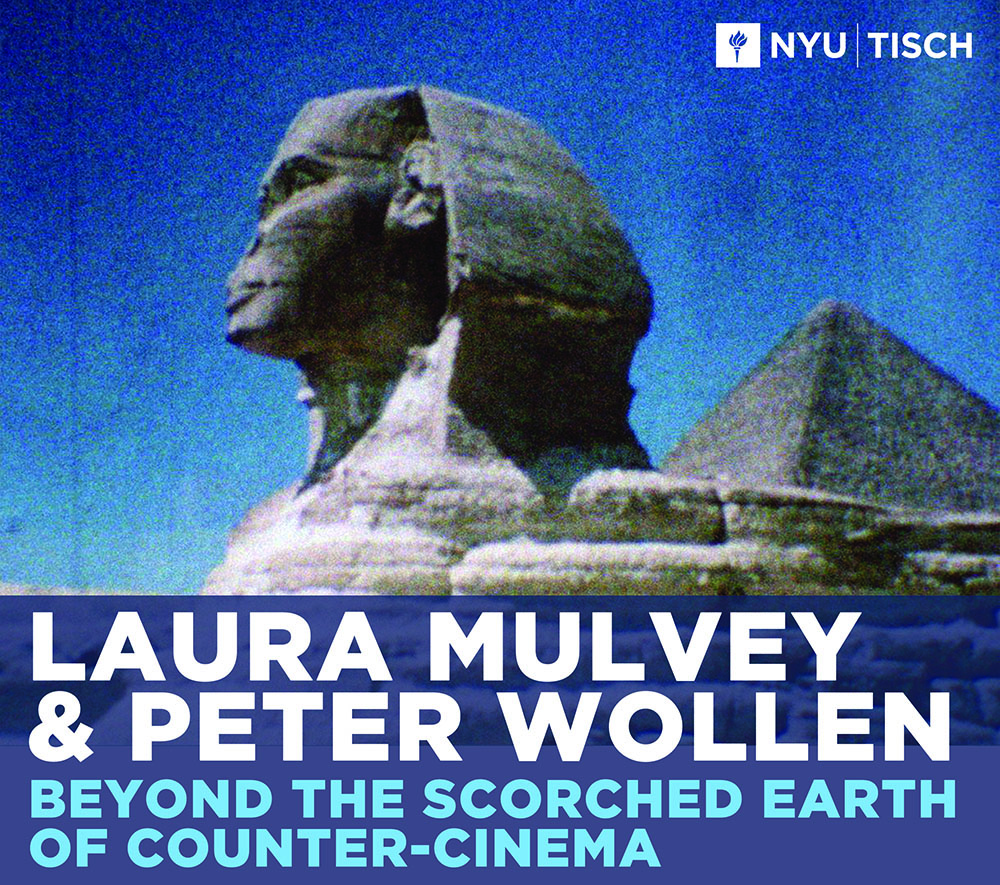 Laura Mulvey (b.1941) and Peter Wollen (b.1938) have long been celebrated as groundbreaking film theorists. Decades after their first publication, texts such as ‘Visual Pleasure and Narrative Cinema’ (1975) and Signs and Meaning In The Cinema (1969) - which wrestle with and brilliantly conjoin elements of semiotics, feminism, psychoanalysis and theory - are still widely read and debated.

Less known, especially in the United States, are the equally ambitious essay- and theory-films that they made together between 1974 and 1983. Informed and inspired by the Women’s Movement, post-Godardian Modernism and Latin American Third Cinema, they sought to create a new cinematic language that could address submerged feminist histories, the politics of desire and of the gaze, the neoliberalisation of the imagination.

Laura Mulvey and Peter Wollen: Beyond The Scorched Earth of Counter-Cinema, curated by Oliver Fuke, places these rarely-screened collaborations alongside a range of works made for television. Mulvey herself will be present for all screenings; there will also be contributions from and appearances by collaborators such as Yvonne Rainer, Tilda Swinton and Vitaly Komar.

In 1987, Wollen made his only solo feature film, Friendship's Death, a science fiction narrative set in the recent past. The stunning film sees Sullivan (Bill Paterson), a British journalist covering the 1970 Palestinian-Jordanian conflict, cross paths with Friendship (Tilda Swinton), an extraterrestrial robot sent as a peace envoy from a distant galaxy. Having missed her intended destination, she lands in Amman, Jordan, without the necessary papers and is picked up by a PLO patrol. Sullivan comes to her aid and the two embark on a series of dialogues in adjoining hotel rooms. This narrative device allows Wollen to ask questions about the place of machines in human culture, the relation of reason and violence, and the strangeness of the human body. Friendship’s Death, which Wollen originally published as a science fiction story, employs the figure of the extraterrestrial both as a metaphor and a way to reflect on a particular moment in history.

In 1977, Mulvey and Wollen made their most widely seen and influential film, Riddles of the Sphinx. This film, which was their second collaborative work, is directly related to their independent intellectual work. It is comprised of seven discrete sections, arranged symmetrically, and features a number of stunning 360-degree panning shots. The motif of the circle, present in both the camerawork and Mike Ratledge’s electronic soundtrack for the film, meshes neatly with the film’s overarching concerns: the circular nature of problems relating to motherhood in patriarchal society. Riddles of the Sphinx is widely regarded as one of the most important avant-garde films of the 1970s.

In 1974, Mulvey and Wollen made their first film together, Penthesilea: Queen of the Amazons. This film, which is comprised of five chapters, is concerned with women’s relation to myth and language. Penthesilea is a key example of what might be called counter-cinema. The film’s chapters are made up of sequence shots intended to subvert the conventions of editing. Here, the length of a role of 16mm film determined the length of the shot, as opposed to the director’s choice or control, as in traditional Hollywood cinema. Penthesilea is also testament to Mulvey and Wollen’s longstanding commitment to mixing and combining different media and approaches to filmmaking, which continues throughout all their collaborative films. Its five chapters respectively focus on theatre, spoken-word, the plastic arts, film and television. Thus the film, despite its negation of editing, is a montage of these different media.

In 1994, Mulvey made Disgraced Monuments with artist/filmmaker Mark Lewis. This film intertwines interviews with an array of figures – sculptors, inspectors of public monuments, art historians, and museum directors – in order to investigate the fate of public monuments built in the former Soviet Union since 1918, following a government resolution issued by Vladimir Lenin and Anatoly Lunacharski. On one level, the film is concerned with Lenin’s plan and the history of these specific monuments. However, on a more general level, it explores the unstable meaning of monuments and how they are often destroyed during times of social and political upheaval.

In 2013, Mulvey and Lewis, together with Faysal Abdullah, made 23rd August 2008. The film consists of a brief opening shot of the Al Mutanabbi Street book market and an uninterrupted monologue by Abdullah. He describes his relationship with his brother, Kamel, and, in the process, evokes the lives of Iraqi intellectuals of the left, driven into exile in the early 1980s.

In 1980, Mulvey and Wollen made AMY! This short film took the fiftieth anniversary of Amy Johnson’s solo flight to Australia as its starting point to explore a number of questions relating to the image of the heroine. It is a film that, as Mulvey once described, deals with “the narrative spheres allotted to female protagonists, and the fate of a heroine who adopts an active relation to narrative space and resists the intimidating look of the camera in its role as sculptor of passive femininity.” The film employs a range of strategies, such as re-enactment and reconstruction, and combines different types of imagery. Its soundtrack is also a kind of collage, bringing together sounds from the Feminist Improvising Group and X-Ray Spex. AMY! is also replete with references, including the words of Bryher, Amelia Earnhardt, Lola Montez, Gertrude Stein (read by Yvonne Rainer).

In 1982, Mulvey and Wollen made Crystal Gazing. Set during Margaret Thatcher’s first administration, it is concerned with the lives of four ‘cultural workers’ – a science fiction illustrator, a saxophonist, an analyst of satellite photography and a confused PhD student – who are trying to make their way in London. The film is typically presented as Mulvey and Wollen’s most narrative film; yet the characters are lost, disoriented, and face uncertain futures at a time of recession. Will they be pulled in, or dragged under, by the workings of new capital? The film is comprised of a series of tableaux and employs a single-shot strategy. One of the many remarkable aspects of this film is its dialogue with other forms of independent cultural production, most notably comedy, theatre, and music. Its distinctive soundtrack, much of it composed especially for the film, is by postpunk musician Lora Logic.

In 1982, Mulvey and Wollen curated an exhibition of Frida Kahlo and Tina Modotti’s work at the Whitechapel Gallery, London. This hugely influential exhibition, which was the first retrospective of Kahlo’s work outside of Mexico, provided the subject for a documentary Mulvey and Wollen made. Frida Kahlo and Tina Modotti (1983) offers a powerful assessment of both artists’ lives and work. The film includes home movie shots of Frida Kahlo and Diego Rivera at their Blue House in Mexico City, as well as footage of Modotti in the 1920 Hollywood film The Tiger’s Coat. In 1985, Wollen curated an exhibition of Komar and Melamid’s work. He went on to make some documentaries on artists for British television, including Full Cycle: The Art of Komar and Melamid (1991).

Note From the Organizers

We deeply regret that Peter Wollen is unable to be with us at this season of Laura Mulvey and Peter Wollen’s films; for over a decade he has been severely disabled with Alzheimer's Disease. We welcome this opportunity to celebrate his films, and the creative work and ideas he invested in them.

NORA ALTER is Professor of comparative film and media at Temple University in Philadelphia. She is author of Vietnam Protest Theatre: The Television War on Stage (1996), Projecting History (2002), Sound Matters (2004), Chris Marker (2006), and Essays on the Essay Film (2017). Alter has written on artists including John Akomfrah, Daniel Buren, Maria Eichhorn, Stan Douglas, Dan Eisenberg, Renée Green, Hans Haacke, Mathias Poledna, Martha Rosler, and others. Future publications include a single-authored study, The Essay Film after Fact and Fiction and a monograph on Harun Farocki.

MARK FRANCIS is a curator and writer based in New York and London, and is a director of Gagosian Gallery. In 1982 he was exhibition organiser at Whitechapel Art Gallery and worked closely with Laura Mulvey and Peter Wollen on ‘Frida Kahlo and Tina Modotti’. He was director of the Fruitmarket Gallery in Edinburgh when Wollen curated ‘Komar & Melamid’ in 1985, and they later worked together on an exhibition about the International Situationists for Centre Pompidou in 1989.

OLIVER FUKE is an independent researcher and curator. He co-runs [Again] – an organisation seeking to foster an independent intellectual community in London – and previously studied Visual Cultures and Modern European Philosophy. He curated ‘Laura Mulvey and Peter Wollen: Beyond The Scorched Earth of Counter-Cinema’ at the Whitechapel Gallery, London, in May 2016.

VITALY KOMAR was born in Moscow in 1943. In the early 1970s in collaboration with Alex Melamid he co-founded Sots Art, conceptual Pop-Art, reflecting on the visual propaganda and eclecticism. In 1974 his works, as well as works of other underground artists, were destroyed by the Soviet authorities during the Bulldozer show that had not been officially sanctioned. After that, since 1978, he has lived and worked in New York.

LAURA MULVEY is Professor of Film and Media Studies at Birkbeck College, University of London. She was Director of Birkbeck Institute for the Moving Image (BIMI) from 2012 to 2015. She is the author of Visual and Other Pleasures (1989 and 2nd ed., 2009), Fetishism and Curiosity (1996), Citizen Kane (1992), and Death Twenty-Four Times A Second: Stillness and the Moving Image (2006). She has co-edited British Experimental Television (2007), Feminisms (2015), and Other Cinemas: Politics, Culture and British Experimental Film in the 1970s (2017). She made six films in collaboration with Peter Wollen, including Riddles of the Sphinx (British Film Institute 1977; DVD publication 2013), and two films with artist/filmmaker Mark Lewis.

YVONNE RAINER is a MacArthur Fellowship-winning dancer, choreographer (most recently of ‘The Concept of Dust, or How Do You Look When There’s Nothing Left to Move?’), poet and essayist. Her films include Film About A Woman Who … (1974), Kristina Talking Pictures (1976), and Journeys From Berlin/ 1971 (1980)

RACHAEL RAKES is an independent curator and critic, currently serving as a Programmer at Large for the Film Society of Lincoln Center, co-editor of the film section of the Brooklyn Rail, and an Editor at Large for Verso Books. With Leo Goldsmith, she is at work on a book on filmmaker Peter Watkins, which received a 2014 Creative Capital/Warhol Foundation Arts Writers Grant.

PETER WOLLEN was a radical filmmaker, film theorist, and screenwriter, whose crucial book, Signs and Meaning in the Cinema (1969), continues to challenge and provoke. He co-wrote the screenplay for Michelangelo Antonioni’s The Passenger (1975) and subsequently worked outside mainstream cinema, collaborating on six films with Laura Mulvey. His only solo feature, Friendship’s Death (1987), stars Tilda Swinton as an extraterrestrial. He wrote a BFI Classic on Singin’ in the Rain, and his book, Raiding the Icebox (1993), is an alternative history of 20th-century art. His expansive interests included organizing paradigm-shifting art exhibitions, such as ‘Frida Kahlo and Tina Modotti’ (1982) and ‘On the Passage of a Few People Through A Brief Moment In Time: The Situationist International’ (1989).

Presented by the Colloquium for Unpopular Culture with the support of the Department of Cinema Studies, Draper Program, Department of English Literature, Center for the Study of Gender and Sexuality at NYU.