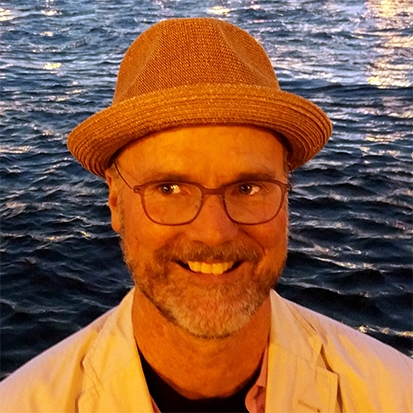 Dan O’Sullivan is the founding Associate Dean of the Emerging Media Institute, including the departments of Game Design, ITP/IMA, Photo and Imaging, and Recorded Music, at New York University’s Tisch School of the Arts. For 12 years he was also the TBS Chair of ITP after taking the reins from Red Burns and has since handed them over to Shawn Van Every. Under his leadership, the department expanded to include IMA, a large undergraduate degree; a global low-residency master's degree; ITP Camp; programs in Shanghai and Abu Dhabi; and moved to anchor NYU’s new Media Technology and Art center at 370 Jay Street Brooklyn.

Dan teaches Creative Computing, as well as electives courses that encourage students to study perception and experience as they create computational media to depict it. In 1992, he taught the first Physical Computing class and led the development of ITP’s renowned makerspace, end of semester show, for that widely emulated curriculum. With co-author Tom Igoe, he wrote the Physical Computing book.

His current research focuses on using image generating machine learning networks as social networks, allowing users to navigate latent spaces as an expression of their individuality. Over three decades, he’s led several large funded research programs and many small ones at NYU doing foundational work at the emergence of digital media.

Before joining ITP full time in 1996, Dan ran a company developing interactive television for clients like HBO, Oxygen and Viacom.  He has also been an Eyebeam Artist in Residence, and an Interval Research Fellow.

In 1991 at Apple Computer, he developed tools for capturing 360 photographs of scenes, objects and one of the first ever 360 videos. Apple commercialized this technology as QuickTimeVR and the techniques are ubiquitous used on the Internet, for instance Google street views and 360 product views on Amazon. As a student and research scientist at ITP, Dan developed interactive television programming including “Dan's Apartment” and “YORB.