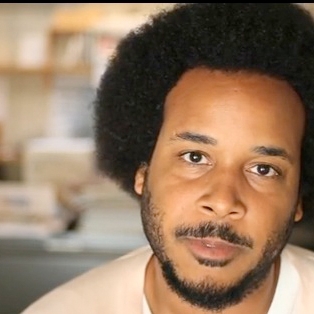 Tahir Hemphill is a creative technologist and creative strategist who has conceived & implemented design-based solutions for the entertainment, advertising, and nonprofit industries.

Hemphill’s practice investigates the role systems play in the generation of form and the role that collaborative knowledge production plays in the resilience of communities.

Hemphill holds a B.A. in Spanish Language from Morehouse College, a Strategic Planning Certificate from Miami Ad School and a M.S. in Communications Design from Pratt Institute — where he authored and designed a treatise on the methodologies of creatives who use traditional advertising techniques to promote socially engaged campaigns.

Hemphill’s artwork is featured in the Talk to Me exhibit at MoMA which explores design and the communication between people and objects. Hemphill’s work has been exhibited at Siggraph (Siggraph 2002); Queens Museum of Art (Queens International Biennial, 2002) and the Schomburg Center for Research in Black Culture (Black New York Photographers of the Twentieth Century, 1999).

Hemphill is a 2016 NEA Visual Arts grantee, the 2016 Media Artist in Residence at Spotify, a 2016 resident at The Rockefeller Foundation Bellagio Center Thematic Month on Human Behavior, a 2015 Bronx Museum of Art AIM Program participant, 2012-2013 Hiphop Archive Fellow at the W.E.B. Du Bois Institute for African and African American Research at Harvard University and a 2013 Fellow at The Frank-Ratchye STUDIO for Creative Inquiry at Carnegie Mellon University.

Since 2010 Hemphill has been operating the Rap Research Lab — a creative technology studio that explores rap as a cultural indicator through educational, editorial, and creative interrogations.

At the Rap Research Lab Hemphill leads a team of researchers, radical educators, technologists, and artists who use the big data analysis of rap lyrics as a lens through which we can better understand popular and youth culture, explore questions of social justice, and facilitate empowerment through community data projects.