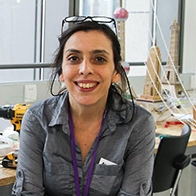 Marianne R. Petit is an artist and educator whose work explores fairy tales, anatomical obsessions, graphic and narrative medicine, as well as collective storytelling practices through mechanical books that combine animation and paper craft. Her interests are in combining technology, traditional book arts, and sequential storytelling to create new forms of narrative for the 21st century. Her movable books can be found in numerous museum and library collections. Her artwork has appeared internationally in festivals and exhibitions, been featured in publications such as Hyperallergic, Make, and Wired, and broadcast on IFC and PBS.

Marianne currently teaches courses in digital media, animation, paper arts, storytelling, and assistive technology. She was a co-founder of the NYU Shanghai Interactive Media Arts Program (IMA), served as its founding director from 2013-2016, and remained on its faculty through 2018. She has taught at the NYU Abu Dhabi campus, was a co-founder of the NYU Ability Project, and is a recipient of the 2016 NYU Distinguished Teaching Award. She currently serves as an Associate Vice Chancellor for Global Network Academic Planning.