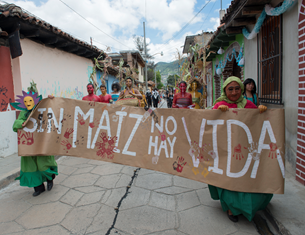 Diana Taylor, Lorie Novak, and Jaques Servin will talk about a course they taught in Chiapas, Mexico in 2013 for graduate students from throughout the Americas.  During the course they collaborated not only with each other but also with indigenous artists and activists.

What are the ethics and limits, politics, and ethics of these collaborations?

University Professor of Performance Studies & Spanish
Founding Director of Hemispheric Institute of Performance & Politics
Diana Taylor, Ph.D., is a University Professor of Performance Studies & Spanish and the Founding Director of the Hemispheric Institute of Performance & Politics at New York University.  She was the recipient of the 2005-2006 John Simon Guggenheim Fellowship, the 2003-2004 Rockefeller Fellowship, and the Modern Language Association Katherine Singer Kovacs Prize for the best book in Latin American & Spanish Literatures and Culture in 2004.  Among her notable publications are: The Archive & Repertoire (2004), Disappearing Acts (1997), and Theater of Crisis (1991).

Professor of Photography & Imaging
Lori Novak, M.F.A. is a Professor of Photography & Imaging at the Tisch School of the Arts at New York University.  A recipient of the National Endowment for the Arts Fellowship, her photographs, installations, and internet projects have been in numerous solo and group exhibitions including: the Museum of Modern Art, New York: Photoville, Brooklyn; ArtSway, Hampshire, England; The Museum of Contemporary Art, Chicago; The Smithsonian Institution, Washington D.C.; and the Victoria and Albert Museum. London.

Visiting Associate Professor of Performance Studies
Jacques Servin, also known as Andy Bichlbaum, is a Visiting Professor of Performance Studies at New York University and is one of the founders of The Yes Men, a culture jamming activist group.  Their exploits in "identity correction" are documented in the films "The Yes Men" and "The Yes Men Fix the World."  In addition to teaching and writing, he is working on a third Yes Man film and on a platform for activism, the Action Switchoard.  He is collaborating with Mark Skwarek on an Augemented Reality project to revolutionize the way museums are experienced.