Kate on Kate: Kate Berlant in conversation with Ann Pellegrini 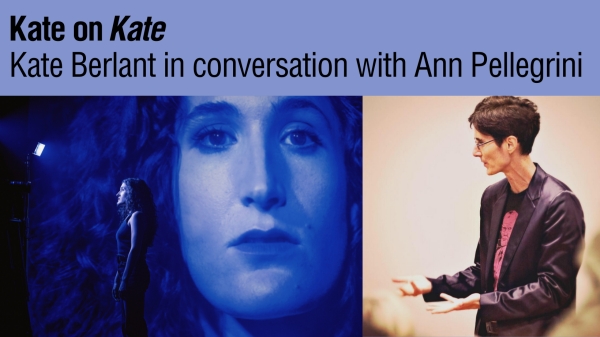 On Friday, September 30th, the comedian, actress, and PS Alum Kate Berlant (M.A. '11) will join the performance studies scholar Ann Pellegrini to discuss Berlant’s newest solo performance Kate (currently in the midst of a sold out run at the East Village’s Connelly Theatre). Topics of conversation may include performance art history, comedy, critique, gender, genre, and the politics of confession. NYU students, faculty, and staff are encouraged to attend in person and non-NYU attendees are invited to join remotely on Zoom.

This event was curated by PS Alum and adjunct instructor Ethan Philbrick.

Kate Berlant is a comedian and actress with notable appearances in Quentin Tarantino's Once Upon a Time in Hollywood, Boots Riley's Sorry to Bother You, and the upcoming Warner Bros film Don’t Worry Darling, directed by Olivia Wilde. She has appeared in television series including Search Party, Transparent, and I Think You Should Leave with Tim Robinson, and will next be seen in A League of Their Own on Amazon Prime. Kate was named a Just for Laughs "New Face of Comedy" and a Variety "Ten to Watch," and can be seen opposite John Early in their sketch comedy special Would it Kill You to Laugh? On Peacock. Kate has performed at festivals across the globe including a sold-out run at the 2018 Edinburgh Fringe Festival, Montreal Just For Laughs Festival and The New York Comedy Festival. Her performances have been commissioned by The Museum of Contemporary Art, Los Angeles, and she has been described by The New York Times as a "magnetic improvisational comic" at the forefront of experimental comedy.

Ann Pellegrini is Professor of Performance Studies & Social and Cultural Analysis at New York University. They are the founding co-editor of the “Sexual Cultures” series at NYU Press and the author/co-author/co-editor of several books, among them: Performance Anxieties: Staging Psychoanalysis, Staging Race; Love the Sin: Sexual Regulation and the Limits of Religious Tolerance, co-authored with Janet R. Jakobsen; and Queer Theory and the Jewish Question (co-edited with Daniel Boyarin and Daniel Itzkovitz). Pellegrini is also a psychoanalyst in private practice in New York. She and Dr. Avgi Saketopoulou received the first Tiresias Paper Award, from the Sexual and Gender Diversity Studies Committee of the International Psychoanalytic Association, for their co-written essay “A Feminine Boy: Normative Investments and Reparative Fantasy at the Intersections of Gender, Race, and Religion.”